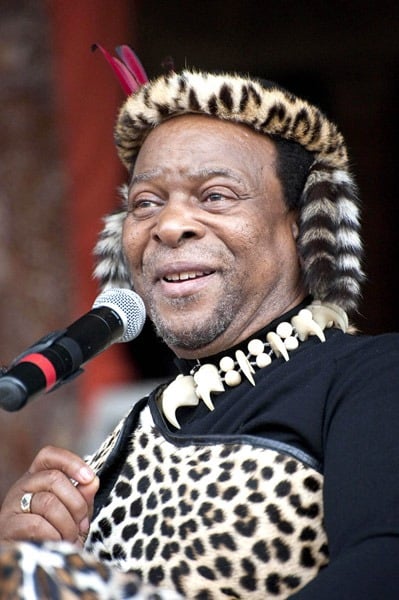 The late AmaZulu monarch, His Majesty King Zwelithini Ka BhekuZulu, was a family friend of my father’s, and later he became my friend and a political ally.

Wena wendlovu! Bayede! The sun has set at midday in the Republic of South Africa as the nation mourns one of its finest monarchs, His Majesty King Goodwill Zwelithini Ka BhekuZulu. ISilo Samabandla sikhotheme! The King is dead. Long live the King!

King Goodwill Zwelithini, who died at the age of 72 of Covid-related complications while being treated for diabetes, was among the famous ceremonial monarchs globally and locally one of the most powerful.

In recognition, President Cyril Ramaphosa has ordered that the national flag be flown at half mast at every flag station in the country from the morning of Saturday, 13 March 2021, until the evening of the funeral service. The funeral service itself has been accorded a special official funeral category 1.

His Majesty passed away in Durban while receiving treatment at the government’s flagship hospital, named after the former African National Congress (ANC) leader, Inkosi Albert Luthuli, on 12 March 2021.

I met King Zwelithini for the first time in 1987. It was fleeting. King Zwelithini visited my father, Mflathelwa Mncube, while I was there at the Ondini Cultural Museum in Ulundi.

The Ondini Cultural Museum is located in the rolling hills and green valleys of the northern part of KwaZulu-Natal. It is built on the same ground that the British army had burnt in the Battle of Ulundi on July 4, 1879. The Battle of Ulundi marked the beginning of an end of the independent Zulu Kingdom, built by its legendary founder, His Majesty King Shaka kaSenzangakhona. Importantly, the museum is located on the reconstructed isigodlo (palace) of His Majesty King Cetshwayo’s Ondini royal residence.

My father was selected as “chief architect” for the iQhugwane (Zulu hut) to restore the Ondini Royal Palace to its former glory in 1981.

I saw men in expensive suits clearing the human path towards my father’s house. As I was about to panic, my father appeared and joined the chant of “Wena wendlovu!” The chant echoed in the nearby rivers. Suddenly I realised that I was face to face with the Zulu monarch.

Earlier that week I had learned with glee that the Nguni cattle I was looking after during my stint in Ulundi belonged to uNgangezwe Lakhe (His Majesty). For the duration of my stay in Ulundi I milked the famous nguni and jersey cows for the benefit of iNdlunkulu (Zulu Royal Household). A driver came every morning to collect the 25 litres of fresh milk designated for the Zulu Royal Household.

This relationship forged with the King in my teens came in handy when the Zulu Royal Household's cracks became visible, like the Pietermaritzburg road potholes in the early 2000s.

In 2005 I began writing a series of articles for the Witness newspaper about the rift between the King and his traditional, self-professed prime minister, Prince Mangosuthu Gatsha Buthelezi. As the rift deepened and I persisted in breaking the stories, the King sent his emissaries to ask, “Whose child are you?”

From that discussion my future with His Majesty was sealed, and the King became my friend and a political ally, unwittingly.

He was always warm and genial towards me. Over time I became aware that he was a “prayer warrior”, having turned his back on youthful truancy, including alleged dagga smoking.

I met the King many times in my various capacities: as Mflathelwa’s son, a journalist, a staff member in the KwaZulu-Natal Legislature, and in 2011 as public relations manager of the Royal Household Trust.

The Trust is charged with looking after the Monarch’s best interests and the Zulu Royal Household as a whole.

I penned the speech delivered in honour of the Prince of Wales, Prince Charles, and the Duchess of Cornwall (Camilla Parker Bowles) during their visit to South Africa, which coincided with the King’s celebration of an uninterrupted 40-year reign.

The last time I spoke to His Majesty in person was in 2011 on his birthday (a prayer day). I drove from Durban to Enyokeni Royal Palace at Nongoma (over 280 km) to deliver the birthday cake. He thanked me profusely for my service to the Zulu Kingdom. He was self-effacing like that, talking about himself in the context of a third person, an institution.

Perhaps what defined my relationship with His Majesty was the tempestuous relationship he had with Prince Buthelezi of the Buthelezi clan. I must confess that, as a good political animal in this explosive conflict of Buthelezi vs the King, I chose sides, that of His Majesty.

Thus when the waters were heated amid the now aborted KwaZulu-Natal (KZN) provincial constitution writing process, the King sent his envoys to find me. We had a private moment in a Durban hotel. The King was full of praise for my reporting on the growing rifts in the Zulu Royal Household. The King shared his long-time unease about the alleged meddling by Prince Buthelezi in the Zulu Royal Household’s affairs.

The following day I penned a story for the Witness beginning with the words: “It’s official – Zulu King Zwelithini did not appreciate his traditional Prime Minister Dr Mangosuthu’s attempt to meddle in his affairs by convening a meeting of Royal House members.”

I am still reeling from the shock that City Press editor-in-chief Mondli Makhanya calls the King the “useful idiot of the apartheid regime”.

At various critical moments of the rupture between the King and Prince Buthelezi, history conspired that I was there.

Perhaps the biggest story I did involving the King related to the public meltdown of his relationship with Buthelezi. It centred on the “2005 controversial Zulu Imbizo”, convened by Buthelezi and snubbed by the King. The long-simmering conflict that split open centred on the differences of opinion related to the KwaZulu-Natal provincial constitutional writing process.

Buthelezi wanted his position (Zulu Prime Minister) recognised in the proposed provincial constitution. In contrast, the King said the Queen Mother should be at the forefront of managing the Zulu monarchy's affairs. His Majesty didn’t support Buthelezi’s proposal to give constitutional recognition to the position of prime minister.

I was the only journalist to break the story, after having had access to the “Zulu Imbizo package” ahead of Imbizo. The package contained Buthelezi’s war-peppered speech and ten resolutions purportedly agreed to by the “Zulu’s Imbizo”, although it was yet to sit.

I wrote in my front-page story how Buthelezi chastised the King for allegedly cosying up to the ANC to protect his interests, not those of the Zulu Kingdom. Buthelezi’s response would lead to a revolt against the King, and what he had said could be interpreted as a unilateral declaration of independence for the province of KwaZulu-Natal.

At that Imbizo, Buthelezi spoke disparagingly about His Majesty.

Legend has it that after the publication of the Zulu Imbizo package, His Majesty was so overjoyed that he ordered every copy of the Weekend Witness, in which the story appeared, to be bought and taken to his Enyokeni palace.

The King had a bereavement just last year after his eldest son, Lethukuthula Zulu, 50, was murdered in his home in Johannesburg.

I am saddened by the untimely demise of His Majesty.

His Majesty King Zwelithini is dead. Long live the King!