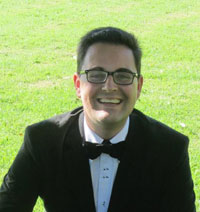 Jonathan Amid was born in Israel and moved to Stellenbosch when he was four years old. He completed his secondary schooling at Stellenbosch High, followed by a BA (Humanities), BA Hons and MA (English Studies, both cum laude) at Stellenbosch University. While his Honours and Master’s research centred on the works of Canadian authors Anne Michaels and Michael Ondaatje, his current research project is a doctoral thesis coming to grips with the explosion of crime fiction novels in English post-apartheid, and since 2006 in particular. He is always contemplating the relationship between texts and their socio-political context, while also very much interested in the Afrikaans crime fiction wave spearheaded by Deon Meyer, post-apartheid South African Literature, narrative theory and film. He is a freelance proofreader, editor and manuscript advisor, writes regular reviews for LitNet, SLiPnet and the Cape Times, and is a part-time lecturer at the English Department of the University of Stellenbosch. It would not be amiss to say that he enjoys the odd book and cup of good coffee.

Seen elsewhere: "I absolutely love being a South African"

"All jokes and memes aside, the mask struggles of our president did more for morale and the statesman's public image than any extended PR campaign could."