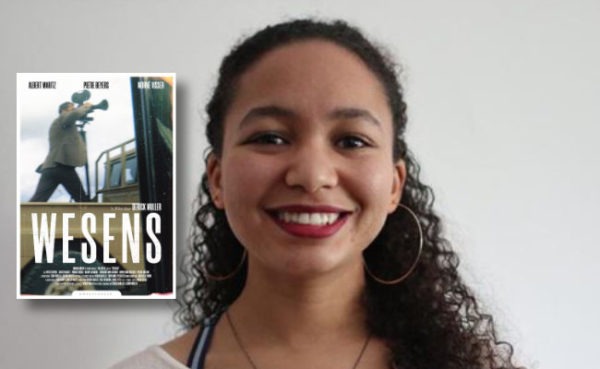 The scientists begin to look like the real aliens in this situation.

Wesens is an intriguing Afrikaans film that is creatively produced, both as entertainment and as sociopolitical commentary. It follows a group of scientists and security officials who travel to the Klein Karoo, where a farmer has witnessed a UFO landing on his property. The investigation is permeated by fear, fascination and ultimately brutality.

Viewed through the scientists’ camera lenses, with jerks in the reels, muted colours and a slightly grainy quality, Wesens takes its viewers back to 1967. From the first scene, the audience is treated to long shots of the arid landscape from the backseat of a vehicle with three men. We watch from the perspective of a fourth one, who is filming. The natural colour pallet of browns, greens and sky blue is beautiful and translates easily between perspectives behind the old cameras and the clearer view through the naked eye.

Wesens quickly defines its characters through Afrikaans dialogue: from the pensive and idealistic Kuyper to the conservative fundamentalist, Major. It is almost too on-the-nose, but the exchange feels authentic, and the quick characterisation leaves room for viewers to contemplate the rest of the action.

Themes and underlying motivations are smoothly introduced through dialogue, as well: a John F Kennedy quote, allusions to the striving and paranoia of the Cold War, a parallel drawn between the earth’s isolated population and the bushmen of southern Africa before colonisation. These all recur later in the movie.

One of the most convincing scenes is the farmer’s account of events when “the object” came to rest on his property. His transition from broken English to Afrikaans as he becomes more immersed in the memory feels real and palpable.

The acting in Wesens is solid and enjoyable to watch. One of the most convincing scenes is the farmer’s account of events when “the object” came to rest on his property. His transition from broken English to Afrikaans as he becomes more immersed in the memory feels real and palpable. The camera panning over to film the expressions of the sceptics listening to his tale provides a comic moment as well.

The lack of a continuous score makes the scenes which do have music and sound effects more impactful. On the way to the landing site, dialogue gives way to old-fashioned sci-fi sounds: the whirring of spacecraft and the howl of stars and planets. Played over footage of the vehicle travelling on the dirt road, the soundtrack transforms the Klein Karoo landscape into another planet and the car into a hovering metal craft. The scientists begin to look like the real aliens in this situation.

The skilful use of the soundtrack and camera angles gives a voice to the alien object, too. The large, stone-like mass has so much solo screen time that it could be considered another character. Low-angle shots frame it between the open sky and the blackened flowers and shrubbery. It appears natural rather than foreign. Shots of the object alternate with extreme close-ups of chemicals and elements separating in the scientist’s still. Chanting or droning voices allude to a time far back in human history, perhaps the earth’s very beginning with the shifting elements. Not only is the object alive, but it is ancient, and it belongs here.

During their investigation, the characters battle with worrying physical symptoms (possibly induced by radiation) and questions about what danger “the object” might pose. One has to leave the site; another experiences an inescapable draw to “the object”, reflective of his curiosity and desire for harmony with what it holds. A third grows increasingly suspicious and agitated, and the last is caught in the middle.

“The object” finally gives up its first secret, a living being, and paranoia culminates in shocking and unprovoked violence.

In the lull that follows the first climactic moment, the remaining characters discuss an idealised world in which the first people to call South Africa home lived simple, harmonious lives in nature. Their exchange happens in whispers, with figures silhouetted against a sky turning orange at sunset. It is supposed to be a magical moment, yet a flaw in the movie’s protagonist is also brought to focus in the dying light.

When those who are fascinated by first nations and their ways view them from an overly idealised perspective, indigenous people continue to remain “other” rather than being equally good or fallible people. The fact that all the characters in the film fail to verbally identify the people whom the object birthed with the word human is almost laughable, yet it is true to the reality that the film comments on.

The film and its creators demonstrate respect for all involved. Violence is not backed by a sensational soundtrack or a shot from a graphic angle.

The film and its creators demonstrate respect for all involved. Violence is not backed by a sensational soundtrack or a shot from a graphic angle. There are no close-ups of the wounds, which would have reduced the humanity of the dead. The film’s sole female character, who emerges naked, is filmed from low angles, cleverly using the plant life as a modesty screen. Even the audience is shown kindness. The characters allow viewers a chance to potentially see themselves taking a stand in a situation where their ancestors have already chosen for them, while at the same time leaving no room for questions about who was right and who was wrong.

However, the film’s final moments seem symbolically false. After the atrocities that the bushmen have faced, I do not think anyone can say with good conscience that the bushmen were seen, much less embraced, in their dying breaths. We have to let go of the lie that guilt or action after the fact means anything, and instead focus on taking action now, because South Africa’s first nation is not dead. Instead, they lie gravely wounded, trying to get up while bystanders shield their eyes and pre-emptively bemoan their passing.

Wesens manages to address a topic that many people grapple with or would rather ignore in favour of emotional self-preservation. In a climate where people increasingly look for excuses and exemptions from the effects of a racist and genocidal past, Wesens does not conjure up a grey area, because there is no grey area. Careful combinations of cinematic elements carry a weighty topic with an aesthetically pleasing backdrop – a masterfully executed film for fans of indie productions and for those who are undaunted by the truth.