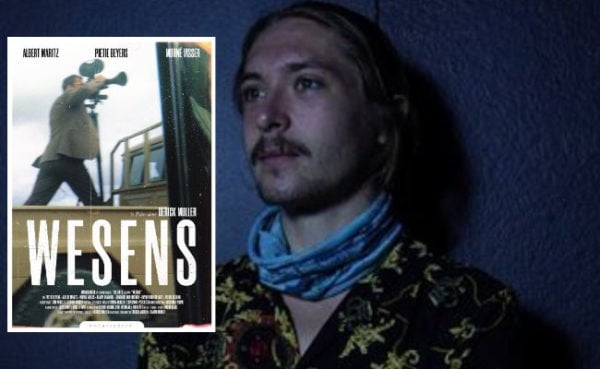 Wesens actually undermines its intellectual integrity through its marketing. It is an extremely well-constructed film; multiple viewings are required to truly appreciate every inclusion of visual and audio elements expertly interconnected with overarching themes.

After a first-time viewing of Wesens (2020), one can be forgiven for thinking that the whole experience was a bit of a let-down. Its titular title conjures mental images of flying saucers and their intergalactic occupants. The trailer even highlights generic sci-fi elements, pandering to popcorn gobblers who expect to receive thrills and chills. Ironically, the found footage style, consisting of Super 8 and 16 millimetre film, further alienates the aforementioned viewer into a false sense of security. Some of the targeted audience might be well aware of the tropes and conventions connected to the found footage genre, and therefore they could be disappointed by the overall art house aesthetic and rather subtle implementation of advertised elements.

Wesens actually undermines its intellectual integrity through its marketing. It is an extremely well-constructed film; multiple viewings are required to truly appreciate every inclusion of visual and audio elements expertly interconnected with overarching themes. Arguably, the latter kernel-orientated mindset will inevitably lead to a more surface level interpretation of the plot. Although it is evident that the plot is allegorical in nature, at a glance one might perceive it as being reminiscent of a new-age creation myth. The narrative shares aspects of ancient alien theory and real-world Khoisan mythology pertaining to astrological events and human existence as a whole. In order to discover the filmmakers’ intended meaning, we must deconstruct the narrative and delve deeper into the main characters’ individual motivations.

We start off following four South African Republican Intelligence Agents on their way to investigate an unidentified object which has crashed on a Karoo farmer’s land. Each of the leads has their own distinct credentials, namely Major Martinus Viljoen, Staff Sergeant Andries Brink, weapons engineer Pieter Kuyper Albertyn and junior chemical engineer Johan Conradie. They are supposedly specialists, thus having varying levels of authority over side characters and over one another. When this authority is put under narrative pressure, we are allowed a glimpse into their personal ideologies.

Major Martinus and weapons engineer Kuyper Albertyn immediately express polarising personas. Both are extremely opinionated; the opening car ride to the farm establishes their perspectives. Casual conversation leads to an outburst revealing the major’s personal beliefs. He is evidently ruled by his religious identity, literally becoming offended when Kuyper brings up the theory of evolution. The major perceives humans to be God’s chosen species, far superior to animals, referring to America’s mission to the moon as a sign of immense progress, almost godlike in nature. Therefore, one could argue that Martinus is the physical embodiment of historically colonialist beliefs, perceiving those who are less advanced to be less human. His overwhelmingly conservative outlook on life is contrasted by Kuyper’s more liberal beliefs. Both engineers inherently share sceptical mindsets, but Kuyper’s hint of arrogance and nihilism fades away during the second act, after a perspective-shifting experience.

The group does various scientific tests on the strange object. This entire process contains what appear to be innuendos of a psychedelic experience. A clue thereof would be the world of story, which is specifically set in 1967, the “summer of love” – a nickname arising from the United States after an increase in popularity of the hippie movement. This notion is further substantiated by Kuyper’s reaction after coming into physical contact with the mysterious object. He appears awestruck by this event, being able to describe only what sounds like a first-hand experience of death. Conradie also tests a substance which has sprayed onto the staff sergeant’s mask, and this moment of observation can most definitely be described as psychedelic, or at least mystical/spiritual, tonally. The accompanying Eastern instrumental, alongside cut-away shots of the landscape and close-ups of the colourful chemical reaction, all in all personifies an aesthetic similar to that of the hippie subculture. Furthermore, this interpretation also explains Kuyper and Conradie’s radicalisation from submissive sceptics in the first two acts, to active protestors by the third.

By this point in the narrative, around the start of the final act, the characters have discovered that the craft is not necessarily dangerous or radioactive, but still has an unusual effect on people and the nearby environment. The investigation has devolved into stressful and unfamiliar territory for Martinus. His personal beliefs are being challenged, and his superiority is starting to flounder with the remaining crew. Thus, when the first “being”, a male, unexpectedly collapses out of the craft, Martinus immediately overreacts in a defensive and violent manner. He draws his sidearm and fires off multiple rounds into the male. Kuyper retaliates, tackling Martinus, Conradie following his lead by incapacitating the major with a shovel. Here on out, the film takes a dramatic shift in pacing, but not without thematic intent. The two engineers are now in full control of the cinematic lens. Instead of feeling like a found footage thriller, the film becomes somewhat of a nature documentary, as the engineers decide to subtly observe the second being to exit the craft.

Unlike Martinus, they never intervene, watching at a distance, trying to learn as much as they can. They realise that the being is female and shares characteristics similar to the Khoisan people of South Africa. At some point, Kuyper refers to this indigenous group as possibly being the oldest culture on earth – a remark we shall refer to when motivating the possible symbolic interpretation for the beings’ narrative existence. In fact, these final moments of the plot are difficult to consume through a literal lens, due to it being immensely demoralising to see Martinus get his way. Unbeknown to Kuyper and Conradie, he has awoken and recovered a rifle. He tracks them down and ignorantly fires a final shot at the female being. Kuyper and Conradie rush to the dying female’s side, just in time to learn her name, Kaang.

In real-world San mythology, her name refers to the invisible spirit within nature. With this information and the aforementioned link to our human history, we can suggest that the beings are representative of humans’ spiritual connection to nature. Before being shot, Kaang was holding a praying mantis, which is a symbol for stillness and meditation to various cultures around the world. Thus, if Martinus’s general personality hasn’t already vilified him in the audience’s mind, the ending definitely should.

It is a surprisingly beautiful message derived from brutally honest and ever-relevant commentary on human society as a whole.

The filmmakers were evidently positioning conservative beliefs as the antagonistic force, critiquing their oppressive nature – whereas an open-minded perspective, like that of Kuyper and Conradie, will lead to the discovery of universal truth and understanding. It is a surprisingly beautiful message derived from brutally honest and ever-relevant commentary on human society as a whole. In conclusion, Wesens is absolutely drenched in metaphor, too much to dig through in this particular analysis. The film might try and fool the unsuspecting viewer, playing with contemporary expectations, but it almost immediately drops the act and openly asks its audience to contradict their preconceived notions. Much like the titular engineers, one must view the film with an open-minded perspective in order to discover its true meaning.