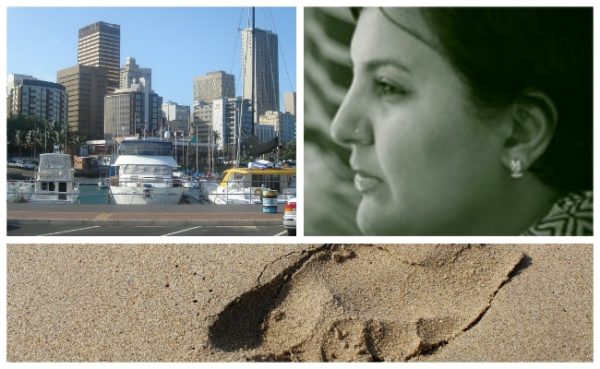 There have been sufficient tragedies in this world in the last two years, enough for most of us to know the drill. We locate our documents and put them into Ziploc bags, look yet again at the sleeping children, mask up, ignore WhatsApp forwards, and then there’s the one thing. We call our parents. Somehow, there is absolutely nothing we can do, being far away from them in things worse than kilometres, but we call them anyway.

I’ve stopped marking myself “safe” on Facebook, because no one really cares anymore.

I’ve stopped marking myself “safe” on Facebook, because no one really cares anymore.

But I do call my parents. My father answers the phone, which is uncharacteristic. He can’t hear the phone. Maybe he sensed me. Maybe he actually wore his hearing aid.

The line is scratchy, and we barely speak before he unceremoniously shoves the phone at my mum.

What we talk about immediately is looting, groceries and medication. Durban, the city where I live, is in the throes of violence and looting such as never seen before in South African history.

The fact is that almost all my childhood friends and both my siblings face our true north in this time, and it is a primal unification in anarchist times. We all hear one call. Tongaat is burning.

Our hometown – the village of the first Indian indentured labourers – and the first East India Company sugar mill are literally on fire.

Our hometown – the village of the first Indian indentured labourers – and the first East India Company sugar mill are literally on fire.

Widespread looting and carnage have been going on for 24 hours now. The streets where I grew up are boiling pots of tension. The cinema where I first held a boy’s hand is razed to the ground. The library where I hid behind shelves and read Beatrix Potter is probably ashes. The old railway station, the little shop we called Milky Bar, where we spent a month’s worth of allowance on Fanta and sherbet sweets, are gone.

And then, I see on some random Facebook feed that the old vegetable market is threatened and being burned by thugs – for no apparent reason.

And suddenly, I am filled with rage. Who cares about the cinema, the photo studio and the shopping mall with one floor in this small town in northern KwaZulu-Natal?

I’ve moved to the burbs. Farming towns are a distant memory filled with times we will never retrieve. These farming towns germinated people of every race into adults who have either moved to New Zealand or stood together like brothers. And now, old school friends send me pictures of all that history up in flames.

Here’s a little history. A few weeks ago, the ex-president of South Africa, Jacob Zuma, was arrested for a myriad of sins, but on public record he is arrested merely for flouting the Constitution and not pitching up in court. He bayed for his day in court, following charges of state capture and corruption, but when he was asked to stand centre-stage, he didn’t bother to turn up. In what was a proud constitutional moment and a movie-style montage, it seems he handed himself over on one dark and stormy night of ambulances, barricading fans and speeding SUVs.

But I imagine he was rubbing his hands in glee like a Bond villain sans the babe in his arm. He’s had many babes in arms. This tension and these riots don’t smell of one race against another. They’re too well organised and diabolical.

While all this may elicit arms akimbo and eye-roll emojis – a corrupt African leader seems par for the course in any rhetoric – it gets meaty. Talks of a third force and a red beret wearer who is also a Breitling aficionado, started as little whispers on the wind. Was there a third force, or was it Zuma’s supporters getting hellcat angry? At this point, who cares? It’s all dust now, anyway.

And then, all hell broke loose. In my city, Durban, a block away from my picket fence house filled with two kids, two cats and a pumpkin patch, thousands of looters began their tango, stealing televisions and toilet paper and burning everything in their wake. I stayed up that night, gorging on toast and TV news. Little did I know bread would be scarce the very next morning.

And then, all hell broke loose. In my city, Durban, a block away from my picket fence house filled with two kids, two cats and a pumpkin patch, thousands of looters began their tango, stealing televisions and toilet paper and burning everything in their wake. I stayed up that night, gorging on toast and TV news. Little did I know bread would be scarce the very next morning.

They looted and burned everything. Footage shows happy gangs of girls stealing trolleys full of perfume and bags of rice. One young guy pulled his mask onto his face (it was a global pandemic, after all, but who remembered a virus now?). He proudly told the cameraman that he was expecting a baby, and that the exercise bike he had just stolen and was wheeling down the highway was so that his partner could get in shape afterwards. He said he had never felt as free as that one moment when he stole from the capitalist giant.

I watched everything with a detached eye. South Africa has seen some ragged days. I saw looting and stockpiling when Nelson Mandela was released in 1994. We all feared civil war then. This phrase of “What will happen to us Indians?” became a sort of anthem back then. Ah, the South African Indian – a fearful bit of butter in the sandwich. And the bread analogies don’t stop here.

We have always felt slightly blurred out of history. Always on the back foot, not knowing who would write our names down in the books. We knew clearly that we were not Indian; generations had put paid to any subcontinental hankerings. But suddenly, we felt very, very un-African. That was then. Now, we stood with good people and protected what little we had left.

What Indian-origin people did was to eventually cement our space in a multicultural South Africa as best we could. Let’s just say that we learned that silk sarees and African print blouses do look extremely sexy.

And now. Tonight. As they burn townships and areas that are considered Indian areas, the racial underpinnings of this spate of violence and carnage in Durban need to be ignored. It is thuggery. Not racism. Just thuggery. Let’s leave it at that. Social media is a demon. Voice notes and Facebook comments of hatred between black African and South African Indians spiral out of control. It’s not that these looters or unsavoury elements have only targeted areas that South African Indians are living and working in. It is simply that for years we have lived so close to each other, that these areas have melded. What was once a melting pot has created a stew. Proximity. That’s the word I’m looking for. Looters are making a thoroughfare of an area well known as one of the largest Indian townships to get to their own townships with trolleys and heisters of stolen goods.

And as I write this, I know I am simplifying a complex thing. Maybe I’m just looking to explain why the areas closest to my heart are under literal fire.

And as I write this, I know I am simplifying a complex thing. Maybe I’m just looking to explain why the areas closest to my heart are under literal fire. Maybe my tunnel vision doesn’t allow me to see, perhaps, a white woman in her home staring out in fear at burning buildings and throngs of screaming masses. When I stood in line at a local mosque to get a loaf of bread, I spoke to the many white people standing with me. They agreed. We have burned history. And, tragic as it may be, something brand new will rise from the ashes. This grand, new thing is the brand new South African. The resilient one. The fraternal one. The colour-blind one. Maybe.

I know nothing at this point. I know fear and exhaustion. The strides this country has taken seem now to be ground to dust. If I were to become circumspect and Kafka-esque about all of this, I’d ask, if South African Indians are the butter in the sandwich, what colour is the bread? Is there even a sandwich?

What there is, is my mother on the end of a crackling line grumbling that my father is forgetting everything, and me asking him any questions as research will go nowhere. Does he know which part of the old morning market his father handcrafted? I ask. No, he doesn’t recall. Does he remember the fresco at the entrance to the market that his father carved by hand? No, he doesn’t remember.

What year was it that his father stopped cutting sugar cane as an indentured labourer and actually took the job to build the Tongaat market? Ask him. Does he remember?

No, he remembers nothing. And I think, now, more than ever, it’s better that he doesn’t.

The heart of Howick

Where was the thin blue line?

Seen elsewhere: Goodwill and compassion are stronger than the forces of destruction

Nothing left to loot in Soweto