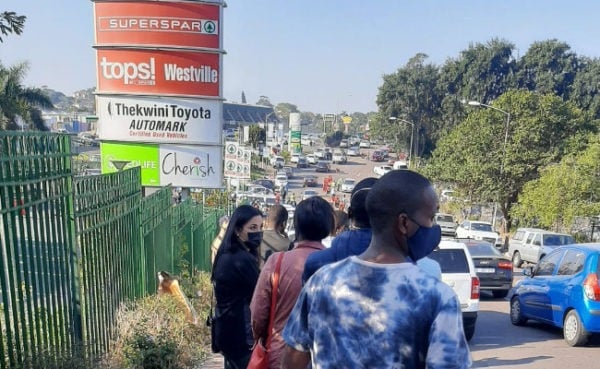 Yesterday afternoon, after four hours of Zoom meetings, I was told the queue was finally shorter at the local Spar. I’d tried four times before, without any hope of reaching the shops as queues were kilometres long. I rushed there at about 3:15 and found the queue reasonable and actually found a place to park in the road.

There were people of all races, ages, and creeds waiting peacefully, while members of the church across the road offered water in polystyrene cups. They also offered their facilities across the road if anyone needed the loo.

Volunteers, again of all ages and races, guiding people as the queue reached the parking lot and eventually the shop. Women sprayed the baskets with sanitizer before handing them to you individually. Even my neighbour was there, helping those whose bags were too heavy.

I spoke to the volunteers who said they would do anything to help and save their communities.

I teared up so many times, humbled by how many good people there are in the country and how these outweigh those who would destroy it.

The men and women standing guard at barricades to prevent looters entering their homes have slept very little these past nights and they are doing it for the greater good of their communities. This is what we must hold on to. Goodwill and compassion are stronger than the forces of destruction, whatever the agenda of the agitators is.