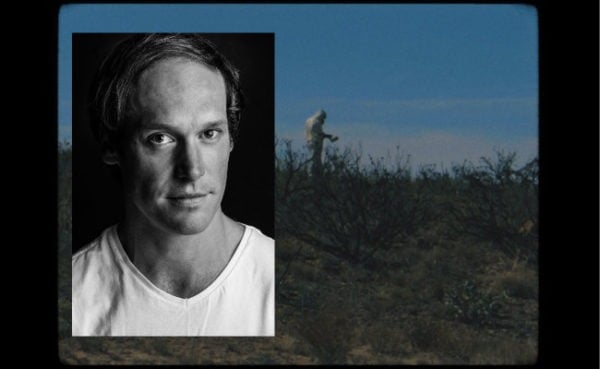 His statement, and that of Kuyper, debunks the Eurocentric view held for centuries that colonisation introduced aesthetics to Africa as a medium of expression and that the “savages” needed Shakespeare and bedtime Bible stories to be civilised.

At its core, Wesens begs the question: who was here first? This is arguably the most contentious issue in South Africa today, and there are no signs that it will ever be resolved. In the opening scene, Kuyper scratches the itch of apartheid ideology: “Sommige gaan so ver as om te sê dat ons afstammellinge van hulle is.” Major Viljoen snubs him in true Doubting Thomas style – a character trait sustained throughout the film. This stand-off in the car is key to understanding the narrative. For now, let’s turn the clock back 70 000 years to a coastal region about 250 kilometres from where the extra-terrestrial “thing” has disturbed Sakkie’s night cap. Blombos Cave, in the Stilbaai district, is – among other firsts – famous for a piece of ochre adorned with hashtag-like engravings. It is purported to be the oldest known work of art ever discovered. Four hundred kilometres further along the southern coast, you will find the Klasies River Mouth Caves. In the early 1960s, Professor HJ Deacon, associated with the University of Stellenbosch, and a team of archaeologists found evidence dating back to 120 000 years ago that this dwelling might well be the cradle of Homo sapiens – the first omnivorous bipedallers not to feel the need to dine on, say, a cousin with whom he/she may have had a quarrel earlier that day. Kuyper’s subsequent statement that “hulle is die mense wat Noorde toe getrek het en so die hele wêreld bevolk het” is in line with the “out of Africa” theory that the migration originated from this coastal region. At one point during the film, Conradie pans his camera over the surrounding hills and remarks that the view “lyk soos ’n kunswerk”. His statement, and that of Kuyper, debunks the Eurocentric view held for centuries that colonisation introduced aesthetics to Africa as a medium of expression and that the “savages” needed Shakespeare and bedtime Bible stories to be civilised. A friend of mine recently stated: “We [white South Africans] are orphans from Europe, adopted by Africa.” It requires a bit of cerebral contortion to understand this statement in the context of the final shot, when Kuyper cradles the dying Kaang (Randy Januarie). It seems to verbalise the following: we stem from the same area. The skin complexion of those who left turned pale, and they developed different ways to communicate. On “our” return, “we” decided the rules below the crumbling tower of Babel, while “we” are the instigators for the resulting domestic violence.

Right from the outset, the crew is concerned that the strange visitor may be the work of the Russians. The “Rooi Gevaar” and its obsession to crack the whip on traffic regulations in orbit, launched a couple of spacecraft from 1957 to 1965. Is this the shrapnel of their ideology that has made its way to us? While the National Party spent millions on extra park benches to ensure separate seating arrangements, other First Worldies were both swearing at and worshipping Newton and Einstein. Perhaps this is a further indication in the context of the film – as was the case with flat-earthers and anti-Darwinism during the apartheid reign – that everything out of the norm is to be blamed on another – “the other”.

While the National Party spent millions on extra park benches to ensure separate seating arrangements, other First Worldies were both swearing at and worshipping Newton and Einstein.

So, what happens next in the story? The initial diagnosis of the “thing” is that it contains high levels of radioactivity. The car’s alarm goes off, and crew members spew their breakfast on the barren land. Conradie sets up a field laboratory, tests samples and finds that the matter is consistent with the elements needed for something to be classified as being “alive”. Yet, one element is unidentifiable. It invites the viewer to try and remember what goes where on the periodic table. Top right, centre, bottom left? This is a nauseating experience for the average teenager. Factions start forming when a slimy being seeps from the “thing”, which now becomes a womb of some sort. Major Viljoen shoots the firstborn “son”. Conradie knocks him unconscious with a shovel, and he is dragged off to the car. Soon, a second being flops onto the semi-desert earth – this time around, it is female. She turns the scientists’ attention away from hard science to mesmerism with the actual enquiry of their expertise.

Speaking of nausea. The “found reel” genre originated with arguably the most gruesome movie of all time, Cannibal holocaust (1980). I had the displeasure of recently watching the unedited, grainy version in a quest to contextualise Wesens within this genre. Cannibal is exemplary of a clever director with a dirty mind. Lost film reels are found in the Amazon jungle, of four Americans who disappeared while shooting a documentary on native tribes. Gang rapes, ritualistic decapitations and animal cruelty splatter blood on the screen for well over an hour. The director was arrested on charges of murder prior to discovery that the “butchered” actors were alive and well. Apart from the explicit gore, the lead character, Professor Harold Monroe, says near the end of the film: “I wonder who the real cannibals are?”

Both films “send” a Westernised crew, camera in hand, to explore the frontiers – the one bashing through a rain forest, and the other through an institutionalised barrier with a clear sign stating: “There be dragons” (aka communists/boesmans/things you shouldn’t know about).

Voyeurism in the context of cultural appropriation is a minefield, yet offers a tantalising immunity for the viewer from being culpable of exploitation. It is a case of: “Hey, man. I am just watching the movie. It is the director that did it.”

South Africa is divided, has been and probably will always be. But, as Kaang and Kuyper witness each other’s departure to wherever, the penny drops.

Intertextual references to imagery, intended or not, are worth mentioning. At the outset, Kuyper is mysteriously drawn to the beauty “within” of the object on Sakkie’s farm. He enters a stationary trance, touches the surface – at that stage, the crew is still under the impression that it is radioactive – and is plucked back to reality, man-handled to the ground next to the car. His one leg is propped up, the other awkwardly angled in the opposite direction. Who can ever forget the image of the killing of three wounded AWB members at point-blank range in front of journalists by a Bophuthatswana police constable, Ontlametse Bernstein Menyatsoe? Right after Conradie stabs Major Viljoen for attempting to set the “womb” alight, he consoles himself with Kuyper filming the beautiful Kaang next to a dam. A ray of light flares on the screen; the two men extend their hands to each other. Kuyper assures his assistant that the stabbing is not his fault, but was rather a necessary reaction to circumstances beyond his control. Anton van Wouw’s sculpture Slegte nuus, depicting two Boere krygers succumbing under the pressure of fighting British invasion, is a statuette blueprint of the penultimate scene. Major Viljoen gathers his strength after the stabbing and shoots Kaang. Kuyper rushes to the dying nymph. She can hardly breathe; he is close to tears. “The other” meets “the other” face to face. She dies. He dies, too, but in a nonfatal manner. Raka is incarnated in a female version. Van Wyk Louw sits upright. Someone has seen the light.

South Africa is divided, has been and probably will always be. But, as Kaang and Kuyper witness each other’s departure to wherever, the penny drops.

Proximity, no matter how uncomfortable, is perhaps South Africa’s only remedy.

“Leave your Hollywood notions at the door”: Mphanya Mmatseleng on Wesens