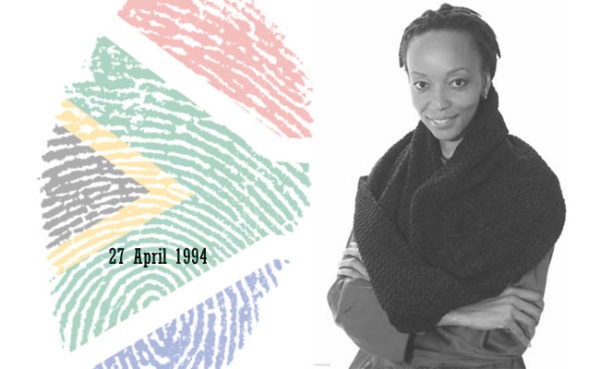 It has been 25 years since the first democratic elections in South Africa. With the 2019 elections around the corner, Karabo Kgoleng shares her memories from 27 April 1994.

Although I was only 13 years old, the importance of South Africa’s first democratic election was definitely not lost on me. The reason we lived in Botswana, and not at home in South Africa, had everything to do with that moment.

From 11 February 1990, when Mandela was released from prison, every day was a build-up to 27 April 1994. My father was almost 61 years old, and my mother was 44. My piano teacher was also a South African refugee, and so was one other clergy member whose kids attended school with us, as well as two medical doctors and their families, and a few teachers. There were also South Africans who had married Batswana.

“Were white people going to be nice to us and stop calling us the ‘k’ word, and referring to mom as ‘girl’ and dad as ‘boy’? Would I be able to play with different kids, the way I could in Botswana? Would we move to Johannesburg?”

These were just people whom I recall who were known to my parents. This meant that the situation in South Africa was a painful daily reality that we couldn’t hide from each other. It made my sister and me, and other South African kids, stand out at school. It caused resentment among our host community, especially after the bombings in Gaborone in 1988 – when were these people (us) going to go? It caused confusion among the children – it was one thing to know what you were going to be when you grew up, but where were you going to be it? Were we ever going to go back home?

Then, finally, possibility shone brightly on that crisp autumn morning in 1994. It was school holidays, so we were at home. The house was awfully quiet. Usually, parent-related thoughts of home were accompanied by the music of Miriam Makeba and Hugh Masekela; the sight of my father reading Steve Biko, Can Themba, Trevor Huddleston and Nat Nakasa; my mom’s recollections of Miss Kuz-Kay, otherwise known as Ellen Kuzwayo, who used to take them to the sea as part of her social work with the youth of Soweto and the West Rand.

When my parents caught South African feelings, they would invite other South Africans over, and the drinks would flow, and so would the Afrikaans. (Please, don’t let anyone fool you: the older South African exile generation revelled and rebelled in Afrikaans. Afrikaans lost its liberation cachet after 1976, when the Nats opted to weaponise it.) That morning was different.

There was hope, but, more than anything, there was anxiety. The apartheid government was brutal. The “boers” were not going to give up just like that! What about Inkatha and the ANC? Had they really stopped fighting? Were white people going to be nice to us and stop calling us the “k” word, and referring to mom as “girl” and dad as “boy”? Would I be able to play with different kids, the way I could in Botswana? Would we move to Johannesburg?

Would I have to learn Zulu (yes, it was and still is a thing)? If my parents and all other South African parents could vote away apartheid, then we would be able to live in those suburbs, and go to schools where they wore blazers with trims, and shop at indoor malls, and visit the TV studios, and meet Bonnie Mbuli and Candice Hillebrand!

Whenever I engage with other South Africans of my cohort – some of whom remained in South Africa after returning with their families, and others who decided to make a home elsewhere for a variety of reasons – I always wonder to what extent they are socially committed to building this country. This is because we are not all our parents’ children, and we were not all raised the same way – something which applies across all families, not just those of “exile babies”.

Social responsibility was a big deal to my father, but not so much to my mother. I am my father’s daughter, so I became a bit noisy, but not for a living. However, with my fires having been tempered by time and events, I’ve come not just to accept but also to embrace that having come from a family that was tangled up in politics, does not oblige one to take up a life in politics or related areas.

I have friends who were raised in exile, who vary from activists to civil servants, to geeks who care more for gadgets than people. Politics was not really a choice for my parents. They were caught up in it. That’s why nobody worked for the government when we returned to South Africa in the late 1990s; but, voting is not something that we consider as an option – we have to vote, and each person’s vote is a secret. I hope that even the most cynical of my lot votes.

In 1994, my parents discussed whom to vote for, as they were not aligned with any political party, because we were hosted in Botswana by the Anglican Diocese of Central Africa, where my dad served as a priest. They were cautiously excited that they would finally have a say in the destiny of South Africa. I can’t assume whom they voted for, but everyone had fallen hard for Mandela after he had managed Chris Hani’s death the previous year, as well as all the township and hostel massacres.

Mandela and company’s leadership brought the country back from the precipice of war. When they returned from the embassy with inky thumbnails, my parents had their afternoon drink. It was probably gin and tonic. My dad bought a copy of The Star newspaper, and it had that iconic picture. We finally had a country – as soon as my parents could find work.

In 1997, I finally got my South African ID. Yes, I had the passport, but now I belonged. I had a future here, and had started at a new school. Yet, I didn’t feel like I belonged. The Kosh region (mining towns of Klerksdorp, Orkney, Stilfontein and Hartbeesfontein in the North West province) was very racist. The people spoke terrible English – not like Candice Hillebrand or Bonnie Mbuli and their Setswana was different. Okay, I was different.

The only place I wasn’t scared of going to at night was the gay bar, because in the other bars, the white guys liked beating up black people. It was the same in the park. One afternoon, I went for a run, and these white guys beat up a random black man who was just walking home. The mining towns in the North West province were not my idea of the new South Africa. I had culture shock; I missed my old school and was on antidepressants. I decided to pace myself, and once I finished matric, I would leave and never look back. However, I have not been back to Botswana since 1999, and my parents moved to Johannesburg the following year.

I voted in Stilfontein in 1999. I knew what I was not voting for. The racism had done its psychological damage. I was popping pills and trying to get my head around how much pain such an arbitrary thing could cause. In exile, it was an idea. Back home, racism was everywhere, and it was so clever that, often when you pointed it out, you’d be met with gaslighting. Apartheid was no longer the law; we now had a brilliant Constitution.

And the boys and men thinking they were superior? No, sir. We were dealing with that, too. I felt lucky to be a black woman in possession of a South African identity. I could move freely (criminals notwithstanding), study whatever I wanted, love whomever I wanted, live wherever – you get the gist. I knew whom to vote for. The ones who wrote the Constitution. Mandela’s family. OR Tambo’s family. Robert Sobukwe’s origins. The ANC proved that you could negotiate with your oppressor. Right? Right? I voted in the elections; I voted for the SRC, but, at university, the reality that the new South Africa was fragile was rapidly sinking in.

By 2004, I didn’t know whom to vote for, and that has remained my electoral state since then. I do vote, but I never know whom to vote for until my pen is hovering above those ballot papers. Who gets my national? Who gets my provincial? Do I play red against his dad, or against the blue? Oh, no, I would never give the blue my vote. Maybe dagga? Who is saying the most useful thing about migration and climate change? What does their manifesto say about books?

2019 may or may not be the most historic election since 1994. May or may not, because South Africa tends to do things in historic ways, for good or bad. First Soccer World Cup in Africa? IPL cricket organised in no time? Recall a couple of presidents? Couple of Oscars and fistfuls of Grammys? Sure! Get a kid to read and write with comprehension by the age of 12? Arrest, charge and convict corrupt people? Let’s be patient. If we keep voting the same way, then this won’t be a historic election.

But, young South Africans don’t share my memories; they are angry, and can’t envisage a future that includes them if they keep waiting, so they might vote differently. The young vote may just make 2019 the most historic election. I think the older voter is held captive by a combination of memory, apathy and fear. Come 8 May 2019, this slightly older voter will go and have her pen hover above the ballot, with hopefully more than an “eeny, meeny, miny, mo” to guide her decision, because it actually is a really big deal.