It has been 25 years since the first democratic elections in South Africa. With the 2019 elections around the corner, Christi van der Westhuizen shares her memories from 27 April 1994. 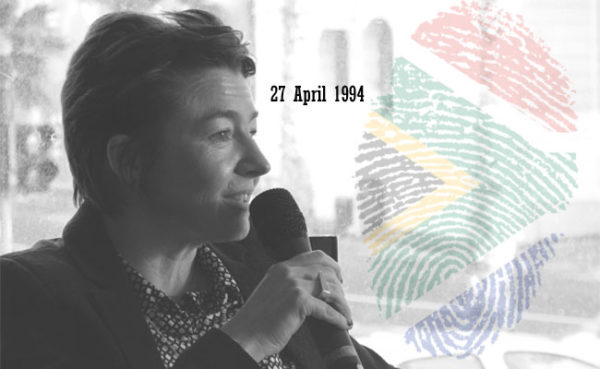 26 April 1994. We were sitting in a dingy restaurant in Rockey Street in Yeoville, Johannesburg, trying to predict how the next day would go. Would this next push to crack South Africa out of 342 years of colonialism and drag the country into democracy, work? Or, would it all end in calamity?

I had been involved at a limited level in student politics, as one of the founding members of an organisation aligned with the National Union of South African Students (Nusas). We couldn’t organise as Nusas, as it was banned at the then Rand Afrikaans University. The youth wings of the National and Conservative Parties were freely active, however.

“In contrast to these dehistoricising fantasies of political purity, the reality is that the first democratic election almost did not happen – a few times.”

We would distribute pamphlets calling for Nelson Mandela’s release, only to have them ripped up and thrown back in our faces. I was ordered by the dean of students to cease my political writing or be expelled, after I had made the links between Nazism and HF Verwoerd’s thinking in the student newspaper. While I was working as an assistant at Vrye Weekblad at the time, colleagues were targeted by the apartheid security police.

It was, therefore, with a mix of trepidation, anticipation and exhilaration that we as politicised young people pondered the options that night before the 27th. Energetically, it was another country. Today, we hear that Mandela was a sell-out, that reconciliation was a bankrupt idea, that Desmond Tutu’s rainbow nation was a mirage conjured up to appease whites. Today, we hear that we should have had a “real” revolution, that this land needs to be cleansed of its past, and that the only way to achieve that is with blood in the streets. As though we did not have blood in the streets.

In contrast to these dehistoricising fantasies of political purity, the reality is that the first democratic election almost did not happen – a few times. The National Party, in control of a brutal state machinery, was playing a double game, using counterrevolutionary methods cribbed from French “lessons” from the Algerian colonial war.

The Boipatong and Bisho massacres. The assassination of Chris Hani. Ongoing covert operations by police hit squads, the assassins of the Orwellian-named Civil Cooperation Bureau, vigilante groups and militarily trained Inkatha impis. The white far-right ganging up with Bantustan leaders, leading to the AWB’s bloody “invasion” of Bophuthatswana. Inkatha’s last-ditch attempt at derailing the elections. The low-level civil war that continued in KwaZulu-Natal after the election could have been a raging national civil war against a white military dictatorship.

At one point, even our tiny student organisation was apparently infiltrated by a government spy. Years later, I was told by someone at a Melville bar (pinch of salt, I know) that the security police had files on us. Those were times of extreme uncertainty, with death lurking everywhere, being unleashed in a sudden bloody event, such as the St James Church massacre.

At the same time, the edifice had fractured, creating the first real opening for democracy. Suddenly, there was hope. Our small coterie of Afrikaner and black radicals enjoyed the elation of being at Mandela’s first rally in Soweto in February 1990, a few days after his release. It was a relief to be able to write against all that was repressive, to spur on (in however minor a way) something new that could be inclusive and just.

On 27 April 1994, I stood in a queue in Melville to vote. The feeling was one of the ordinary within the extraordinary: people doing something so obvious that was so monumental at the same time. After my stultifying childhood, lorded over by adults at home, school and church, that day for me ushered in an electric sense of potential.

Christi van der Westhuizen is associate professor at the Centre for the Advancement of Non-Racialism and Democracy (CANRAD), Nelson Mandela University.