On the 19th of March, a Breyten Seminar was held at Unisa's Department of Afrikaans and Theory of Literature. Hein shares his presentation at the event with LitNet.

“in the calyx of your thoughts”: topological deformation in a few texts and paintings by Breyten Breytenbach: Hein Viljoen

This is no 11 from the series of poems titled “kwartels in die loekwartboom” (“quails in the loquat tree”) from Breytenbach’s collection Die na-dood (The after-death) (2016). For each poem, he has provided his own English translation (which sometimes illuminates the Afrikaans).

This is an example of what I call the eighth petal of the sacred lotus in Breytenbach’s work. It indicates the ways in which Breytenbach plays with and stretches language and cognitive frameworks. That is why he cites Karl Marx at the beginning of Kouevuur (Cold fire / Gangrene) (Breytenbach 1969): “In history, as in nature, decay is the laboratory of all life.”

2. The eighth petal of the holy lotus: topological deformation

To understand what topology is, imagine that this sheet of paper is made of rubber. You can then stretch it into different shapes, maybe an ellipse or a circle; you can roll it into a cylinder and stretch it longer, into a bottle shape, and let the neck of the bottle bend back into itself. The resulting shape is called a Klein bottle.

(See https://plus.maths.org/content/os/issue26/features/mathart/Build for an animation of a Klein bottle.)

A Klein bottle is a remarkable shape, for it has only one surface “like the well-known Möbius band – but is even more fascinating, since it is closed and has no border and neither an enclosed interior nor exterior” (Polthier 2003).

More formally, topology can be defined as:

the mathematical discipline which investigates those properties of shapes which do not change under continuous bending and stretching. (Polthier 2003)

There is an in-joke among mathematicians:

Q: What is a topologist? A: Someone who cannot distinguish between a doughnut and a coffee cup. (Weisstein 2005)

In other words, topological deformation entails that a certain space or shape is stretched or folded back onto itself, even a few times, and that the boundaries between spaces become fluid or permeable. In literary terms, this would entail the stretching of one frame of understanding or reference into or onto another, mapping two or several cognitive frameworks onto each other.

A poem in which the topological deformations literally boggle the mind is “Windblom”, a key poem from the collection Papierblom (Paper flower / Bougainvillea) (Afrika 1998, 60).

The title already destabilizes our conceptions of the concrete and the abstract. A flower of wind, windflower, flower made of wind, seems to be a concrete thing, but that is an illusion – “’n fluistering van dooie ore”, “a whispering of dead ears”, that can neither produce nor hear sound.

The topological deformations are rather hard to follow. Holding a hibiscus in the calyx of your thoughts already turns your thoughts onto a flower. Then, you imagine yourself sitting on the edge of that calyx, which also is the edge of a land of evenings – a dark country, a country without prospects? Or, maybe, you are sitting literally on the edge of the land – on the beach, in other words, as stanza 2 suggests. “Whisper” and “mumble” are key words for the collection, suggesting a kind of primordial communication, before proper words were formed. The poem is from the section “mompels en ander mondmusiek” (“mumblings and other mouth music”), which suggests that the poem is music made with the mouth, not written; music of the ego that fancies itself present to itself: in other words, the voice.

In the meantime, the things around the speaker are deforming into scribbling, written things. The cricket’s sound is the wind “curdled into sound”: a double concrete-making of the wind – first as sound, and then as clotted or curdled matter. In the end, the wind remains the only constant presence, but mixed with metaphors of writing: paper flower (or leaf), comma, (full) stop. The wind persists, in other words, as words on paper.

4. (Transformative) space as a link between Breytenbach’s poetry and paintings

The deformation of spaces, like in “windblom”, and the transformation of space in general, is one of the links between Breytenbach’s poems and paintings. One explicit formulation of such a link one finds in his reflection on space (“’n Besinning oor ruimte …”) in (Katalekte, 2012, 155–8). Describing the transformative or deformative power of poetry and of painting, Breyten writes the following: “The poem (or canvas) [can be regarded as] transition and as mediating space where language can manifest itself as agent of transformation. You work at and on and ín the canvas until you begin to see something.”[i] The presence of other elements within this space causes mutations, the unlocking of alternatives, he writes further on, though, of course, the poem-space as womb is the tomb where words can still mumble and gesture to each other in order to reach an understanding.[ii] That is why he regards a poem as a living-space for language, or as the womb of language. He also thinks the dialectics between word and space is timeless (just like movement on the canvas).

The idea of topological deformation provides a way of reading Breytenbach’s paintings as well, and, as an example, I want to look at Gongshi 6: 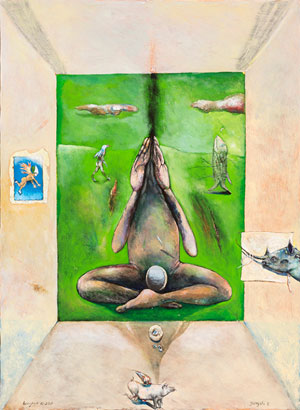 In this painting, one can distinguish at least three different spaces or planes.

Below, a triangular, darker shadow echoes the shape of the central triangular figure, but in reverse. On it, a bigger eye and two smaller eyes are pasted, but the whole looks a bit like a vagina. The triangle points down towards a pig with wings which is trampling a little human figure. A flying pig is an index of unreality. At the top, the tear in the green field seems to run into the frame itself. On the right-hand side, a small drawing of an animal is pasted on (though, on the right, it also forms part of the frame). It looks like a horse, a dog or a hyena and has a thin horn, like a rhinoceros’s, that projects onto the green plane. The horn throws a thin shadow onto the drawing, and on the horn and its shadow a piece of string shaped into a circle hangs.

The man-bird and the man-fish are moving horizontally towards the seam, but with their heads above the horizon line (or water line); they are also striving upward, echoing the central figure. In contrast, the fleshlike clouds are moving from left to right, emphasizing horizontal movement. The cut-out window with a flying clown in it stretches the meaning of the frame: it turns the box or the self-reflecting frame of the painting into a window to a totally different world. Below, the pig is trampling the ideal of flying underfoot, but paradoxically is sprouting wings at the same time.

From this, we can make sense in a first frame of reference (or cognitive frame), namely the frame of Zen-Buddhism and zazen meditation. The figure is meditating and, by means of his meditation, he is able, as it were, to tear open the curtain of the world of appearances and pass into the real world beyond. The bird-man and the fish-man are emblems supporting his vertical movement into the transcendent. But the pig below seems to be delivering sceptical commentary on the whole affair.

A second frame of reference is suggested by the title: a gongshi is a Chinese scholar or philosophical stone, and it looks as if the figure is drawing energy from that, as if the stone gives him the power to tear open the green field of the everyday and pass into the transcendent world. The stone drives the meditation, as it were.

The arms are strangely disembodied from the main figure, as if they belong to someone or something else which is, as it were, parting the curtain for the central figure to fall through into the everyday world, pulled down by the weight of the stone. This is a moment of topological reversal or deformation: up turns into down. This makes sense in a third cognitive frame, namely falling out of a cleft or vagina: the frame of birth. The vaguely vagina-like images seem to support this – or, the fact that the bottom part of the frame resembles a woman’s thighs. We can also think of the Afrikaans word doos (“box”), which also means “vagina”. In any case, this instantiates Breytenbach’s view that the creative space is a kind of womb.[iii]

The horse-dog-rhinoceros is a jarring element in the whole. Is it challengingly down-to-earth, in contrast with the transcendent strivings of the other figures? Or, is it presenting a magical piece of string, or a ring of string, to the central figure? What is the purpose of the string?

Perhaps an answer lies in the series of diagonally downwards-pointing lines or things in the painting: the tip of the bird-man’s wing, the fish’s fin or leg – and, if one looks carefully, there is also a pen and other diagonal things pointing out of the central figure’s stomach. The end of the string that the dog-rhinoceros holds, echoes the other diagonal things in form, direction and colour, as do the flying clown’s arms, his wings or flames, and the pig’s wings. The protuberances of the bird-man and the fish-man are clearly phallic, as is the dog-rhinoceros’s horn, probably. But the figure has no phallus – only a pen. In other words, the power of the phallus-pen has been superseded/replaced by the scholar’s stone. The figure has balls – or at least one. A fourth cognitive frame is evoked here: gender, the phallus, phallocentrism, perhaps to be replaced by a stone – and does that evoke earth – Gaia – echoing the shape of the globe, like scholar stones do?

A fifth frame, the frame of human/animal, is also at stake here: the central figure develops lobster-like arms. The painting is situated at the cusp of its becoming-animal, like the other figures are becoming-human.

And, of course, the title of this exhibition, The 81 ways of letting go a late self, activates a sixth cognitive frame: it forces a change of perspective which entails that the figure represents a late self who is helped, or letting go of, into the dark fissure of death. The jointed arms belong to another self, who is doing the helping, parting the flaps of oblivion. And the scholar stone is supplying energy for the process.

Though they are contradictory, it is impossible to decide on only one cognitive frame for understanding the painting. This is again true to Zen, which regards up and down, life and death, as coexisting, variations of trampling on the Great Nothing.

6. By way of conclusion

Looking back at the way we came, I think I have demonstrated that the stretching and intersecting of cognitive frames, and the dialogue between them, is an important dynamic in both Breytenbach’s poetry and his painting. And unravelling those topological deformations is an illuminating principle for reading his work. It forms the eighth petal of the sacred lotus of his work. The other seven petals of the sacred lotus, other principles for understanding Breytenbach’s work, are explained in my profile of his work (Viljoen 2015).

[iii] In the discussion, Andries Oliphant pointed out that it looks as if smoke is coming out of the top of the figure, similar to the armless, cross-legged female torso on p 39 of Skryt (Breytenbach 1976). This link strengthens the vagina-like associations of Gongshi 6. 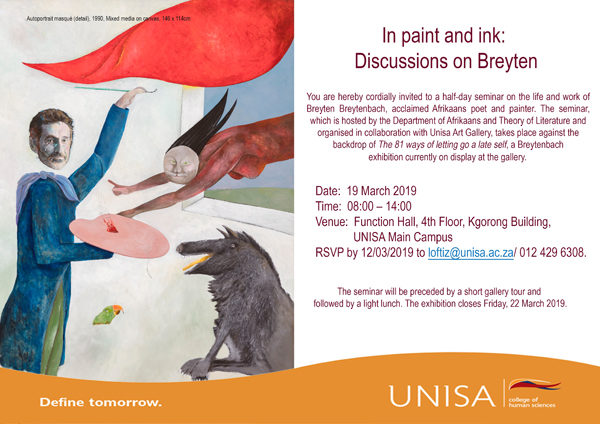