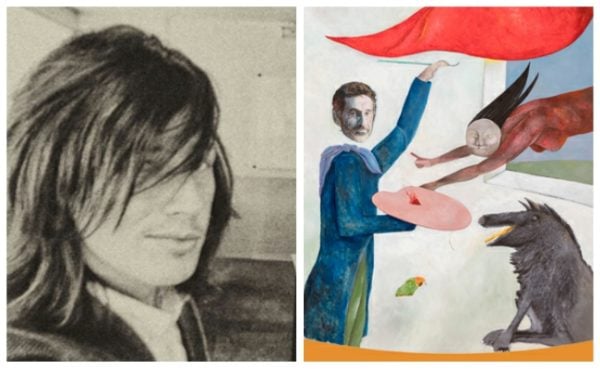 Charles Tait (picture: LitNet) and the poster of Breyten's art exhibition at Unisa (full poster below)

On the 19th of March, a Breyten Seminar was held at Unisa's Department of Afrikaans and Theory of Literature. Charles Tait shares his presentation at the event with LitNet.

The subgenre of birthday poems (the genethliacon, from ancient Greek) in poet-painter Breyten Breytenbach’s vast poetical oeuvre of around 1 600 poems offers entrance into his somewhat idiosyncratic, surrealistic verses. These birthday poems, akin in many ways to annual self-portraits, function as a bridge between the different media of poetry and painting he has variously used as expressive modes during the last half-century (1964–2014). The convention of the painted self-portrait (Dürer’s Self-portrait with landscape from 1498 is one specific intertext, and Goya’s The dog (1819–1823) from the Black paintings another) is central to Breyten Breytenbach’s autobiographical and poetical narrative, emerging from this subgenre. These birthday odes connect Breytenbach to a larger artistic conversation within the tradition. This talk will focus on the idea of the birthday poem as a poetic self-portrait.

Characteristic of the birthday poem is a strong ideological, anti-fascist stance, with intense socio-political engagement throughout. On a more personal level, the psychological phenomenon of the “reminiscence bump” is evident in the intertwinedness of his late work (2007–2014) with his earlier oeuvre (1964–1972). Yet, existing psychological theory (Janssen and Haque 2014) needs to be adjusted somewhat. These elements align with Breyten Breytenbach’s own insights into his work as autobiographical mementos.

From Breyten Breytenbach’s literary debut with Die ysterkoei moet sweet (1964) onwards, certain patterns and rituals can be identified throughout his oeuvre. A prominent example is the subgenre of the birthday poem, which has emerged as a Breytenbach ritual. Mostly, these poems commemorate the poet’s own birthday, but there are odes that are directed at friends and family. Breytenbach’s corpus shifts along with his poetic focus, biographical events and attitudinal changes. Birthday odes are not always clearly identifiable, and often reveal themselves only after a second or third reading. Some are marked by a date, most often 16 September. Others are only identifiable by context or references. These identifiers reveal to the reader that the poem is a commemoration of a birthday, and so a birthday ode.

During the classical period, the birthday ode was an act that connected a social interaction with a religious ritual. The person celebrating their birthday owed the gods an offering for the blessings and protection they had received the previous year. This ritual reinforced social bindings and placed individuals within the context of their family and community. Thus, the literary function of the birthday poem is a recognition of the importance of personal social networks, political and religious acts, as well as societal norms and values, which place the poet within his societal role. These poems act as markers for the poet’s social and political function on a clear timeline. Breytenbach’s birthday poems are yearly reflections that act as self-portraits in words each birthday. Dürer’s self-portraits at different ages have parallels to the birthday poems of Breytenbach. They act as mementos, recordings of moments in the artist’s life. When read together, they form a poetic biography, which acts as a poetic answer to a question the poet asked himself: “Hoekom skryf jy nie jou lewe nie?” (Vyf-en-veertig skemeraandsange, Breytenbach 2014:41). Breytenbach often signs the birthday poems with the initials “BB”, as did Dürer sign his self-portraits with “AD”. In 1991, Breytenbach exhibited a collection of his paintings under the title Self-portraits and other ancestors.

On the theme of “everything you do being a self-portrait”, Breytenbach says, “It springs from the idea that whatever you paint is always being a self-portrait because it always represents your way of seeing” (Sienaert 2004:265). This motif of identity is present in many of the works of Rembrandt, Dürer, Goya and Picasso, visual artists whom Breytenbach references in his poetry, as well as in his own paintings. Breytenbach also speaks back to his younger self as a separate identity: “There is also the older self, the ancestor or ‘other self’. This opens the possibility of interplay, of recognising yourself in others and also recognising others in yourself” (p 265). These themes of self-portraiture bridge poetry with painting, even if the mediums are separate.

The birthday poems act as a stepping stone to uncover the encoded meaning of Breyten Breytenbach’s work. They contain the signifiers that span the totality of his artistic output. The biographical nature of both poetry and painting in Breyten Breytenbach’s work is less an indulgence than a subjective witnessing of both personal and world history. The painter-poet turns inward to understand the world and others better. In his works, we are given an honest attempt at understanding what it is to be human among other humans in regard to identity and all the elements that constitute it, be they social, political or historical.

Special thanks to Dr Helize van Vuuren for her guidance during the writing and research of this overview.