Tell us about the organization Stichting Eer en Herstel. What does it entail, where did the idea for this organization come from and what is your role?

Stichting Eer en Herstel was founded by Roy Groenberg, aka Kaikusi, whose mother was a descendant of enslaved people and whose father was a descendant of the indigenous people of Suriname, South America. He founded Stichting Eer en Herstel 20 years ago because he saw how little was done by the Dutch government to honour and pay respect to the African people who suffered at the hands of Dutch slave traders and Dutch colonialism. He also saw how this denial by the Dutch government affected the descendants of the slave trade in their present life, both mentally and economically. Because of the importance of knowing your history and honouring your ancestors, he started the Stichting Eer en Herstel with this main goal: to ask for recognition and reparation for those who fell into the hands of the Dutch transatlantic slave trade.

My role is to help organize the keti koti (the commemoration) activities, and I also assist the chairman during his meetings with the mayor at the city hall and with other departments of the Dutch government. 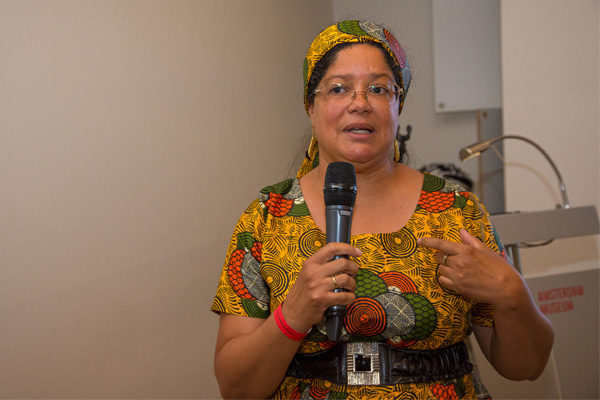 In what ways does your organization acknowledge the Dutch colonial past and commemorate the abolition of slavery in the Netherlands?

We not only commemorate the abolition of slavery, but also honour our ancestors during the whole month of June. As you know, the Netherlands abolished slavery on the first of July. On that date, the Dutch government commemorates the abolition, but for us, the descendants of the enslaved people, this one day is not enough – especially since the majority of the Dutch people are misinformed about the slavery past. That is why we start with our commemorations on the first of June with a march through the streets of Amsterdam that have a direct link with the colonial past and with slavery. This march ends at the mayor’s house, where we sing and pray and lay garlands. The mayor’s house is one of the important colonial buildings from the slavery past. Besides this march, which is the beginning of the keti koti month (commemoration month), we organize lectures, the tori neti and the kabra neti. The tori neti is a story-telling night. We tell stories of our ancestors, just like they would sit together and tell each other stories of the homeland back in Africa. At the kabra neti, we worship our ancestors. We drink and eat the food that they ate and drank during slavery, and we dance and sing and play all the songs and plays that they did in the spare moments they had together with each other. By doing so, we are not only keeping their memories alive, but are also showing our young ones the importance of “knowing your roots”. 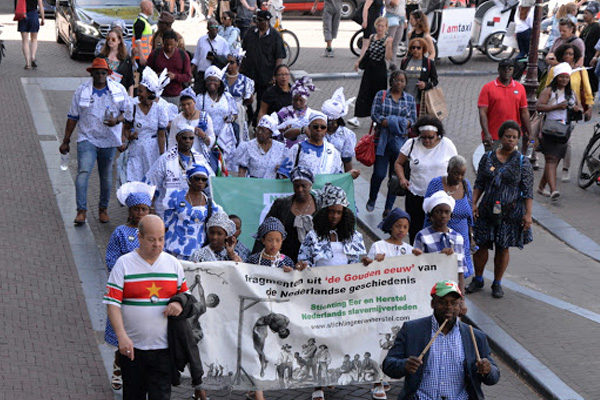 Memre waka (remembrance march on 1 June): We walk down the streets of downtown Amsterdam. 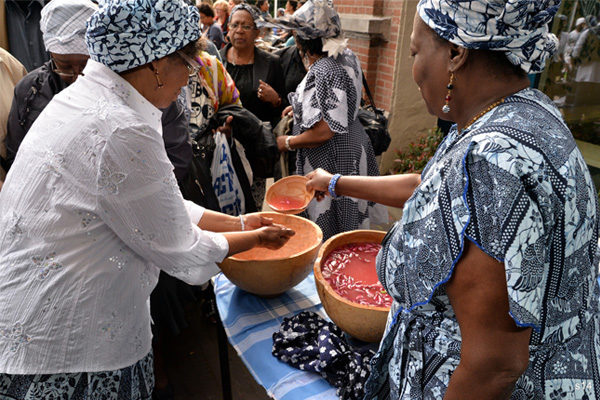 Tori neti (story-telling night): We all wash our hands with swiet watra (that is, perfumed water) before we enter the venue. We do this out of respect for our ancestors. 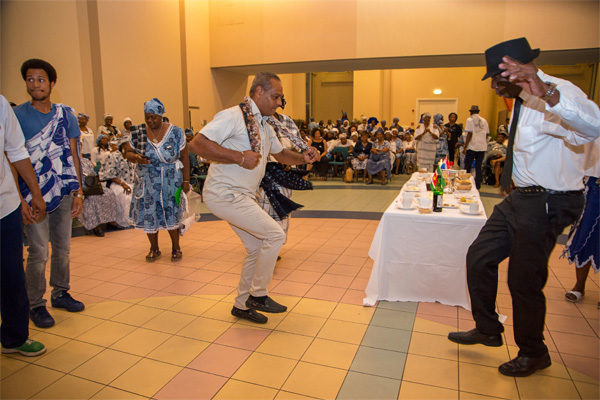 Kabra neti (ancestor worship night): Men are dancing a special dance that our ancestors used to dance. In the background, there is a table with slave food. 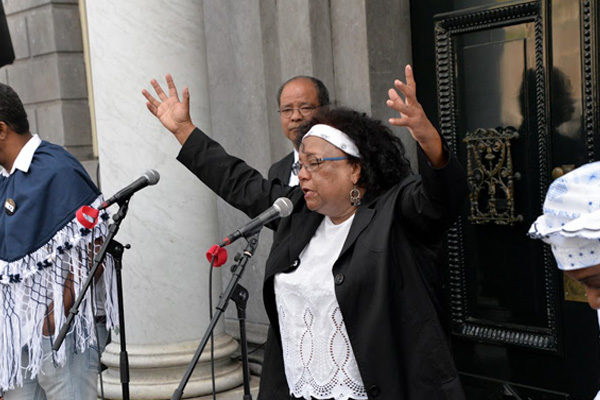 Herdenking (commemoration on 1 June): The poet Diana Ferrus recites her poem, “My name is February”.

What does it mean for you personally to be involved in Stichting Eer en Herstel?

For me, this is a way to bring reparation to our ancestors, who suffered from what we call the African holocaust. I can give them a voice, let people of today know that they lived under inhumane circumstances, and that, thanks to their blood, sweat and tears, huge economies such as that of the Netherlands were built. They deserve some credit for this, and their descendants also deserve to benefit from the wealth the Netherlands gained because they had free labour 24/7 to help build their great country.

In your opinion, to what extent is the Dutch role in the Dutch transatlantic slave trade (Suriname and the Dutch Antilles) and Indian Ocean world slave trade (Batavia, today Jakarta, in the Indonesian archipelago) denied or unknown in the Netherlands?

Many Dutch people say that they don’t have anything to do with the slave trade because they were not the ones who had slaves. Some even say that their ancestors were not involved in it. So, they deny the big part the Netherlands had in the African holocaust, as we call it. It was never taught in school, at least not the real story. Dutch children are taught that the 17th century was the golden century, with huge wealth, etc, but they are not taught who had to pay the price for this wealth.

In this regard, what histories from the colonial and slavery past of Amsterdam should be remembered?

The whole story needs to be told: how the people were stolen from Africa, how inhumane the journey to the Americas was and how they deprived Africa of its human capital. This is one of the main reasons that many African countries are now considered underdeveloped – because many young men and women who could have helped build their country were taken in order to build other people's countries for free. That must be emphasised, because the majority of the Dutch people feel that we, the descendants of African people, are not entitled to share the benefits of this country.

How are the Dutch slavery past and its legacies engaged with in contemporary Dutch society? Do you think that more institutions and festivals like Stichting Eer en Herstel, Het Nationaal Instituut Nederlands Slavernijverleden en Erfenis (NiNsee) and Keti Koti Festival Amsterdam (celebrating the abolition slavery in the Netherlands Antilles and in Suriname) are needed?

I think it is good and important to have these institutions. The number of institutions is not that important; what matters is what they stand for. Their goal is to tell everybody, especially schoolchildren, about the Dutch slavery past and what this means for the people living in the Netherlands today – both black and white, both descendants of the enslaved African people and descendants of the slave traders – because one group has benefited from slavery, while the other group is facing arrears. Another important goal of Stichting Eer en Herstel is to get the Dutch government to apologize on behalf of their ancestors for the cruelties of Dutch slavery.

Some people say that slavery in the Netherlands is just “a black page in history”. What do you think of this statement?

As far as I am concerned, it is not just a page; it is a whole chapter. And it needs to be addressed, because the consequences are still visible in the Netherlands today. The descendants of the enslaved people are, to this day, still struggling with arrears and racism, because the Dutch people still consider them unequal to themselves. The Dutch are not used to discussing this cruel part of their history (nor are they willing to do so). Perhaps it is too painful. But I think that is it necessary to talk about our shared history, in order to understand each other and to reconcile.

Has your organization worked with South African organizations and/or artists before? Tell us a bit more.

No, this is the first year that we have worked with an organization outside the triangle of the Netherlands, Suriname and the Dutch Antilles. Because of the story of Sara Baartman, we contacted Zuid-Afrikahuis, which led us to the writer Diana Ferrus. Once the connection was made, it was clear to us that there was a solid base to keep working together in the future with Diana Ferrus and with South Africa. 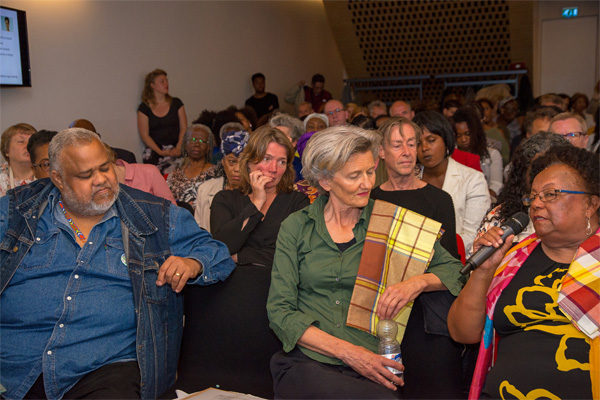 Lezing Sara Baartman (lecture about Sara Baartman): Sitting on the front row, from left to right: Roy Groenberg, the chairman of Stichting Eer en Herstel; Professor Rosemarie Buikema, who told the story of Sara Baartman; and the poet Diana Ferrus.