The new school-leaving certificate, the National Senior Certificate (NSC), was awarded for the first time in 2008. This necessitated a relook at the entrance requirements for university, as the school subjects offered, and the evaluation thereof, had changed considerably compared with those for the previous school-leaving certificate (Senior Certificate). It became important for universities to adjust their admission requirements from the 2009 first-year intake onwards.

The following questions were investigated:

A sample of 176 students who matriculated in 2008 with six or more designated NSC subjects and who were in their first year at UWC in 2009 was considered for this study. The UWC data were used to calculate the APSs according to the 2011 admission requirements of the nine universities. In general, students have to offer a minimum of four subjects from the designated subject list, with a level 4 (≥50 percent) or more, to qualify for university admission. For this study only students who had completed six or more designated subjects were considered.

To further contain the study, only students that could possibly have qualified for a mathematical statistics or computer science degree were considered. These programmes require school mathematics and not mathematical literacy as a subject. Both these programmes are offered at all the universities considered in this study and could, therefore, be compared. The method for calculating the APS differs substantially between the universities, as does the minimum score required for university admission.

To compare the minimum required APS for admission to the respective selected universities the research data of 176 UWC students were used. It was found that only 11 percent of the 176 students admitted to UWC would have qualified for admission at UCT. Although UWC and Rhodes use similar methods for calculating their APSs they have very different minimum APS requirements: Rhodes requires an APS of 40, whereas UWC requires an APS of only 27. Consequently Rhodes would have accepted only 18 percent of the students that were accepted by UWC. Due to the stricter mathematics requirement for the programmes considered, fewer students qualify for these programmes than would have qualified for general university admission.

In order to see what APS would be necessary for a student studying at UWC to successfully complete a first year, the 2009 end-of-year university results of the 176 students of this pilot study were used. Of the 176 UWC students that started their studies in 2009, only 108 (61 percent) progressed to the next academic year in 2010. Their average UWC APS was 41,4 with a 95 percent confidence interval of (40,4; 42,3). If a simplified method is used for calculating the APS, namely summing the school scores (without life orientation (LO)), the 95 percent confidence interval for the mean APS of the students that progressed is (30,4; 32,1). It needs to be noted that both UWC and Rhodes use a more complex method of calculating the APS which inflates the APS by approximately 10 points.

Currently universities differ considerably in their calculation of the APS as well as their minimum entrance requirements. A simplified and standardised method for the calculation of the APS would allow learners and other stakeholders to easily determine the APS required to be selected for a particular tertiary programme. For most programmes further school subject requirements are specified. For the mathematical statistics and computer science programmes at the universities studied, the difference in the school mathematics requirement is most pronounced.

According to this pilot study the APS a student requires to successfully complete the first academic year at UWC, is approximately 30 when the simplified method to calculate the APS is used (summing the scores of six designated school subjects (without LO)). An APS of 30 is currently being used by UP, UKZN and UFS as the minimum requirement for selection. Their method of calculating the APS is very similar to the method proposed by this study.

Additional studies would need to be carried out to confirm the results of this pilot study. Further studies are also needed to determine how the scores of the non-designated subjects should be adjusted for possible inclusion in the calculation of the APS.

The NSC is now standardised across South Africa. If the APS is also calculated in a standardised manner it should be sufficient to use this information to determine which students would be able to succeed at university. The minimum admission requirement could vary from university to university depending on the programme for which a student applies. The minimum APS for a programme should be carefully considered and adjusted so that selected students have a chance to succeed. If academically underprepared students are selected for tertiary studies the universities should be aware that these students will need extensive extra-curricular assistance. Without additional interventions these underprepared students will have no chance of succeeding at university, which is ethically unjustifiable. 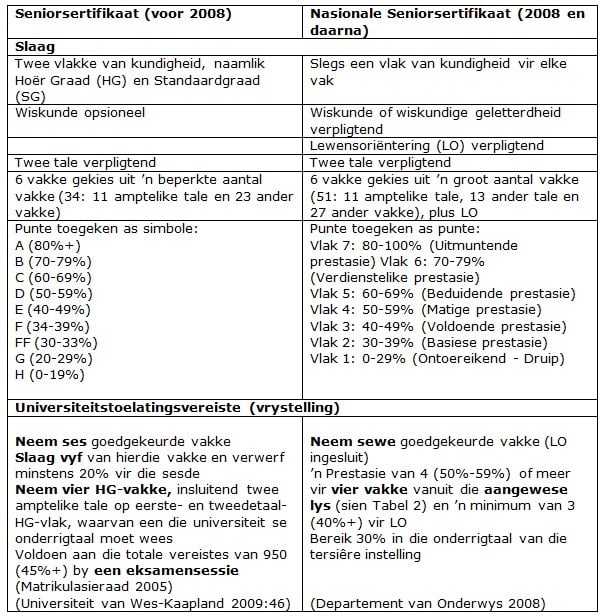 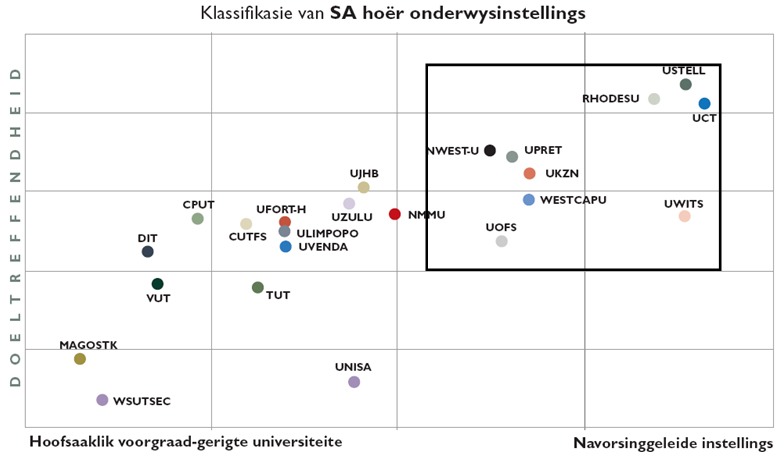 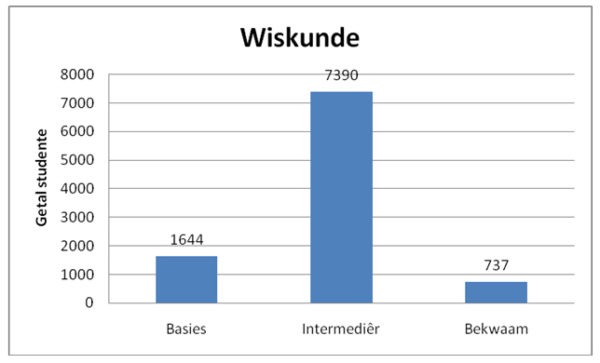 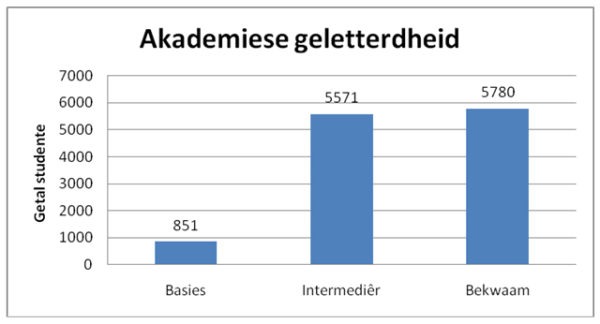 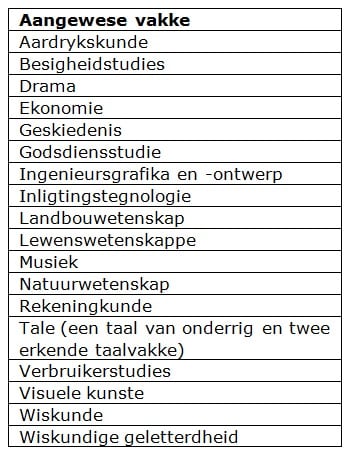 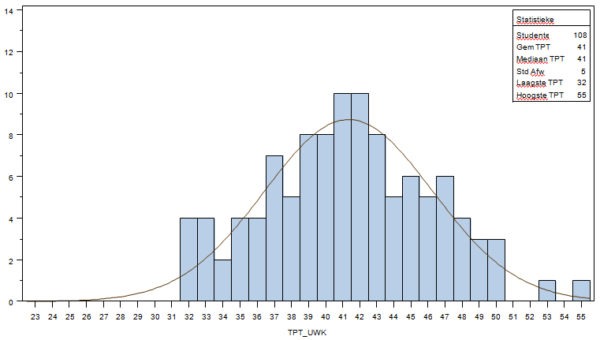 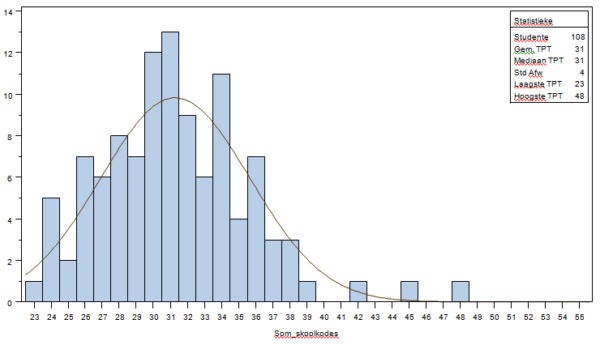 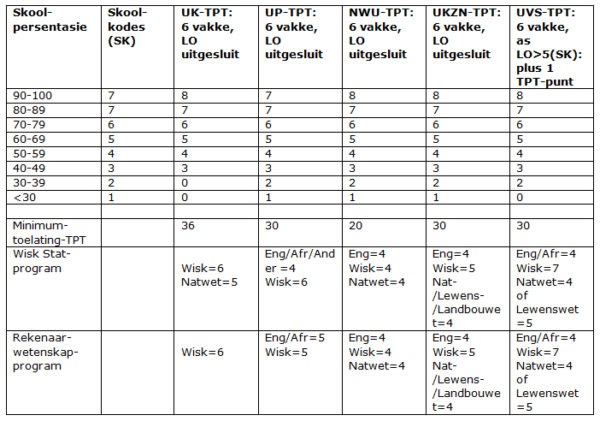 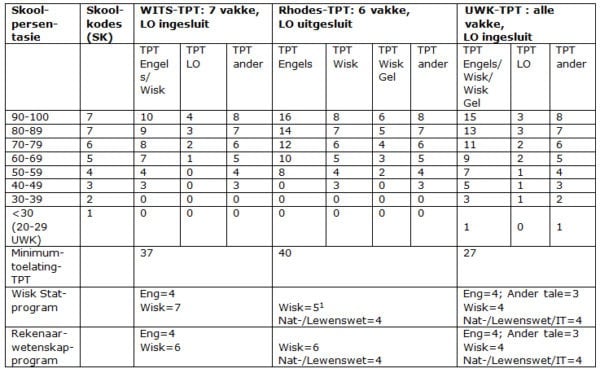