This article reports on such a study undertaken with foreign language students learning Afrikaans at a university. The study examined the use of Afrikaans song lyrics in acquiring the pronunciation of sounds. It showed how the use of the lyrics increased the students’ ability to pronounce the sounds correctly. The main objective of the study was not only to discover whether the lyrics of the songs had a positive effect on the students’ acquiring the typical sounds in Afrikaans, but also to discover why the use of lyrics is effective in Afrikaans pronunciation learning. To achieve this, 34 first-year students enrolled in an Afrikaans language acquisition module were examined.

The theoretical framework for the study is the communicative approach to second-language acquisition. Engh (2012) postulates that since the communicative approach and the task-based approach to language teaching have been used as theoretical underpinnings in second-language teaching the demand for more pedagogically grounded reasons for the use of music and lyrics has increased. Engh (2012:113) states: “While many teachers intuitively felt music was beneficial in teaching English language, there was also the perception that there was a lack of understanding of the theoretical underpinnings that supported such a choice.” Researchers such as Ayotte (2004), Brand and Li (2009) and Ulate (2007) based their studies on the use of music in foreign language classrooms with specific reference to Krashen’s second language acquisition theory.

Thirty-four first year students who enrolled in the Afrikaans Language Acquisition 178 module completed the questionnaire which gathered information on the students’ language background – for example on their home language, their attitude towards and their experience and current knowledge of Afrikaans, as well as their experience of Afrikaans music and their attitude towards Afrikaans music. They also had to rate their general Afrikaans language skills by using the self-assessment grid of the European Reference Framework. They specifically had to rate their proficiency in Afrikaans pronunciation. They had to list their favourite music genre – the reason for this was to lower the affective filters of the students in the experimental group by giving them song lyrics in their preferred music genres. All the students were recorded and then observed in the classroom setting. The recordings were transcribed according to the International Phonetics Alphabet (IPA).

At the end of the study all the students were recorded again. The recordings were transcribed and analysed.

A mixed-method approach of quantitative and qualitative research was undertaken through the use of questionnaires, classroom observations and recordings to study whether listening to Afrikaans music with lyrics will help students to learn Afrikaans sounds as well as improve their Afrikaans pronunciation. Steps were taken to ensure the validity of the results by triangulations. Only data about which there was no doubt about was used. As authors we are aware that two of the data input methods used (questionnaire and music grid), are subjective and deliver unverifiable input which does have a restricted effect on the results. Because of the many variables in this study we present the pronunciation results as a case study by comparing nine participants’ recordings with the data collected from their questionnaires. We used five participants from the experimental group and four from the control group.

This research had some restrictions which could have had an influence on the results. Of the initial 34 students, 22 were recorded, while only 14 students were recorded for the second recordings: 10 from the experimental group and four from the control group. The reasons for this were that students were not in class for one or both recordings, students were recorded only once, or some students’ pronunciation was so good in the first recording that they were eliminated from the study. Other limitations were that students did not always come to class and recording them was a challenge, and the time limit to listen to the music was limited; were the students to have been given longer time, the results could have been different. Some students did not listen to the music as instructed. Initially the students had to complete a post-questionnaire, but because of time restrictions we did not get to those questionnaires. We are also aware that in a study like this it is difficult to restrict, on the one hand, the exposure to only music as input for the experimental group and on the other hand for the control group not to receive more input than only in the classroom.

The main finding was that the students’ pronunciation benefited by their listening to Afrikaans music with lyrics. 61% of the sounds not pronounced correctly initially were pronounced correctly after the students had listened to the music. In the control group only 26% improved their pronunciation. In the first recording the following sounds were pronounced incorrectly: [y:], [f], [œy], [u:], [k] en [x], and [r] was omitted. We found a direct correlation between the students’ attitude towards Afrikaans, Afrikaans music and the music they listened to. We came to the conclusion that the use of song lyrics benefited the students. 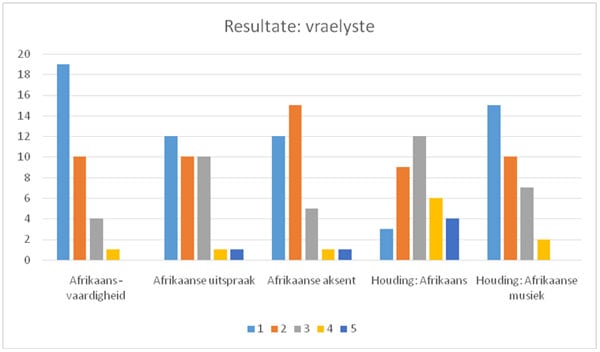 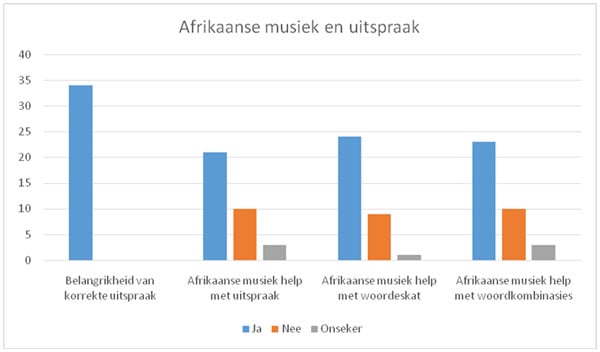 Op die vraag of die studente dink dat Afrikaanse musiek hulle met woordeskat kan help, het 24 “ja” geantwoord en nege “nee”. Die een student wat “onseker” geantwoord het, het haar/sy keuse soos volg gemotiveer: “I am not sure. I have found it difficult in the past to learn new words. It is easier to form the sounds and mimic them than to learn the language. Just experience will tell if it helps.”

By singing or at least listening, you can find out what it sounds like and practice [sic] by yourself through already, preceedingly, [sic] knowing what it sounds like. This is truly an ideal way to learn, which is both enjoyable and informative. Also, it really opens you up to the Afrikaans culture, which is rich and interesting.

Meyer, J. 2013. Phonetics: What is the difference between pronunciation and accent? www.quora.com (8 November 2015 geraadpleeg).