Despite the fact that the pre-service teachers received the link to the Google Forms survey on multiple electronic platforms (WhatsApp groups, Google Classroom and student email) and received two additional reminders, only 55 pre-service teachers completed the voluntary survey. The first page of the survey was an informed consent form where the pre-service teachers had to agree to participate in the study, before they could continue with the survey. The survey aimed to identify participants for the interview phase of this study and not to collect data that could be generalised. From this survey nine pre-service teachers were identified for the qualitative follow-up interviews, as they indicated that they had previously experienced ethical dilemmas. Section A of the survey gathered biographical information of the participants in order to describe the sample. Section B consisted of closed-ended questions that aimed to determine how pre-service teachers were prepared for ethics in teaching practice, and identify those who had previously experienced ethical dilemmas during their teaching practice. Section C consisted of three open-ended questions that aimed to gain greater insight into pre-service teachers’ opinions of the ethics preparation that they had received in their teacher training programme at the university. The data from the survey were analysed by downloading it as an Excel document and then uploading it to the SPSS computer software to analyse the closed-ended questions from section A and section B. The data from the open-ended questions in section C were then analysed thematically by using structural coding, where the answers to each question were analysed separately. Colour coding was used to mark similar themes at each question.

All nine pre-service teachers who were identified from the surveys agreed to participate in the second phase of semi-structured follow-up interviews. These interviews aimed to gain a deeper insight into the ethical dilemmas that the pre-service teachers experienced during their teaching practice, and also find out if and how these ethical dilemmas were addressed. The fixed questions on the interview schedule were asked in each interview; however, the follow-up questions varied according to the responses. All participants gave permission for the voice recordings of these interviews to be used to aid the transcription. The transcriptions were then analysed through thematic analysis using two cycles of coding. In the first cycle of coding the transcriptions, data were themed individually and then compared to look for similar and contrasting themes. Theme mapping was then employed to categorise the themes. After categorising the themes, they were further grouped and re-categorised in order to condense the large data set. Finally, the second cycle of coding employed focused coding, where the categories were grouped into four overarching themes, namely ethics policies and protocols, pre-service teachers’ ethical dilemmas, reporting ethical dilemmas, and ethics training for teaching practice. 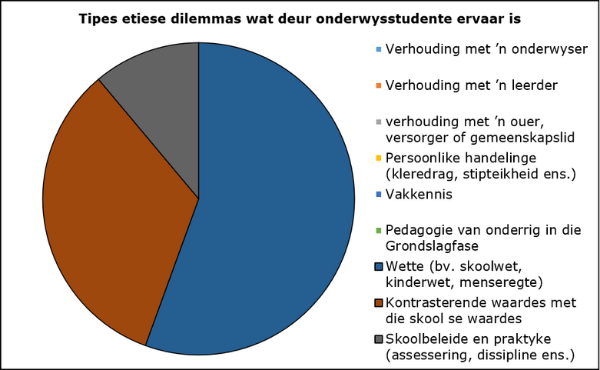 … regarding the Apartheid years and teachers and students are humiliated in front of the teachers and colleagues … because it affected, uhm, the children’s behaviour towards me, because, uhm, I was never referred to as, uhm, a student or a teacher, I was always referred to as “the white one” and, uhm, or as the, uhm, from the colour of my skin. I was never, uhm, called by my name or my surname. (PST28: In 6.178 − 7.214) [Ingevolge die Apartheidsjare word onderwysers en studente verneder voor die ander onderwysers en kollegas … en dit het die leerders se gedrag teenoor my beïnvloed. Ek is nooit juffrou genoem nie. Hulle het my altyd “die wit een” genoem na aanleiding van die kleur van my vel. Ek is nooit op my naam of van aangespreek nie.]

… I’m not used to handling children of that − of that specific culture it’s difficult to know how to react with them, how to teach them. (PST37: In 12.285 − 12.287) [Ek is nie gewoond daaraan om kinders van daardie spesifieke kultuur te hanteer nie en dit was vir my moeilik om te weet hoe om rondom hulle te reageer en hulle te onderrig.]

I thought that he was a principal with a lot of power and, uhm, I was afraid that he would have found out that I was the one, uhm, who complained about it … and I was afraid that he would have known that I was the one doing that, because I was the one standing out at the school, and, uhm, then it would have come out and I believe he − he would have made my life horrible. (PST28: In 8.227 − 8.235) [Ek het gedink dat hy as skoolhoof baie mag het en ek was bang dat hy sou uitvind ek was die een wat gaan kla het … Omdat ek die een was wat uitgestaan het by die skool was ek bang hy sou weet dit was ek, en uhm, ek glo dat hy my lewe baie moeilik sou gemaak het as hy wel uitgevind het dit was ek.]

I’m not really sure the steps to follow … They never tell you the steps to take so it’s just, they give you the rules, but they never told you about “if you have a problem, you should follow these steps”. That was never mentioned. (PST28: In 12.367 − 12.369) [Ek is nie seker wat die stappe is wat gevolg moet word nie … Hulle verduidelik nooit die stappe nie, hulle gee vir jou die reëls, maar hulle het nooit verduidelik watter stappe om te volg as jy ’n probleem ervaar nie. Dit is nooit genoem nie.]

Yeah, it could be, maybe part of a subject, uh, like maybe part of Professional Practice, like that would be like a little sub-division that you do alone for the first few months. (PST37: In 19.162 − 19.164) [Ja, dit kan dalk deel van ’n vak soos Professionele Praktyk vorm, soos ’n onderafdeling wat die eerste paar maande alleen aangespreek word].

Campbell, E. 2000. Professional ethics in teaching: Towards the development of a code of practice. Cambridge Journal of Education, 30(2):203–21.

Maxwell, B. 2015. A survey of ethics curriculum in Canadian initial teachers education. McGill Journal of Education, 50(1):1–18.