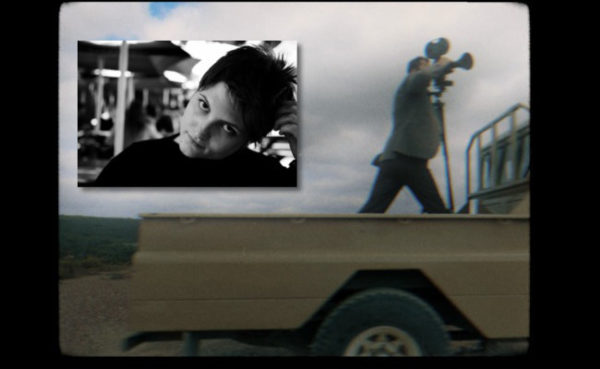 What separates Muller’s approach from its Western counterparts is the fact that Wesens is very much rooted in the sociopolitical and cultural climate of apartheid-era South Africa.

What if, in 1967, an unidentified flying object crashed in the Karoo desert, and four agents – cameras at the ready to document everything – were sent to investigate? This is exactly the premise of writer-director Derick Muller’s feature film Wesens (2020).

Full disclosure: as a self-professed “alien invasion junkie”, I needed no convincing to jump, face first, into Muller’s offering. And adding the fact that it happens to be shot within the found footage genre – well, Mr Muller, now you have my undivided attention.

The film centres on four agents from the South African Intelligence Agency who are sent to investigate a crashed unidentified flying object on an isolated Karoo farm in December 1967. Shot on Super 8 millimetre and 16 millimetre cameras, the film feels reminiscent of other found footage classics like The Blair Witch project (1999) and more recent tropes like Cloverfield (2008), Trollhunter (2010), The sacrament (2013) and the highly underrated Spanish found footage effort by directors Jaume Balagueró and Paco Plaza, Rec (2007).

When considering Wesens, there are a multitude of angles from which to access the cinematic genre, narrative and mise en scène. Rather than offering a movie review, I would like to frame the film from my personal vantage point, as an invested devotee of the church of cinematography. The alien invasion genre has long since been a favourite of Hollywood’s left filmmakers, and it would be difficult to look at Muller’s opus without acknowledging the classic 1950s prototype canon, with films like It came from outer space (1953), Invaders from Mars (1953), Earth vs the flying saucers (1956), The thing from another world (1951) and my personal favourite, Invasion of the body snatchers (1956). Wesens plays into this model by positioning the unidentified object as the inverse, belligerent “other”, in keeping with the formula of the traditional alien invasion cinematic anthology. What separates Muller’s approach from its Western counterparts is the fact that Wesens is very much rooted in the sociopolitical and cultural climate of apartheid-era South Africa. The sci-fi films of the 1950s tended to set the “unknown” or the “alien” against the backdrop of an urban, civilised society. Muller subverts this convention in Wesens (translated as “Beings”) by using the desolate Karoo landscape as a backdrop, almost evoking the semblance of an Indigenous Area 51 – a liminal space that feels simultaneously primordial and ethereal. A landscape where the characters presented through the restricted lens of the 8 and 16 millimetre cameras embody the conflicting yet narrow ideologies of the 1960s, and in particular 1967.

In February 1967, the first crewed moon mission, Apollo 1, was unsuccessful with disastrous effect when all three crew members died during the launch sequence. For the first time, however, the probability of human space travel – although momentarily ill-fated – was imminent. And the double-edged sword of human ingenuity versus our capacity for continued injustice and violence hung in the balance – the latter motivated by international war efforts and the civil rights movement in the USA. Inside our own borders, the incumbent National Party was notorious for its patriarchal, Christian and predominantly conservative values. By 1967, the year in which Wesens is set, the ruling party was passing the 1967 Terrorism Act, a piece of legislation that would essentially grant law enforcement unchecked control over detainees and turn into what law professor John Dugard called “an instrument of terror”. This is an important point of reference when looking at the violent predisposition of Major Martinus Viljoen (played by Morné Visser). It becomes apparent that Wesens is not your mother’s old sci-fi film. It moves effortlessly across the border of a well-made film towards the threshold of relevant social critique. This makes Wesens feel somehow fresh and current, even though it shares many common threads with the 1950s sci-fi classics.

The parallels between the use of the “other” in the classic alien invasion genre and the racially charged alterity of 1960s South Africa becomes more apparent as the narrative unfolds. Even the stylistic choice of using found footage becomes more than just a way to explore alternative cinematography, but rather an intentional creative choice. To my mind, the found footage style of the content in Wesens becomes a heavily layered metaphor that acts as an “emotional lens” for the viewer. The combination of suspenseful cowboy, medium and choker shots of characters makes the viewer feel as if the inner world of the individual somehow outweighs the bigger national narrative.

Let’s compare the more conventional alien invasion narratives against Muller’s adaptation of the genre. To some extent, the typical time-honoured approach of alien invasion films was a reaction to the fear and uncertainty of the future. The alien invaders symbolised the fear and uncertainty; filmmakers were tasked with imagining all the monstrous creatures of possibility, lurking in the unknown depths of “what is yet to come”. In Muller’s adaptation, he inverts this convention. To my mind, Wesens reimagines these monstrous creatures from our collective past and acknowledges that even now, we carry remnants of this violent legacy as part of our identity. This can easily be argued as the purest form of terror, the terror within. This fear manifests as a way of forcefully reminding one of the price owed for blissful ignorance. For a character like Viljoen to maintain his narrow worldview and his conservative belief system, creatures like the humanoid “beings” cannot and must not exist. The alien beings – who seem far more adapted to the hostile Karoo landscape than the four agents – confront the agents with an alternative ideology – one could even argue, an alternative creation myth.

The alien invaders symbolised the fear and uncertainty; filmmakers were tasked with imagining all the monstrous creatures of possibility, lurking in the unknown depths of “what is yet to come”. In Muller’s adaptation, he inverts this convention.

One of the beings identifies herself as Kaang, and in a popular African bushman creation myth, Kaang, or Kaggen, is positioned as the Great Master and Lord of all Life. In Wesens, after the first male being appears and abruptly dies, a second female alien being emerges. Here, the double-edged sword once again tips towards violence as Viljoen regains consciousness and kills her before any meaningful contact between “species” can be made. Granted, this reaction seems excessively violent, but I would argue that Muller finds a way to offer critique rather than presenting the audience with a character judgement of Viljoen’s role as possible antagonist. As I mentioned earlier, for a character like Viljoen to cling to the ideologies that make up his identity, his sense of self, beings like the alien invaders and what they represent cannot exist. Their mere existence puts into question everything that Viljoen and the dogma he represents consider to be true. The violent reaction can be interpreted as an inherent part of resistance. To resist and, in this case, reject alternative ideologies removed from the self, is a regressive and even violent act. I would like to take this argument one step further by questioning whether any significant social change can manifest by simply “flipping the script”.

Let me take a moment to explain what I mean by this. Traditionally, Kaang is a male, a trickster god who can shape-shift, among other things, into a praying mantis or a Hottentotsgot (which translates to “God of the Bushmen”). This is also referenced in the film. Already, the deliberate choice to make Kaang female should tell us something. For Viljoen to accept not only that these beings exist, but that their historical narrative as first people puts them solely at the apex of society, he also has to relinquish his power position as a white male. By “flipping the script”, I mean to say that simply imagining a society where the power dynamics shift from the white male to the first people female isn’t enough. It’s as if Viljoen cannot imagine an alternative outside of the existing social system that excludes him as a white male. And the act of resistance is fuelled by the anger of exclusion. This anger turns into rage, rage that cannot sustain itself and collapses under its own weight. This rage promises punishment to women and people of colour, and it delivers on that promise in the character Viljoen.

Wesens leaves the characters (themselves governmental associates) with no escape.

It would be problematic to look at Wesens without referring to the other South African alien invasion staple, District 9 (2009). There are undeniable comparisons between the two, and to do both films justice would call for an entirely separate analysis. What I can say, however, is that both films use the same genre conventions to tackle different subject matter. While District 9 felt like the stronger of the two from a cinematic perspective, Wesens’s social critique seems more direct, current and, at times, unpredictable. Where the classic sci-fi genre sets up the military and other governmental associates as a line of defence between the self and the “other”, Wesens leaves the characters (themselves governmental associates) with no escape. They are made to face the true alienating force to be reckoned with, their own imposed ideologies and the legacy of delegitimising indigenous narratives through violence.

Wesens is “a deep exploration of humankind”