The COVID-19 pandemic and the structural vulnerability of day labourers in Windhoek, Namibia

Namibia celebrated 30 years of independence in 2021. The COVID-19 pandemic has had disastrous economic consequences for Namibia, as it has for most countries. Like its neighbours, Namibia has macroeconomic problems to contend with, such as high levels of unemployment and poverty, with the associated social challenges. In 2013, 56% of the Namibian population survived on less than two USA dollars a day. The latest youth unemployment rate is 46,1%. Namibia’s economy contracted by 6,5% (on a year on year basis) in the first quarter of 2021. This decline followed a downward revision of 5,9% in the last quarter of 2020. Unemployed people in Namibia (as in most developing countries) turn to the informal economy in an attempt to earn a living. According to the latest Namibian labour force survey (2016), which is available in the public domain, the informal employment rate of the country is 66,5%. Day labourers are a pertinent example in this regard. Individual unemployment forces many people to offer their labour on street corners and intersections and in front of hardware stores in an attempt to find temporary work for a day or a few days in order to make a living. Namibians refer to these work seekers as “street unemployed”. This type of work seeking is characterised by very high levels of uncertainty about the possibility of finding employment and a significant variance in the income received for a day’s work – if one becomes employed. The COVID-19 pandemic also adversely affected this sector in Namibia.

The purpose of this study was twofold: firstly, to expand the existing literature on the informal labour markets of day labourers in Southern Africa, focusing on Namibia’s capital. The specific aim was to investigate the frequency of employment, the type of work, the income and the poverty profile of day labourers in Windhoek. The second aim was to use the information to reflect on the possible impact of the COVID-19 pandemic on informal employment in Windhoek.

In the decades since the pioneering work of Hart (1973) the literature has confirmed the permanent nature and emergence of informality in economies and labour markets in especially developing countries. Contrary to predictions based on accepted growth theories such as that of Rostow (1960), the informal economy clearly did not disappear as economies grew and developed. In the nearly 50 years since Hart’s 1973 study, academic discourse has developed three theoretical models for explaining and analysing the different manifestations of the informal sector – each with its own implications and policy issues. The three frameworks are known as the dualistic approach, the structuralist approach (sometimes known as the neo-Marxist approach) and the legalistic approach (sometimes known as the neoliberal approach). The structuralist approach emphasises that the informal economy is suppressed and exploited by the formal economy. The legalistic approach explains the rise of the informal economy as a rational response to over-regulation in the formal economy. The dualistic approach views the informal economy as a possible safety net for low-skilled immigrants who migrate from rural to urban areas to earn an income in any way possible. It is evident from the available literature that the socio-economic position of day labourers in Windhoek was already under tremendous pressure two decades ago. It highlights the timely nature of this study to determine how these circumstances changed. As the capital of Namibia and the city with the largest population in the country Windhoek is indeed the administrative, commercial and industrial heartbeat of Namibia. The population of Windhoek was estimated at 431 000 in 2020 compared with 392 000 in 2017. The number of inhabitants is increasing due to a constant influx of migrants from all over Namibia. The absolute and relative size of the city meant that there would theoretically be enough day labourers who could be part of the research sample. Thanks to the work of Gonzo and Plattner (2003), the authors also knew that day labourers were indeed active in the city’s local economy. This was also confirmed in informal conversations with Men on the Side of the Road (MSR), a non-governmental organisation that works very closely with the day labourers in Windhoek to improve their skills and help them to find jobs.

The research design for the Windhoek study is based on the established practices of similar studies in the United States of America and South Africa. It applied mixed-method research and during the fieldwork 80 day labourers were interviewed in Windhoek over three days during the second half of 2017. After completion of the fieldwork, all the questionnaires were examined to ensure that each questionnaire complied with the research standards in terms of completeness and readability. Questionnaires that were not legible or complete did not form part of the final data set. The data were captured in Excel and the subsequent analysis was performed in EViews. The study adhered to strict ethical principles and approval was obtained from the relevant ethics committees of the North-West University and the University of the Western Cape with registration number 14/3/10.

The results show that almost all of the day labourers in Windhoek at the time of the study were male. Only 3,75% of the respondents had successfully completed their school career (matric) and only one day labourer had obtained an post-school qualification. Sixty-five of the 80 respondents indicated Oshivambo as their mother tongue. Eight of the day labourers were Afrikaans-speaking, two English-speaking, and five indicated Damara. The data furthermore confirmed that most day labourers (76) in Windhoek originated from inside Namibia. It represents (95%) of the respondents. Only one (1,25%) respondent was born in South Africa, two (2,5%) were from Angola and a one (1,25%) was originally from Zimbabwe. In terms of the success achieved in this job search activity the results are dismal. From Monday to Saturday the success rate of all of the day labourers standing on each particular day was never higher than 22% (on a Monday). In other words, on a Monday up to 78% of day labourers were unsuccessful in their attempts to obtain a temporary job. They could therefore be considered unemployed for the day. This figure increased during the week and on Friday was as high as 88%. The average daily unemployment rate from Monday to Saturday was 82%. Fewer day labourers stood on the street corners on Saturdays and even fewer on Sundays. The success rate on Sundays for the 25 day labourers who did stand seemed to be better, with 11 (44%) getting a job. Further investigation indicates that Sunday activities mostly do not include construction work, but rather gardening and loading and unloading. It also explains the difference in compensation between the activities. At least 75% of the day labourers’ jobs in Windhoek in the week before the interview were broadly related to activities in the construction industry.

The COVID-19 pandemic and the downturn in the Namibian economy could therefore have devastating consequences for day labourers with a profound social and societal impact. For Namibia’s relatively small open economy, which has been experiencing a protracted recession since the beginning of 2016, this crisis could not have struck at a worse time.

The results of this study indicate that the dim prospects for the construction industry will be nothing short of disastrous for the day labourers in Windhoek. In 2020 the direct impact of the COVID-19 pandemic on the construction industry was catastrophic for both the formal economy and informal workers such as day labourers. The sector shrank by 11,8% in 2020 after activities in this sector drastically decreased due to the pandemic. In order to provide further context to the discussion, the income levels of day labourers were compared with the three official monthly poverty thresholds in Namibia in 2015/2016. The food poverty line, lower poverty line and higher poverty line (per person) were N$ 293,10, N$ 389,30 and N$ 520,80 respectively. In a good month, between 2,6 and 12,8% of day labourers would have lived in poverty – if they had to take care only of themselves. In a bad month, the poverty rate rises to between 29,5 and 55,1%. In a good month, taking into account their dependents, the poverty rate was between 34,6 and 59%. It weakens significantly to between 78,2 and 87,2% in a bad month. The structural vulnerability of day labourers in Windhoek was therefore already clear in 2016. The impact of Namibia’s macroeconomic reality and the COVID-19 pandemic could plunge even more unemployed day labourers into absolute poverty with all the associated socio-economic consequences. This situation is not likely to improve any time soon. Further research and appropriate evidence-based social policies are urgently needed and require immediate implementation. 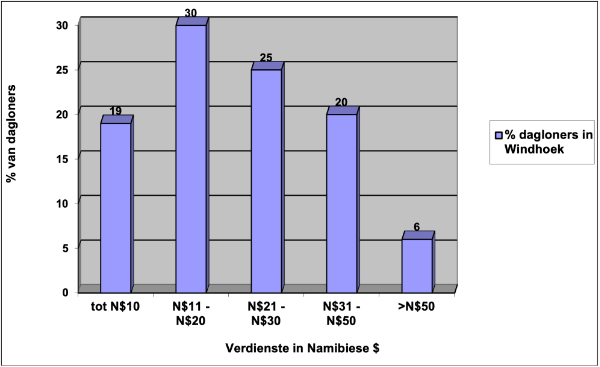 Three quarters of the investigated “street unemployed” earn less than N$30 per job, a shocking result, especially in light of the fact that the majority of the respondents either get only one job per week or nothing at all. In addition, 83% of the respondents declared that they have no other means of income. These income figures are better understood when one considers that Windhoek is one of Africa’s most expensive cities and N$301 per week is by far not enough for food, let alone accommodation and other basic needs. 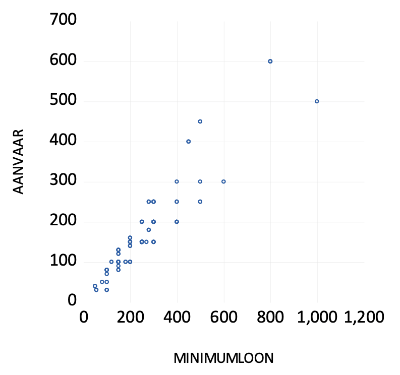 De Soto, H. 1989. The other path: The invisible revolution in the Third World. New York: Harper and Row.

McKeever, M. 2007. Fall back or spring forward? Labor market transitions and the informal economy in South Africa. Research in Social Stratification and Mobility, 24:73–87.

Yusuff, O. 2011. A theoretical analysis of the concept of informal economy and informality in developing countries. European Journal of Social Sciences, 20:624–36.