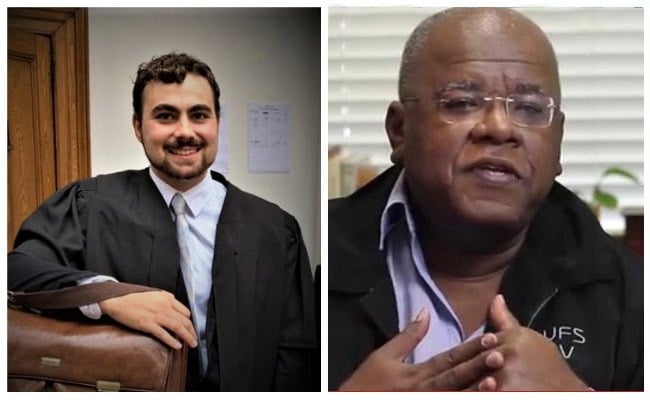 A riposte to Jonathan Jansen

His most recent windmill charge is filled with those juicy points of contestation that permeate the opinion pieces written by late risers, those that come to debates such as this without catching up on the past week’s reading. I could not resist a riposte, and I do so in English to illustrate two things: First, because there is a lack of English-language opinion pieces explaining the side of the newcomer students, who are the victims of certain residences’ enforcement of an unlawful and totalising “English only” decree during the welcoming period. The second is to show Jonathan Jansen and the readers that we activists who are fighting this injustice (who, by the way, proudly reclaim the semi-pejorative term taalstryder as used in his article) are not Mauser-carrying warriors from the 19th century, filled with an indiscriminate hate for anything English. Indeed, considering the Stellenbosch language activists to be romantically anti-English boils down to wilfully misconstruing the oppressive experiences suffered by the 2021 newcomers in this saga. Also, a “No English” approach was never part of our thinking on language practice and policy, but rather that as a matter of restitutionary justice language policy at public institutions must proactively deploy indigenous languages even if English is used for certain practical purposes.

So, let’s cry “Havoc!” and let slip the dogs of the war; the first hound of contest being Jansen’s sleepy finding that the newcomers’ claims of language oppression are not corroborated.

Jansen fails to back this claim, this despite the fact that a representative of the Minerva women’s residence’s newcomers appeared on a Newzroom Afrika and SABC interview with a consistent version of events, and was joined by journalist William Sezoe of Die Matie student newspaper, who had sleuthed the same occurrences in the Irene women’s residence as well as the broader ring of residences contained in the AmaMaties cluster. Moreover, the Democratic Alliance, on a fact-finding mission to Stellenbosch, spoke to representatives of the Voortrekkers (an Afrikaans cultural and civic organisation focused on younger people) and StudentePlein (a Stellenbosch University-focused group supporting students’ studies in Afrikaans and fighting exclusion of the Afrikaans language), who also relayed messages from anonymous newcomers that had experienced the same pattern of language oppression, all of them being Afrikaans students being “ordered” to speak English, even in informal settings. If Jansen wanted more, he could have called his colleague director of student communities, Pieter Kloppers, who is still dealing with some of the fallout. Knowing at least one point of origin of these controversies, he could have contacted the resident head of Minerva, who had hosted a meeting with the head student of that residence and the aggrieved newcomers, during which the head student acknowledged that students were being coerced to speak only English in all residence and welcoming settings. All these stories have the same golden thread: Residence leaders are telling newcomers to speak only English in their respective communities, creating a culture of fear and shame about one’s mother tongue. The majority of outrage comes from Afrikaans students, but it is conceivable that other language groups are also affected by such a totalitarian decree.

Jansen then tries to back up his first point by arguing that such grievous events are impossible, because they are not in line with university policy. This is as disingenuous as it is logically fallacious. Does Jansen seriously believe that because such discrimination ought not be tolerated, and is contrary to the Stellenbosch University language policy, it cannot actually exist in reality, as if by magic? If Jansen’s line of argument explained the workings of the world, then I would be able to instantly transform myself into the Sultan of Bahrain simply because I believe it ought to be so. The point is that Jansen cannot hope to derive the state of the present from how things ought to be in policy and law. He tries to back up his point about corroboration further by arguing that the newcomers’ grievance cannot be established as plausible, because it is difficult to ascertain when people speak what languages on a multilingual campus. All I will say here is what on earth does that have to do with the impeachable event of residence leaders’ unlawfully decreeing that newcomers should speak nothing but English?

Thirdly, Jansen strangely digresses from the issue of residence leaders oppressing other languages in favour of English by digging into the related, yet currently less relevant question of what language(s) should operate in the formal, public campus environment. Jansen reveals his astounding naivety on issues of language, colonial history and power in society by arguing that language activism is old hat, since it is better that students rally around a common language, English, in conjunction with multilingualism and polyglotism. While this sounds grand on the face of it, and I myself also subscribe to practical multilingualism, albeit a much more nuanced version of it, Jansen does not explain how indigenous languages and knowledge will be shielded from the hegemonic force that is the global English language. This is important, because English does not exist on an equal footing with any other South African official language. It had already gained vast ground by being enforced through the colonial power structure, which prized and standardised knowledge creation in English, as if it were the only measure of human sophistication. English dominance and its vast, globalised historical privileging are so overbearing that less and less space is afforded other indigenous languages. The state of the remaining Celtic languages in the British Isles, such as Irish and Welsh, attests to this. Letting residence leaders decree such intrusive measures such as that nothing but English may be spoken, even in informal settings, entrenches this lingering coloniality. It denies South African language groups an opportunity to integrate their languages into the national public realm in a sustainable and equitable way. Moreover, the Constitution itself prizes increased, not decreased, public esteem for the official languages of South Africa. Speakers of indigenous languages can be rightfully concerned about where skills and sustainable growth in their languages, which underscore human dignity, will flow from if room for anything but English in the public realm is gradually chipped away. Universities and schools, as Jansen must know, are potential engines of such sustainable growth for all languages.

Lastly, by charging windmills armed with the flattened trope of “white, Afrikaans and conservative”, Jansen brings nothing new to the table. He flies in the face of the healthy umbrella approach to Afrikaans by open-minded organisations such as DAK Netwerk, the ATKV and the Afrikaans Language Board (Afrikaanse Taalraad). He centralises a particular segment of political Afrikanerdom in his take on Afrikaans, and ignores the plight of Afrikaans speakers from other political leanings and ethnic backgrounds. It denies everyone but his windmills a place in the debate. It is furthermore shocking that Jansen buys into the Stellenbosch University management’s gaslighting of vulnerable newcomers by stating or implying that newcomers are claiming discrimination where there is none. This he does by framing the whole debate in terms of the “white, Afrikaans conservate” trope, which has nothing to do with the constitutional prohibition of discrimination on the basis of language, or the act of denying language communities the right to use and flourish in their languages. Jansen confuses a mere aspect of the history of South African language activism with this clear and untenable case of language oppression.

Of course, Jansen at least sticks to his guns as a renowned and uncreative anglophile. This I personally recall from an incident at a 2018 meeting of student heads of the Maties residences, where Jansen was a speaker. When I asked him whether it was healthy, given the important efforts toward a more Afro-centric, decolonialised and South Africa-focused system of knowledge creation, to uncritically import social strategies and concepts from universities in the USA, he answered emphatically that while local knowledge is lekker, the more established knowledge centred in the (anglophone) USA must steer what we do here.

There you have it, folks. The man who washes his mouth over the experiences of vulnerable Stellenbosch first years despite the evidence, has a foot permanently logged in the Englishness of the global West. And sadly, it seems as though he will not be jettisoning this curious attitude any time soon.