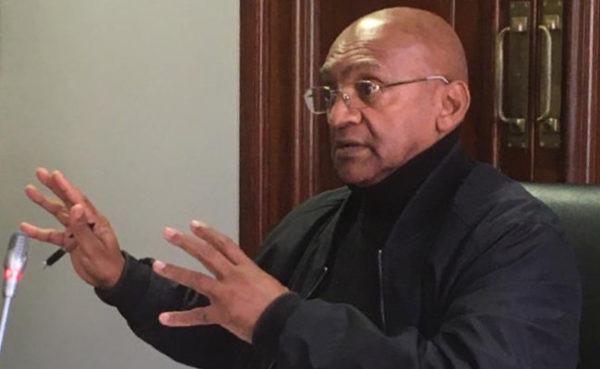 DAK is an acronym for the names of three prominent Khoi leaders during the early 1600’s, namely  Doman, Autshumao en Krotoa. Read an interview with Danie van Wyk, chair person of the DAK Netwerk, for more background on the organisation.

The South African Human Rights Commission convened an inquiry into allegations of a prohibition on the use of Afrikaans at Stellenbosch University.  Below is the speech of David Jantjies at the event.

Allow me, first of all, to let you know that to sit here today to address the South African Human Rights Commission is, for me personally, and as a representative of the DAK Network and other Afrikaans-speaking people of our country, a highly emotional encounter.

I say this because the people representing DAK here today are direct and indirect descendants of the First Nations, the Foundation Nations, of our land – and even of the continent of Africa. We were here, by all accounts, long before “a long, long time ago”.

I further believe a brief look into our history may be relevant in order to underpin my brief submission.

Commissioner, the San tribe has been living in southern Africa for at least 30 000 years, and they are believed to be not only the oldest African tribe, but quite possibly the world’s most ancient race. The San have the most diverse and distinct DNA of all the indigenous African groups.

The first inhabitants of South Africa were the San and the Khoekhoe. The San and Khoe descended from early Stone Age people and migrated from their birthplace in East Africa down here to the Cape, in all probability gleefully treading on this very soil on which Stellenbosch University is situated today.

Historians agree, to a large extent, that the San are the oldest of the Foundation Nations of Africa, followed by the Nama of southern Africa, the Hadza of Tanzania, the African Pygmies of central Africa, the Sandawe of eastern Africa and the Berbers of North Africa.

Just for the record: the Berbers speak Berber, the Sandawe speak Sandawe, the Hadza speak Hadza, the Nama speak Nama and Afrikaans, and the remaining 90 000 San speak all languages of the Khoe, Kx’a and Tuu language families. And they speak Afrikaans.

The Afrikaans language, also called Cape Dutch and the West Germanic language of South Africa, developed from 17th-century Dutch, sometimes called Netherlandic, with the descendants of European (Dutch, German and French) colonists, (and, Commissioner,) indigenous Khoisan peoples, and (Sir) African and Asian slaves in the Dutch colony ... at the Cape of Good Hope ... right here in South Africa.

Afrikaans was developed here at the foot of Africa. It is a southern African language of distinction.

It was spoken by peasants, the urban proletariat – whatever their ethnic background – and even the middle class of civil servants, traders and teachers.

Afrikaans had to withstand several serious attacks on its existence over the past two centuries, yet it developed from a language spoken by the people of this land, often behind cupped hands in the kitchen and on the farms, into a highly cultured, internationally aligned, academically vibrant and scientific language. Today, Afrikaans cannot be denied its powerful stand as a language of trade, culture and education.

Currently, Afrikaans is being spoken by an ever-increasing 7,2 million people across the board. Some Afrikaans speakers are white, some are brown, some are black. Some Afrikaans speakers are highly qualified intellectuals, professionals and community leaders, while some are less-educated manual workers, office workers and students. It is the language of the rich and the poor, the old and the young, the language of the urban and the rural people.

Commissioner, I repeat: Afrikaans was developed here at the foot of Africa. It is a southern African language of distinction.

Only about four out of every ten Afrikaans speakers are racially white, and the language has developed a multitude of variants, including Orange River Afrikaans, Eastern Cape Afrikaans, Namakwa-Afrikaans and Afrikaaps. Awhe, my massekint! The language is being spoken throughout South Africa, Namibia, Zimbabwe and Botswana.

Commissioner, Afrikaans was developed here at the foot of Africa. It is a southern African language of distinction, and it can in no way be denied its rightful place as a language of the soil.

And so, if the question arises whether Afrikaans is an indigenous language, anyone entering this debate or drafting a policy, or attempting to regulate or systemise its position, first needs to familiarise him/herself with the historical facts that underlie this widely spoken and studied language.

You simply cannot wake up one good morning and decide that Afrikaans is not an indigenous African language. You cannot just use your position as a minister of higher education or the rector of a university or a member of a university board to minimise the relevance of a language, the mother tongue of millions – indeed, a language of trade, culture and education.

You simply, Commissioner, cannot deny even one student from being educated and assessed, and from acquiring a qualification in his/her language of choice.

Institutions of higher learning throughout the world generally work with the top 5% of intellectually astute young people. They are the gifted.

Gifted individuals are those who demonstrate outstanding levels of aptitude or competence.

They demonstrate keen powers of abstraction, interest in problem solving and applying concepts, and intellectual curiosity, and they are equipped with the power of critical thinking, scepticism and even self-criticism.

They exhibit creativeness and inventiveness, openness to stimuli, wide interests, intuitiveness and flexibility.

Commissioner, these top achievers present with spontaneity and boundless enthusiasm. They are highly energetic, constantly question, have insatiable curiosity. They are impulsive, eager and spirited. And they possess perseverance and strong determination in areas of importance.

Commissioner, we can under no circumstances allow these brilliant students to fall through the net just because someone, for some weird reason, has decided to eliminate a particular language.

And should that official put the argument forward that Afrikaans-speaking students, for that matter, be denied their preferred language of instruction based on the pronouncement that Afrikaans is not an indigenous African language, then the least we should do is to determine what an indigenous language is.

It is common knowledge, Commissioner, that an indigenous language is defined as: “A language that is native to a region and spoken by indigenous people of the same cultural value and belief”.

Further, Sir, an indigenous language is a language that is native to a particular group of people and spoken by the indigenous people living in the locality.

Lastly, Commissioner, an indigenous language is a language that is native to a region and spoken by indigenous people, often reduced to the status of a minority language. This language would be from a linguistically distinct community that has been settled in the area for many generations.

I put it to you, Sir, that Afrikaans is, indeed, a language that is native to a region and spoken by indigenous people of the same cultural value and belief.

It is, indeed, a local means of communication between members of us as a people, of us Afrikaans speakers as a community.

Afrikaans contains within it the essence of considerable information and knowledge and wisdom of the people and community. And indeed, Commissioner, its loss (as suggested) is therefore a loss of Indigenous Knowledge Intelligence.

Commissioner, Sir, further, Afrikaans as a purely South African indigenous language, is indeed a language that is native to a particular group of people and spoken by the indigenous people living in the subcontinent.

Lastly, Commissioner, Afrikaans is undoubtedly an indigenous language, native to southern Africa as a region and spoken by indigenous people. And yes, right now, this very debate suggests the reduction of Afrikaans to the status of a minority language. Note, Sir: this language unquestionably originates from a linguistically distinct community that has been settled in this land for many generations.

There are 7 139 languages spoken in the world today. Although indigenous peoples make up less than 6% of the global population, they speak more than 4 000 of the world’s languages. These indigenous languages are spoken by communities who make considerable contributions to dynamic living in a rapidly changing world – as do the Afrikaans-speaking inhabitants of South Africa.

Other examples are Quechua, spoken in Peru, and Aymara, spoken in Bolivia. This is where Spanish is the dominant formal language. In Greenland, Kalaallisut, an indigenous language, even gained status as the sole official language in 2009.

It is generally accepted that a land gives birth to an indigenous language. South Africa, Commissioner, gave birth to Afrikaans. The First Nations peoples and the slaves from the East created Afrikaans right here – obviously influenced by the words and phrases they also learned from the Europeans with whom they interacted.

However, about 140 years ago, strong-armed, white Afrikaans speakers wrongfully claimed Afrikaans as their language, and in 1925 it was declared an official language of South Africa. Almost 100 years later, here we sit as descendants of the Khoe and the San. We have grown up with our mother tongue, Commissioner. We have struggled to gain an education in Afrikaans. We have pulled ourselves up by our own bootstraps in Afrikaans. The indigenous people, in the famous words attributed to Julius Caesar, say to you today, Commissioner, “Veni, Vidi, Vici.” DAK, as leaders in and of our community, truly came; we saw; we conquered.

DAK believes that the human rights of the Afrikaans-speaking community have been infringed by the language policy of Stellenbosch University, as it deems Afrikaans not to be an indigenous language and thus not worthy of being a language of instruction.

DAK believes that the human rights of prospective students who are Afrikaans speaking have been infringed, as they could not see themselves as strong enough in English to engage with higher learning, while, for various reasons, they would have preferred Stellenbosch University.

Commissioner, if 12 out of the top 20 schools in this province are Afrikaans first-language, why deny our children the opportunity to study in Afrikaans?

In a province where 80% of the citizens speak Afrikaans, why deny our children the opportunity to study in Afrikaans?

Commissioner, when the predominantly Afrikaans schools last year pushed up the national matric pass rate from 68,2% to 76,2%, why deny our children the opportunity to study in Afrikaans?

When Afrikaans home language schools attain an overall 82% in mathematics, why deny our children the opportunity to study in Afrikaans, their mother tongue?

Commissioner, inclusive of and yet despite all the aforementioned facts and figures, our plea is that Stellenbosch University should simply review and rescind its language policy and rid it of any discrimination, in particular insofar as Afrikaans as a language of instruction, accessibility of learning material, freedom of speech, and life on campus in general is concerned.

Rightly or wrongly, Sir, word out there is that Stellenbosch University has become an English-only institution of higher learning. If this is wrong, or if the wrong impression has been created, DAK pleas that speedy corrective measures be applied to inform the South African public of the opposite. Afrikaans-speaking students must know that they are welcome here.

Rightly or wrongly, Commissioner, word out there is that Stellenbosch University has become an English-only institution of higher learning, because Afrikaans is not an indigenous language. If this is wrong, or if the wrong impression has been created, DAK pleas that speedy corrective measures be applied to inform the South African public of the opposite.

Finally, Commissioner, DAK is ready and equipped and avails itself to assist SU, in any form or format, to correct the wrongs of the immediate past with regard to its language policy, and we are prepared to help make the university the best institution of higher learning ever.