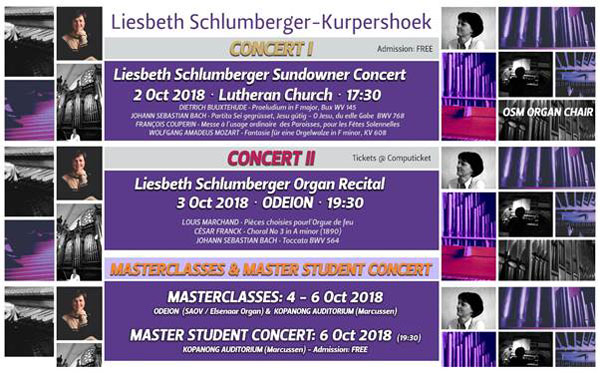 The ODEION SCHOOL OF MUSIC (OSM) at the University of the Free State is proud to present the third event of the OSM Liesbeth Schlumberger Organ Chair, which will take place 3-6 October 2018.

The Liesbeth Schlumberger-Kurpershoek Organ Chair was founded in 2015 by Marius Coetzee and is positioned under the OSM International Artistic Mentorship Programme (IAMP). The main objective of the IAMP being establishing partnerships with musicians (soloists, chamber musicians and pedagogues) who are pursuing and already have established careers as musicians internationally. On par with international tendencies the OSM deploy these experts as instructors to coach and mentor OSM students complimentary to the local residential OSM performance faculty. The Odeion String Quartet presents a bi-annual International String Chamber Workshop and OSM clarinet lecturer Danre Strydom presents a bi-annual  International Clarinet Extravaganza  in collaboration with Buffet Crampon. From 28 September—1 October the second Maria Kliegel International Masterclass series & Concert curated by Anmari van der Westhuizen will be presented at the OSM 28 September—1 October 2018.

The amount of students studying the organ has declined drastically in South African during the last two decades. Therefore, it is imperative for the OSM that the initiatives and intellectual capital generated by the organ chair will be optimally accessible to all South African students, lecturers, liturgical and amateur organists.

For the 2018 Liesbeth Schlumberger Organ Chair, Schlumberger will present two recitals. The first recital will take place on 2 October in the German Lutheran Church (Ott Organ) at 17h30. This recital is assembled from works by Bach, Couperin & Mozart. The second recital will take place on the 3rd of October in the Odeion (SAOB /Jan Elsenaar Organ). This is recital will comprise of works by Louis Marchand, César Franck and Bach. (Please view the detailed repertoire list.)

Liesbeth Schlumberger-Kurpershoek commenced her organ studies while still at school by travelling fortnightly from Vryheid, Northern Natal to Parktown, Johannesburg, for lessons with the late Prof Stephanus Zondagh. This doyen of South African organ teachers taught for many years at of the University of Pretoria from where Liesbeth subsequently graduated.

In 1985 she won both the SABC Music Prize and the UNISA Overseas Study Bursary which enabled her to go to France in 1987 to study the organ under Marie-Claire Alain at the Conservatoire National de Rueil-Malmaison and harpsichord with Huguette Dreyfuss.

Later she furthered her organ studies under Jean Boyer at the Conservatoire National de Région in Lille and improvisation with Jean Langlais. ln 1989 she won first prize in the International Organ Competition held in Bordeaux.

In 1994, Liesbeth was appointed Organist of the Reformed Church of Etoile in Paris, a two minute walk from the Arc de Triomphe,where she plays a superb Cavaillé-Coll organ that is wonderfully suited to the repertoire of French Organ Music of the 19th and 20th century. At the church she organises a concert series entitled "Sunday Music" at which some of the finest musicians in Europe perform.

In 1996 Liesbeth Schlumberger was appointed assistant to Jean Boyer at the Conservatoire National Supérieur de Musique in Lyon, France. This legendary teacher died in 2004 at the young age of 56. Since 2005 Liesbeth Schlumberger and Francois Espinasse have carried forward his legacy in Lyon. In addition, she is an active recitalist and frequently conducts masterclasses.

In 2010 she was an adjudicator at the Chartres International Organ Competition, one of the most prestigious of its kind in the organworld.