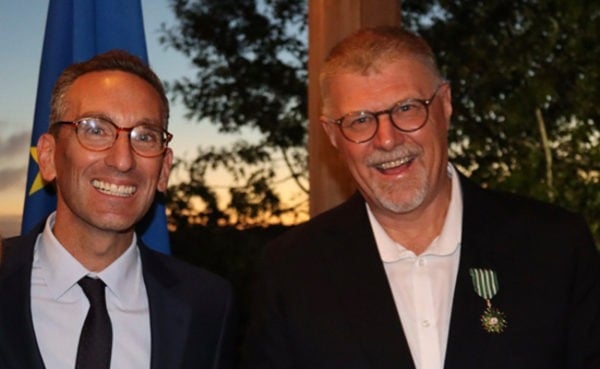 The Ambassador of France to South Africa, His ExcellencyAurélien Lechevallier and Deon Meyer (credit: The French Embassy)

On Tuesday, 20 April 2021, the Ambassador of France to South Africa, His Excellency Mr Aurélien Lechevallier, bestowed upon South African crime fiction author and screenwriter, Mr Deon Meyer, the award of Chevalier des Arts et des Lettres (Knight in the Order of Arts and Letters) on behalf of the French President at Glenelly Estate in Stellenbosch.

Deon Meyer is a South African crime fiction author and screenwriter who has published fifteen novels and three short story collections. His books have been translated into 27 languages and published in more than 40 countries worldwide. Two of his books, Dead before dying and Trackers, were turned into international TV series. Deon has also written series for television and screenplays for feature films, and has produced and directed movies in his native Afrikaans. Throughout his career Deon has received many international awards for his books, including in France, with Le Grand Prix de Littérature Policière (2003) and Le Prix Mystère de la critique (2004). Deon Meyer is a great friend of France and loves spending the European summer in the beautiful city of Bordeaux. His appointment as Knight of Arts and Letters comes in recognition of his work and his special relationship with France, reflected in many of his books. A part of Deon’s latest novel, The last hunt is set in Bordeaux, where the South African character Thobela Mpayipheli lives under the French name Daniel Darret.

About the Order of Arts and Letters

The Order of Arts and Letters is a French order established in 1957 and awarded by the French Ministry of Culture in recognition of significant contributions to the enrichment of the arts and literature in France and abroad. There are three degrees: knight, officer and commander. Some South African citizens who have been awarded the order are: Johnny Clegg (1991), William Kentridge (2013), Gregory Maqoma (2017) Zanele Muholi (2017) and Jonathan Shapiro (“Zapiro”) (2019).

Photo: The Ambassador of France to South Africa, His ExcellencyAurélien Lechevallier and Deon Meyer (credit: The French Embassy)