On Tuesday, 20 April 2021, the Ambassador of France to South Africa, His Excellency Mr Aurélien Lechevallier, bestowed upon South African crime fiction author and screenwriter, Mr Deon Meyer, the award of Chevalier des Arts et des Lettres (Knight in the Order of Arts and Letters) on behalf of the French President at Glenelly Estate in Stellenbosch. Here is the Commendatio (Discours) delivered at the event. 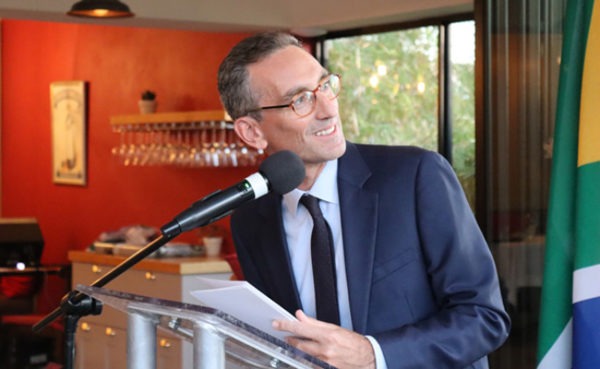 The Ambassador of France to South Africa, His Excellency Mr Aurélien Lechevallier, delivered the Discours (Commendatio)

Welcome to Stellenbosch and welcome to Glenelly Estate. Thank you all for being here for this very special occasion. Thank you to the Bureau family – Nicolas, Philippine and Maxime (not here today) – for welcoming us tonight, in this breathtaking venue. We could not have dreamt of a more magical setting for this ceremony.

This evening we are very honoured and proud to celebrate a unique writer in his home town of Stellenbosch. A native son - “Un enfant du pays,” as we would say in French.

He is the man South Africa can call with pride its best crime fiction author, whose reputation has long crossed the South African borders to reach Europe and France. His books have been translated into 27 languages and published in more than 40 countries worldwide, and he has already received numerous international awards. His characters have even made it on to TV and the big screen.

Tonight we are also celebrating a friend who fell in love with France – I think a long time ago – way before France fell in love with his books. This unique relationship with France, reflected in his novels, makes him a strong and valuable ambassador of French-South African cultural bonds.

We are gathered today in Stellenbosch, where you live and write most of the year. I know you like to escape from time to time – you have travelled all over the world, but especially enjoy our European summer in Bordeaux, your French city of the heart.

Being here today is a beautiful metaphor of your life between these two special places, as modern Glenelly was founded by a French family from Bordeaux. You were not able to visit France last year, and so we are bringing France to you: the sea, the sun, the wine, the “art de vivre” …

But for now, let’s go back in time.

You were born in the city of Paarl on July 4th, 1958, not too far from here. You spent most of your childhood in Klerksdorp, in North-West. This is where you started to learn French with a wonderful French teacher, Mr Coetzee. A voracious reader, you would gobble up books about European history, the French Revolution and its ideals. You matriculated in 1976, before joining civil aviation for you military service.

In 1980 you graduated from Potchefstroom University and obtained a Bachelor of Arts. Following your studies you decided to get involved in social projects and worked for a year with young people from disadvantaged backgrounds, in the midst of the apartheid regime.

You really started your career as a journalist in 1981, working at Die Volksblad, an Afrikaans newspaper in Bloemfontein. Between 1983 and 1989, you joined the public relations office of the Free State University and at the same time obtained a Bachelor of Arts in history and law.

In 1989, you continued your career with the Sanlam Group, where you were successively appointed manager of internal communication and creative director of the publicity department.

After leaving Sanlam you decided to fly solo and created your own media company in 2000, New Media Digital. This new chapter of your life gave you the opportunity to indulge in one of your passions, as you became an independent consultant for BMW motorcycles. As some of your novels show, BMW bikers have a great heart, unlike these Harley-Davidson posers!

Despite a successful career and an active family life you never gave up your passion for writing. At the time of your entrepreneurial years, you had already written four books. The second one, Dead before dying, published in France in 2002, was the one that made you win the hearts of the French readers. The novel was awarded the Grand prix de la littérature policière the following year.

By simple coincidence, or maybe driven by this success, it is also in 2003 that you started a Master’s degree in creative writing at the University of Stellenbosch. Five years later you made the decision to devote your time fully to writing, to your readers’ greatest pleasure.

I feel that you are a man of many passions: motorcycles, wine, writing, but also music, which is a common thread through your work, from the opera – the Barber of Seville in Dead before dying – to the bass guitar in Afrikaner rock bands.

Dear Deon, I cannot tell if one is born to be a writer, or if you only become one over time. I read somewhere that you wrote your first book when you were 14 years old, and bribed and blackmailed your two brothers into reading it. Apparently, they were not very impressed! But we are all extremely glad this did not stop you.

Many years later, only a few contemporary writers could claim that they were personally congratulated by the great Stephen King himself for their work. I am sure you did not miss the opportunity to tell your brothers!

If Dead before dying was the novel which made you famous among French readers, it also had a great significance in South Africa. Its original edition – Feniks – came out in 1996, two years after Nelson Mandela had become President of South Africa.

In the story you used the voices of the four main characters to paint a picture of the “new” South African society. Your characters, like the nation itself, try to navigate between their attempts to forget the past, start a new life and embrace a new identity, like the mythical phoenix bird. Today we think of this after the terrible fires in Cape Town, as we know the city will thrive again after this tragedy.

I have to admit that for many of us at the French Embassy your novels have been one of the first introductions to South Africa. Be it Devil’s Peak or Blood safari, your novels are embedded in the South African landscape, its society, history and people.

We want to know how the story ends, who committed the crime, and we don’t even resent the fact that you awarded French citizenship to one of your most gruesome killers, Kobra, because we love learning about South Africa, its wonders and contrasts.

Now, despite our flawless mastery of the Afrikaans language, we are so impatient to have the English translation of your latest novel Donkerdrif, which is set right here, in Stellenbosch.

In 2021 your novels continue to be a mirror of South African society and its evolution. You share with your readers your doubts and fears about the world, at a South African level but also on a global scale.

Racism, corruption, social divisions and climate change are real threats to our contemporary societies, themes that are largely present in your latest books. Many say you even anticipated the Coronavirus pandemic in Fever, where you depicted with brutal talent a post-apocalyptic society where a virus had killed most of the world’s population. Let’s hope we will not get to that point!

Along the way you developed a strong relationship with France. If you first visited Paris, it is the city of Bordeaux that stole your heart. Since the novel Icarus, published in 2015, where you mention the beautiful vineyards of Bordeaux, you have never tried to hide your love for the Nouvelle Aquitaine region.

“How can you explain love at first sight?” you even said in an interview, talking about Bordeaux. The beautiful architecture, the people, the wine, everything there makes you feel at home. It is maybe why you decided to set the opening chapter of The last hunt on the banks of the Garonne River, on a summer night, while the story ends in Paris, near the famous Champs Elysée. The last hunt also pays a beautiful tribute to Bordeaux’s cathedral, la cathédrale Saint-André. Not to mention the fact that it is in a charming restaurant in Bordeaux, named Au Bistrot, that you got engaged to Marianne.

Your love of France is not only for its landmarks, but also its people and joie de vivre. Your friend Henry Lefevre – who is among us tonight, braving limited flights and closed borders – was one of those people who introduced you to France and its way of life. Your first trip together was to la Dune du Pilat – the tallest sand dune in Europe – after which you knew you would be back. With this adventurous explorer you cycled through the forests of Soulac-sur Mer, and the Roger Lapébie cycle track is one of your favourites.

But let me tell you one thing, dear Deon. The love is mutual. French readers are among your greatest fans, and we all feel so privileged to see how inspiring our country can be to you. My predecessor, Ambassador Christophe Farnaud, and the French team present here proposed your name for this distinction, and I am honoured to be the one standing before you today.

We are not only celebrating the writer, the South African master of crime fiction, but also the friend, the francophile, the artist and the sharp political critic that you are, dear Deon.

On behalf of the Government of the Republic of France and by virtue of the authority vested in me, I have the honour and pleasure, Deon Meyer, to bestow upon you the title of Knight of the Order of Arts and Letters, de vous faire Chevalier des Arts et des Lettres.