On Tuesday, 20 April 2021, the Ambassador of France to South Africa, His Excellency Mr Aurélien Lechevallier, bestowed upon South African crime fiction author and screenwriter, Mr Deon Meyer, the award of Chevalier des Arts et des Lettres (Knight in the Order of Arts and Letters) on behalf of the French President at Glenelly Estate in Stellenbosch. Below is Deon Meyer’s speech at the ceremony. 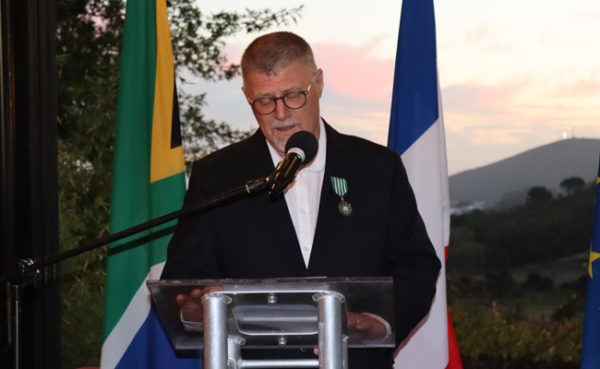 If ever there was an occasion during which I would have wanted to speak in perfect French, this is it.

However, two years of French in school, and one year of special French at university just isn’t going to be good enough. So, to save the dignity of the language, the dignity of the occasion, and my own dignity, please forgive me for speaking in English.

If you would permit me, I would like to tell you a story. It is a love story. It spans almost fifty years. It starts with six French words: Le chat est sur le mur. The cat is on the wall. And, like all good love stories, it has moments of sadness and loss, and a beautiful ending.

The story starts in Klerksdorp, which, if you know the town, is an unusual place for a love story with a happy ending to start. Nevertheless, it is where I fell in love with French for the first time, when, as a fourteen-year-old, I chose it as a school subject.

Mr Coetzee was an unlikely teacher: nerdish, introverted and soft-spoken. A little eccentric. But when he taught us French, he somehow came alive, and he taught us with style, and passion. In no time at all, I was in love with the sounds and rhythms of French.

Le chat est sur le mur was the first full sentence I could say in French.

I used it a lot. I told my parents, my brothers, my friends, and especially the girls I wanted to impress, that the cat was on the wall. In a perfect French accent, as if it was a deep philosophical truth.

To my great regret – but if you know Klerksdorp, it makes perfect sense – there were not enough students who wanted to continue taking French. So my French cat could not make any progress to bigger and more imposing structures, and for the next four years my knowledge of French would slowly dissipate.

At university I had the opportunity to take one year of French again, and I jumped at the chance. This time, my lecturer was the lovely mademoiselle Vorster, and I promptly fell in love with her. Not only because of her beautiful French pronunciation.

As I warned you at the start, love stories have their sad moments, and this is one of them: Except for honing my French accent and giving me passable marks, mademoiselle Vorster did not love me back. But I will always be grateful for her gentle instruction, and her affection for everything French. And anyway, I would eventually marry the most beautiful Vorster of all, my lovely Marianne. Which made it all worthwhile, because everybody knows that Marianne is the embodiment of the French Republic.

It was all, I think, written in the stars.

It is my Marianne’s birthday today, which makes this even more special.

For the next almost twenty years of our story, life happened. I worked very hard, had a family, and my cat stayed on the wall, so to speak. I neither spoke nor learnt any French, and was slowly coming to the realisation that it must have been amour d’jeunesse, just puppy love.

And then, at the age of thirty-eight, in 1996, divorced and at what was probably the lowest point of my life, I was suddenly given the opportunity to spend a few days in Paris, on my way to Chicago for an internet conference.

I flew to London, took the Eurostar to the Gare du Nord, and the metro to Saint Michel.

Coming up the stairs in the early evening, with the vibrant Place Saint-Michel in front of me, with dancers, and music, and people, traffic buzzing on the boulevard, and on the Quai Saint-Michel, the aroma of street food, the bustle of the Latin Quarter … It was overwhelming, and utterly breathtaking. It was everything that I had dreamt the City of Light to be, and I fell in love all over again. This time not only with the language, but with Paris. And the country. And the food.

I also have to confess that I had to suppress the rather overwhelming urge to tell the guy in Rue Monsieur le Prince selling excellent crêpes that le chat est sur le mur just to show him that I speak a little French.

Alas, this visit to France was sweet but so very short, and for the next six years I pined and longed to go back, to experience more, but was just too impoverished to afford it. So you might be able to imagine my great excitement and joy when, in 2002, my agent Isobel Dixon phoned to tell me that monsieur Robert Pepin, famous Éditions du Seuil editor of, amongst others, the great Michael Connelly’s translated works, was going to publish my crime novels. Not only did this include an invitation to return to Paris, but it was also a tiny glimmer of hope that my love for France would no longer be unrequited.

And so, over the next twenty years, the affair developed. I had the great honour and privilege to get to know Paris, Lyon, Toulouse, Strasbourg, Saint-Malo, Montpellier, Marseilles, Avingon, Lourmarin, Grignan, Grenoble, Nantes, Pau, Arcachon, Saint-Jean-de-Luz, to name but a few. And finally, of course, our beloved Bordeaux.

In the process I had the great pleasure of forging lifelong friendships – with bookshop staff, festival organisers, authors, journalists, publishers, French ambassadors, and consuls, Airbnb landlords, and, of course, the incredibly generous French readers, without whom I would not be standing here today.

Your Excellency, please allow me to thank a few of these individuals who had such a great influence on my journey, and the love for your country. First of all, thank you, Marianne. For sharing my love for France, and for being such a delightful travelling companion on our French adventures. My agent Isobel Dixon, my French agent Michèle Kanonidis and my first French editor, Robert Pepin, who took a gamble on an author who was selling just a few hundred books in his native South Africa, and guided me to two French literary awards. My publicist at Éditions du Seuil, Marie-Claire Chalvet, who forgave my bad French and worked so hard to establish me as an author. Marie-Caroline Aubert, the grand dame of French crime fiction who later became my editor at Le Seuil, and now at Gallimard. They have all had such a huge influence on my success. My Afrikaans editor Etienne Bloemhof is here tonight. He was the editor on my first book to be translated into French, and we’ve been working together ever since. Thank you, Etienne, for launching me on this journey.

Former French ambassador His Excellency monsieur Christophe Farnaud, who recommended me for this incredible honour, former consul in Cape Town, monsieur Laurent Amar, who became a valued friend. France can be proud of both. They are a credit to their country.

Thank you, Professor Catherine du Toit, for your efforts in improving my French, for your translations and your support.

The wonderful staff of the French Embassy in Pretoria and the Consulate in Cape Town, particularly Pascale Tremen, Aurélie Chauveau-Caron, and Victoria Labaye.

And of course, Your Excellency, I would like to thank you for the great dignity and patience with which you managed this process during such extraordinary times, and for bestowing this incredible honour on me.

To all the people here tonight, thank you for sharing this with us. You have all been such a valuable part in our lives, and have contributed in one way or another to shaping me. May I single out the man who came 12 000 kilometres to be with us tonight, braving so many Covid obstacles, my friend Henry Levefre. Bienvenue, Henri. Merci d'être ici.

Your Excellency, the last part of my love story concerns the old Afrikaans adage that the way to a man’s heart runs through his stomach.

Over the years I’ve been utterly seduced by French cuisine, from the bouchons in Lyon to the butter in Brittany, the foie gras of Pau to the choucroute of Strasbourg, bouillabaisse in Marseille, oysters in Bordeaux, and baguettes and croissants everywhere. I think if Marianne had to choose between a fresh baguette with beurre sale and me, it would be a close call.

And then there’s French cheese. We’ve worked our way through about sixty different types so far and have only about 1 540 to go. That is why I want to keep this speech as short as possible. Time is of the essence.

The internet tells me that every relationship goes through five major stages. The first four are attraction, dating, disappointment and stability, which, I think perfectly fits with my story.

The fifth one is commitment. I cannot help but view this huge honour as the fifth stage of my relationship with France, and the French people. But the story, I hope, will not end here. This is a new beginning of a beautiful phase in the relationship.

Allow me, in conclusion, to say that the cat is no longer on the wall.