Place attachment in town planning: a literature review and proposals for Afrikaans terminology

Place attachment is a concept that has been extensively studied since the 1970s, giving rise to a variety of definitions, depending on the perspective from which it was studied. The various perspectives are rooted in the space versus place debate around people-place relationships. Place attachment has also been studied within various disciplines, each discipline adding a unique view to the concept. This article is specifically written from a town planning point of view.

People-place relationship research is guided by basic assumptions about place or geographical location. On the one side of the fence, human-place relationships are seen as being rooted in the physical characteristics of a space, the result of cognitive and perceptual processes. On the other side, these relationships are social constructions, formed by individual personality traits and life experiences, as well as shared behavioural and cultural processes.

To understand place attachment and how it is formed, one has to understand the difference between space and place.

Space is a neutral medium. It is a region with physical dimensions and it contains objects; it is the physical environment as created by natural forces. Space is perceived through the senses and is different from the individual’s mental interpretation of the space. In other words, space is what is objectively measurable and therefore any geographical location on earth, without the presence of human meaning and symbolisation.

Place is a concept arising from space – it is a space on to which culture and history are engraved. Place can be defined as the physical characteristics of an environment with the meanings associated with it in everyday life. Place is space that has acquired definition and meaning. It is more than physical structure – it is a construction that is meaningful to an individual or group, that carries personal symbolism. Subjective human meanings are therefore cemented on to objective physical structures, turning space into a place.

Place can be seen as the root of human identity. It is central to the understanding of how people turn nature into culture (which in turn has a spatial influence on settlements), into a centre of meaning. Therefore, place is not only a physical manifestation, but an intricate part of what it means to be human – the physical environment cannot be separated from the affective side of being human.

As such, there are as many place meanings as there are individuals and groups that interact or feel a connection with a place. The meanings of places are rooted in their physical setting, objects and activities, and can be expected to change as the physical or social landscape changes.

From the descriptions of space and place one can therefore assume that place attachment, as an expression of people-place relationships, has to do with a definite subjective connection to place. An emotional bond cannot be formed with space – space has to be imbued with some symbolism before it becomes meaningful to the individual or group.

Based on these three place attachment perspectives, an encompassing definition for place attachment is proposed. Place attachment can be defined as both (i) a product or end-state: a multilevel affective person-place bond that evolved from specific place conditions and characteristics of individuals, and the functional and emotional ties that connect places to people and (ii) a process that reflects the behavioural, cognitive and emotional embeddedness individuals experience in their socio-physical environments. Place attachment is thus both a continuous dynamic process and a flexible and adaptive end-state/product.

This article uses Scannell and Gifford's tripartite model to investigate place attachment. Place attachment is important for the town planning discipline in various ways. Town planners can threaten or disrupt people-place relationships through land use changes in an urban area. Disrupting or destroying place attachments can cause feelings of loss, grief, and psychological trauma to those involved. From a town planning perspective, place attachment can help urban planners to understand why individuals express grief and distress – seemingly illogical reactions – in cases of (seemingly logical) proposed land use changes; it can help urban managers to plan and encourage the manner in which the public uses public spaces; it can explain why individuals keep returning to or continue to stay in sub-standard urban conditions that may seem dangerous or unacceptable to outsiders; and it can shed light on individuals' and groups' place-protective or pro-place actions when changes to the environment are proposed or happen.

An ad hoc terminology was created, as it is ideal for translating a discipline's specific technical terms from one language to another. Twenty-one terms from place attachment literature were identified and translated into Afrikaans. The proposed terminology will, however, need to be refined and expanded through future research, especially within the town planning and linguistic disciplines. 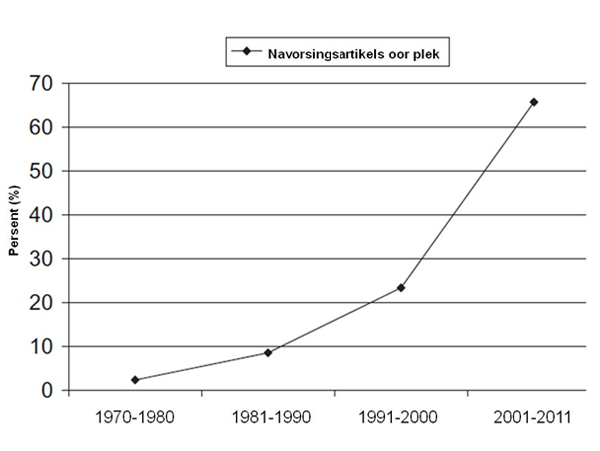 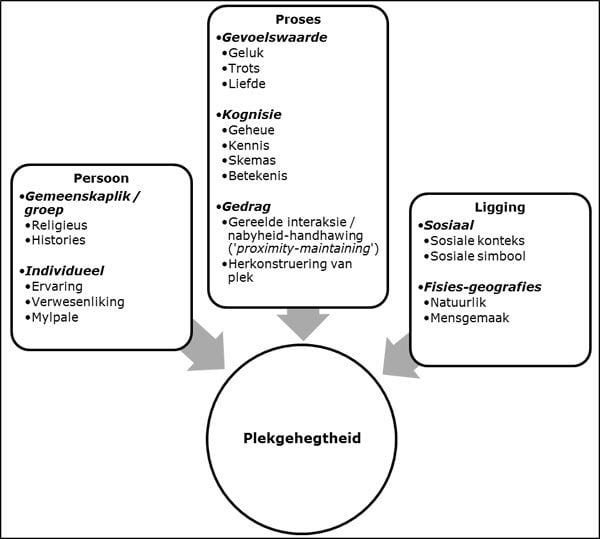 Changes to the land, through policies, laws, or even natural change, will affect [...] groups differently. Oftentimes, identity with a place is a core element in a person’s self-identity. Land use change or proposed land use change, therefore, often meets with heated, emotional resistance, at least from some segment of society. (Beckley 2003:120)

For those seeking to foster participation, tapping into emotional bonds to place can help members of a community articulate and act upon place meaning. Even in communities with entrenched conflicts or negative responses to change, an understanding of place attachments and meanings can provide lessons about what mobilises people, and what feelings about place are at the root of their reaction, which can help move a community toward conflict resolution or even consensus. (Manzo en Perkins 2006:347)

Appleyard, D. 1979. The environment as a social symbol: within a theory of environmental action and perception. Journal of the American Planning Association, 45(2):143–53.

Beckley, T.M. 2003. The relative importance of sociocultural and ecological factors in attachment to place. In Kruger (red.) 2003.

Fullilove, M.T. 1996. Psychiatric implications of displacement: contributions from the psychology of place. American Journal of Psychiatry, 153:1516–23.

—. 2001b. Roots and routes: exploring the relationship between place attachment and mobility. Environment and Behavior, 33:667–87.

Madanipour, A. 1996. Design of urban space: an inquiry into a socio-spatial process. Sussex: Wiley.

Rapoport, A. 1977. Human aspects of urban form: towards a man-environment approach to urban form and design. Oxford: Pergamon Press.

Shumaker, S.A. en R.B. Taylor. 1983. Toward a clarification of people-place relationships: a model of attachment to place. Environmental Psychology: Directions and perspectives, 2:19–25.

Stedman, R.C. 2002. Toward a social psychology of place: predicting behavior from place-based cognitions, attitude, and identity. Environment and Behaviour, 34:561–81.

—. 1977. Space and place: the perspectives of experience. Minneapolis: University of Minnesota Press.

Violich, F. 2000. Towards revealing the sense of place: an intuitive “reading” of four Dalmation towns. In Seamon en Mugerauer (reds.) 2000.