Perceptual skills, concept formation and the executive function of the brain at pre-primary level – an exploratory study

Perceptual skills, concept formation and the executive function of the brain have an important role in the mastering of learning and reading skills (Cartwright 2012; Andrich, Hill and Steenkamp 2015; De Witt and Lessing 2018a). These skills are not inherent to a person and the acquisition of the essential aspects already takes place at preschool stage (Anderson 2002; Kovács and Mehler 2009; Cartwright 2012). Mastering of these skills enhances the possibility for successful reading at entry level of formal schooling (Nicolopoulou 2010; Education and Training 2019) and should therefore be the focus in preschool activities. The role of these skills in a number of activities for preschoolers is reflected in the study. The aim of the research is embedded in the research question: To what extent do our proposed activities for preschoolers enhance the perceptual skills, concept development and the executive function of the brain?

For the purpose of this research perceptual skills are defined as the result of the process of extracting and organising information – giving meaning to what we see or hear. Meaningful reading requires different perceptual skills, including figure background discrimination, perception of form, sequence, analysis, synthesis, association and memory. Meaning of the reading passage is acquired only when the child has acquired the applicable concepts (Andrich, Hill and Steenkamp 2015; De Witt and Lessing 2018a).

We see a concept as a mental representation or building block for knowledge which is used to organise and categorise experience (Bjorklund 2000; Sander 2011; Education and Training 2019). Forming concepts is therefore the result of a system of cognitive organising by means of which characteristic features of previous experience are utilised in recognising new objects (Sander 2011; Charlesworth and Lind 2012; De Witt 2016). This recognition is possible only when the concepts of assimilation, accommodation and retention are mastered. Forming concepts is not only an effective way to organise experiences in the memory, but also serves to identify objects, to form analogues, and to draw conclusions to use as building blocks for more complex skills (Gelman 1998, 2009; Sander 2011). Acquiring perceptual skills and development of concepts already commences with the pre-school child while input from the environment and more in particular educators’ involvement play an important role in the process (Gelman 2009; Charlesworth and Lind 2012).

The questionnaire was compiled to determine:

Some questions were included in the questionnaire for workshop participants for their comments and recommendations.

We further analysed the proposed activities with regard to perceptual skills, concepts and appropriate aspects of the executive function of the brain and presented it to ECD experts in table form. With each of the activities the underlying perceptual skills, the concepts in question and the appropriate executive functions of the brain as viewed by the researchers were indicated. The Delphi technique (Salkind 2012) was used to obtain the view of the ECD specialists. The participating specialists were requested to evaluate our point of view and to provide suggestions for activities with a view to enhancing and refining the three key skills concerned.

Participants were purposefully selected and 19 people completed the questionnaire. Pre-primary teachers that were delegated to attend the workshop were selected to participate in the research. The experts involved in evaluating the Delphi commentary list were selected on the basis of their involvement in the Preprimary Phase as well as on their appropriate qualifications, knowledge and experience in the field. Eight participants assessed the activities, and apart from the teachers, a school principal as well as a university lecturer was included. We adhered to the necessary ethical measures.

Qualitative findings of open questions in the questionnaire did not contribute much to the research. Participants indicated that the most important concepts for children in the Preprimary Phase were covered by the workshop. It was also found that knowledge of the executive function of the brain in concept development was new information for the majority of the participants.

The conclusion we draw as a result of this explorative investigation is that perceptual skills, concept formation and the executive function of the brain can be developed by means of activities. We are convinced that inadequate mastering of reading and learning skills can be ascribed, inter alia, to insufficient stimulation regarding development of concepts and the different aspects of the executive function of the brain. To support such a conviction would require a longitudinal study where reading achievement of children that were subjected to such a purposeful programme at pre-primary level, will be compared with results from a control group. 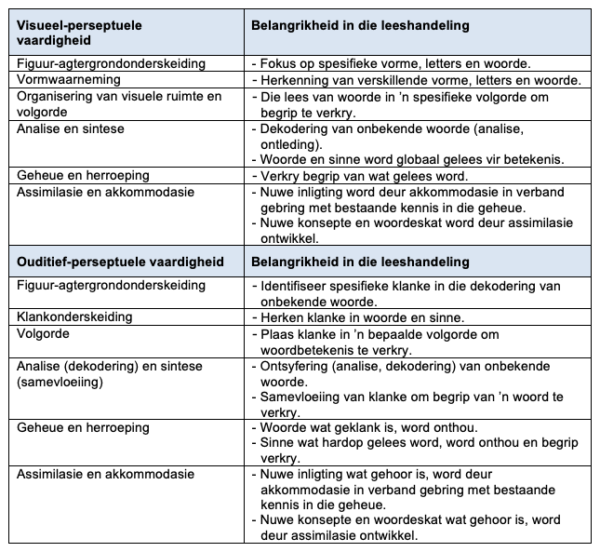 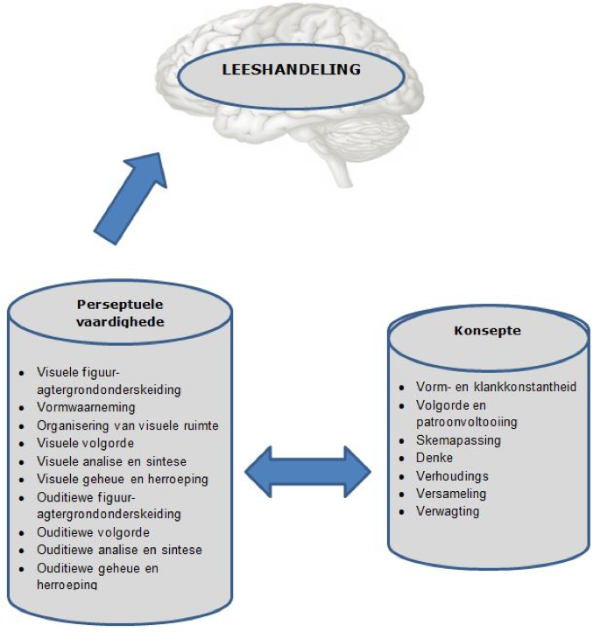 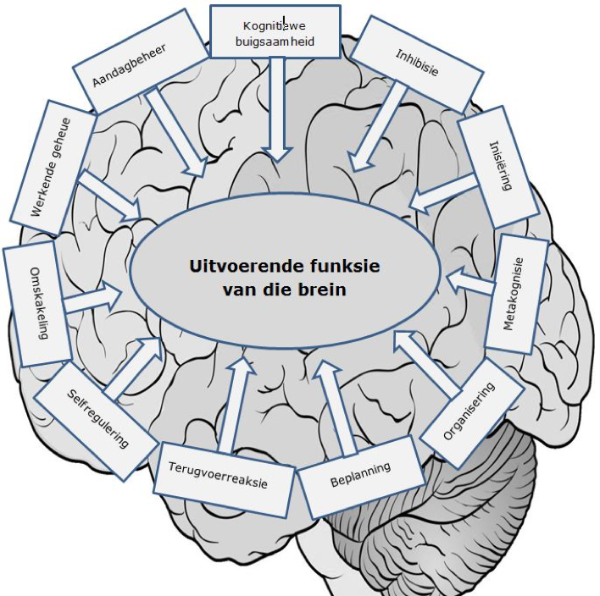 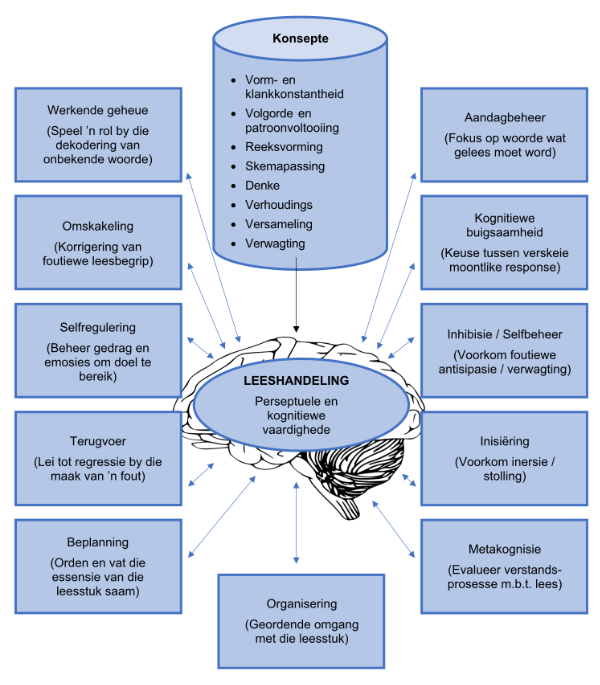 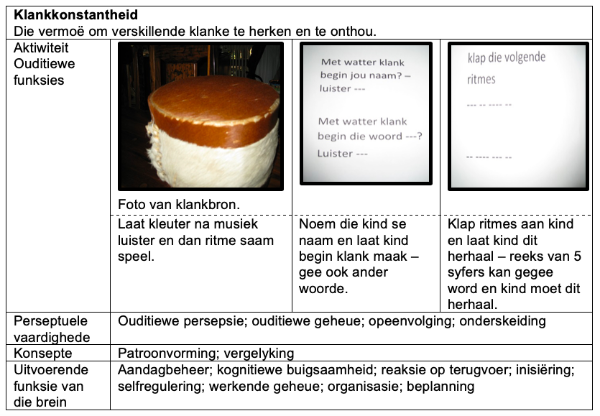 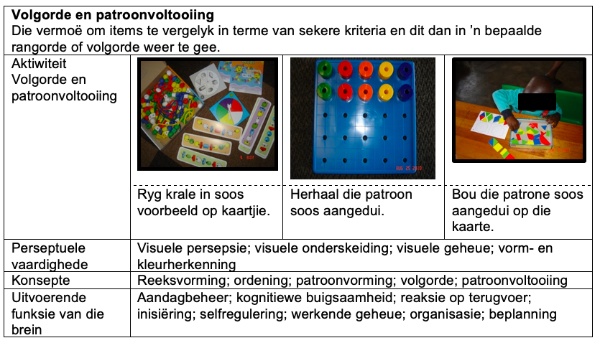 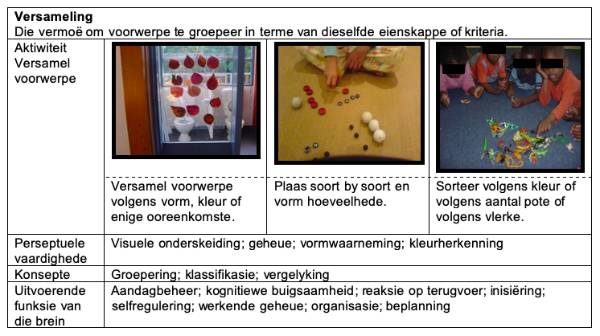 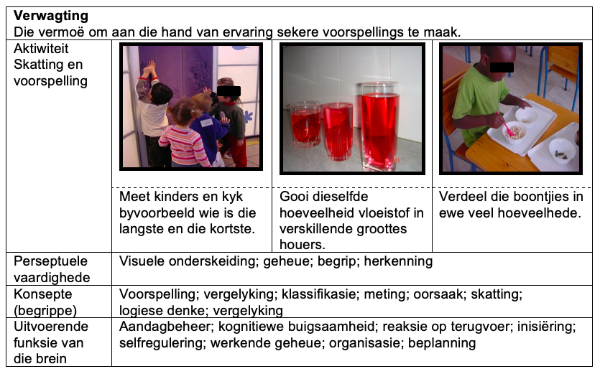 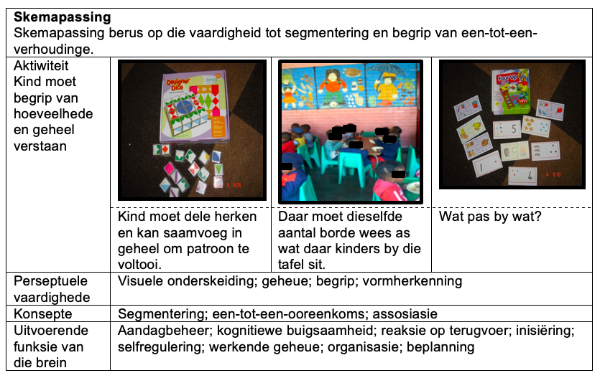 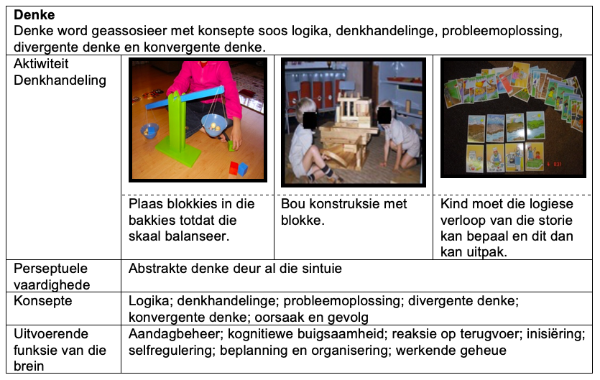 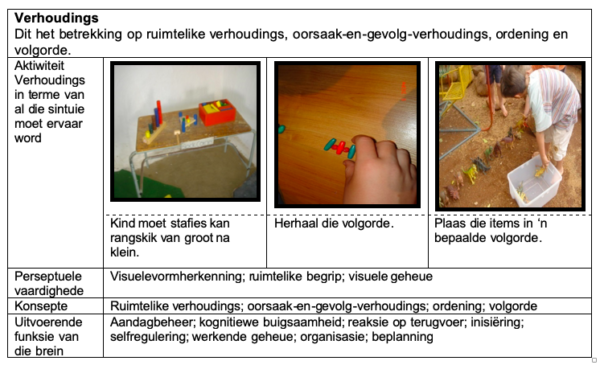 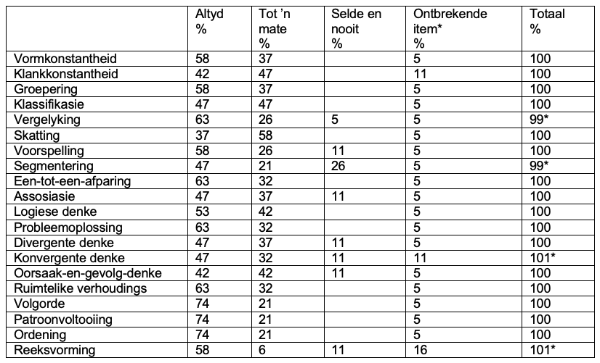 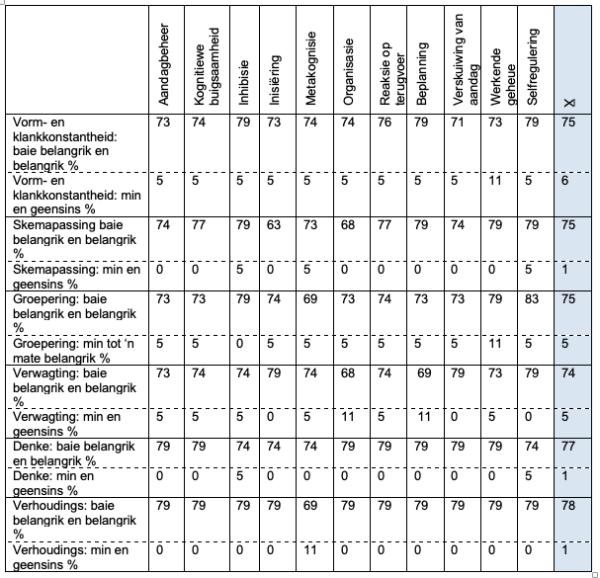 Diamond, A. en D.S. Ling. 2016. Conclusions about interventions, programs, and approaches for improving executive functions that appear justified and those that, despite much hype, do not. Developmental Cognitive Neuroscience, 1:34–48.

Nicolopoulou, A. 2010. The alarming disappearance of play from early childhood education. Human Development, 53:1–4.

Pomerantz, F. en M. Pierce. 2013. “When do we get to read?” Reading instruction and literacy coaching in a “failed” urban elementary school. Reading Improvement, 22:101–15.

Priyadarshi, B., S.P. Goswami en S. Madhuban. 2012. The relationship of auditory and visual perception with reading related skills. Journal of All India Institute of Speech and Hearing (JAIISH), 31:168–76. 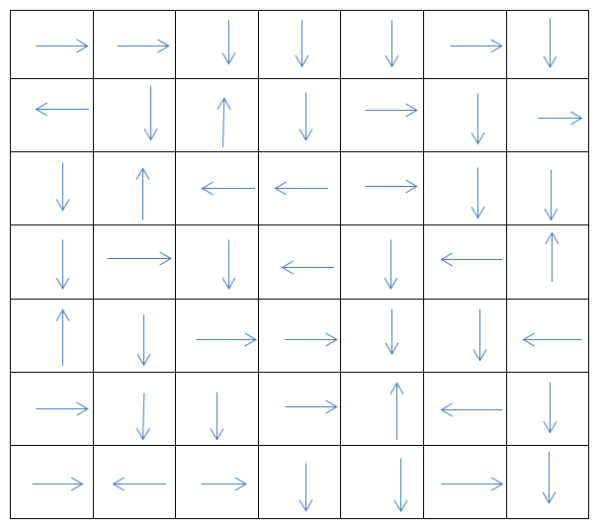