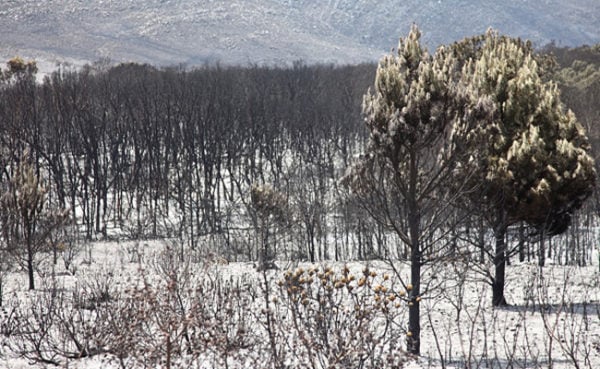 Recent wildfires since the start of this year have caused havoc in the Overberg region, with many homes destroyed and damaged, and thousands of hectares of vegetation burnt.

CapeNature's Executive Director for Biodiversity Support, Ernst Baard, gives some insight on the effect the wildfires have had on the vegetation of the area.

What is the impact of the recent fires in the Overberg region on the fynbos?

Currently, it may be too early to say what damage has been caused by the recent Overberg fires, but suffice to say that, apart from ecological damage to a number of plant species as mentioned above, the fires may have an impact on the water penetration capacity of soils; that means less water entering our dams and higher run-off, causing extensive erosion of the landscape, the accelerated spread of alien invasive plants, physical damage to all-important wetlands that are home to important and wetland animals such as unique frogs and fish, and poorer water quality. Also, the abundance, living space and habitat quality of other animals such as many fynbos and lowland bird species and mammals, like the charismatic leopard, would be affected.

As a result of natural veld being burned out, other animals, such as baboons, may be lured closer to urban areas where food may be more abundant, but in turn bringing them into contact with humans, and creating a risk of higher human-wildlife conflict in urban areas like coastal towns around the Boland and Overberg coastline.

CapeNature remains dedicated to managing and conserving these unique landscapes of the Western Cape for generations to come and is especially dedicated to managing the mountain catchment areas which are so important for water production, and may truly be called the “water factories” of the Boland and Overberg.

How long does it take the fynbos to grow back after a fire?

Because the western part of the Cape Floristic Region (CFR) largely experiences a Mediterranean climate with wet, cold winters and dry hot summers, wildfires are an important ecological process that have shaped the unique plant and animal life of the region during the last five million years. Because it is a fire-driven ecosystem, many animals, and especially plants, are adapted to a life with fire and many plant species in fact need fire to survive, depending on these fires to spread their seed and rejuvenate old, senescent stands of fynbos. Many plant species are adapted to fires that return approximately every 12–15 years, allowing them to flower and set seed and produce young in this period, but other species need up to more than 20 years of no fires to survive successfully.

More recently, the impact of a changing climate worldwide has resulted in lower rainfall and warmer and drier conditions in areas such as the Boland and Overberg regions. The result of this, linked to the invasion of the fynbos mountain catchments by alien invasive plant species like black wattle, pine, hakea and others and increasing fuel loads, has been that wildfires occur more frequently and several plant species, as well as some frogs found in the mountain catchments of the Boland and Overberg, are showing signs of not being able to deal with these shortened fire intervals.

The realistic concern is that several plant species that rely on long fire intervals may suffer ecological damage and as a result may go extinct purely because they cannot deal with short intervals by producing enough seed and having time for young plants to grow to maturity to flower and produce seeds themselves.

Why is fynbos so special?

We live and work in a very special place. The plants and animals that grow and live in the region between the Cederberg in the north, through the Boland and Overberg and Garden Route in the south to the Baviaanskloof in the east, are unique; seven out of every 10 plants do not grow anywhere else on earth. The outstanding diversity, density and endemism (occurring nowhere else) of the plants of this region are among the highest worldwide. This is why it is called the Cape Floristic Region, qualifying it as one of the World’s six floristic regions.

The CFR, and especially the fynbos biome within it, (a) is one of the richest areas for plants when compared with any similar-sized area in the world; (b) is the only floristic region that occurs within one country; and (c) is home to nearly 20% of the continent’s flora, although it represents less than 0,5% of the area of continental Africa.