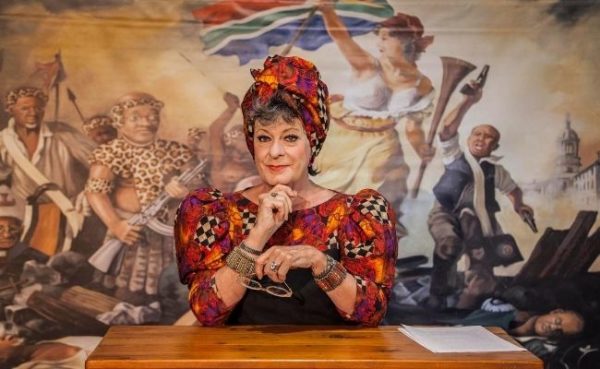 To be masked or not to be masked? That is the question. A famous story from the past is The Man in the Iron Mask. A familiar reality today is a world in a cloth mask. And on 9 August the most famous white woman in South Africa will expose herself with and without masks!

Evita Bezuidenhout has been part of the South African political landscape since 1981. Among the many masks she successfully wore were those as a member of the National Party, as an ambassador in the SA Diplomatic Corps, as a loving wife, a doting mother, a glamerous grandmother and a commited comrade. Now in her mid-eighties, she is still a farce to be reckoned with.

Pieter-Dirk Uys has been impersonating her for years and as a result is used to wearing her face as his mask. And yet, he too will be unmasked on Woman’s Day, when he will present the legend of Evita Bezuidenhout, donning various masks to create the icons and aikonas that treated Mrs Bezuidenhout with the respect she deserved. Just because she doesn’t exist, doesn't mean she’s not real.

Unmasking Evita will live-stream from Penny Lane Studios in Cape Town across the world into the homes and hearts of her subjects on Women’s Day this Sunday 9 August at 6pm via https://qkt.io/pieter-dirk-uys-presents-unmasking-evita. Much to laugh at, more to remember and lots to look forward to. Tickets cost R70 each. Book for Pieter-Dirk Uys and his satirical cluster on Sunday 9 August at 18h00. And Tannie Evita will also be there. Unmasked!