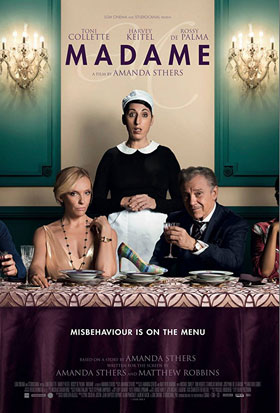 Anne and Bob (Toni Collette and Harvey Keitel), a well-to-do American couple, have just moved to a beautiful manor house in romantic Paris. To impress their sophisticated friends, they decide to host a lavish dinner party, but must disguise their maid (Rossy de Palma) as a noblewoman to even out the number of guests. When the maid runs off with a wealthy guest, Anne chases her around Paris to thwart the joyous and unexpected love affair.

This is not Pretty woman. The rich will not overcome their snobbery and bigotry. The poor and destitute will not overcome everything in the name of love. Yet, Madame has one of the happiest endings I have seen on film. It is just not the ending you expect.

The trailer certainly creates the illusion that this film is a light-hearted comedy. Even though there is bitingly funny dialogue running throughout the film, the strength of Madame lies not in its humour, but in the brutal moments where Anne threatens and blackmails and attempts to decimate Maria the maid. Toni Collette has never been more vile or derisive. You feel only contempt for her, even though it is clear she is also trapped in a lonely, loveless life. (The scene in the pool where a naked Collette stands and watches her lover leave is quietly powerful.) She outshines everyone, even Rossy de Palma, who delivers a beautiful performance of a proud woman trapped by circumstances.

The film does not ever go where you expect it to. It does not adhere to the tried and tested and tired Hollywood movie formula. It follows flawed, mostly unlikeable characters as they make a mess of things. It rarely lets go of the discomfort it makes you feel. There is little redemption, except for Maria, but, once again, it is not the kind of redemption you are used to or that you would want for her. It is fabulous.

If you want a frilly romcom with pretty young things where love conquers all, go watch something else. Madame will be wasted on you.