Lecture podcasts in English and Afrikaans: A more inclusive strategy

The recording of lectures (in this article referred to as podcasts) are increasingly being used in higher education. Podcasts in education are generally defined as the recording of lectures, tutorials and learning materials in either audio or video format. The recordings are then made available asynchronously, and students can play these on various electronic devices. Research is showing that using podcasts or lecture recordings as a learning resource can improve the learning experience of students if/when they use it to supplement learning. Furthermore, De Villiers and Walsh (2015) mention that this is a necessary service to support learning and should be an essential component of a university’s teaching and learning strategy.

The Faculty of Medicine and Health Sciences (FMHS) at Stellenbosch University (SU) uses podcasts to supplement formal teaching in the undergraduate programmes to enrich students’ learning experience. According to De Villiers and Walsh (2015) students make use of these podcasts to study; to better understand ambiguous concepts; to catch up on missed work; and to help them prepare for tests and exams. Interestingly, not many students use the podcasts to replace lectures as they still prefer to be in class. Podcasts, therefore, serve mainly as a source of further support for the students.

Given the University’s stated motive for inclusivity, the FMHS was challenged in 2015 to find a way to incorporate both English and Afrikaans as a medium of instruction. As a result, a task team was established to explore possibilities as to how Afrikaans could be included in the most effective way possible. The task team looked at various options, such as parallel-medium teaching, code-switching and interpreting. Presenting classes in both languages or making use of code-switching during class was considered too complicated and time-consuming. Furthermore, parallel-medium teaching was considered impractical as it was both time-consuming and costly.

Therefore, an innovative way to accommodate both language groups needed to be explored. The decision was made to trial making podcasts of lectures in both English and Afrikaans as the infrastructure to record the English lectures was already in place. Afrikaans students attend classes taught in English but can use the Afrikaans podcasts afterwards in their own time as a learning resource. They can use this to clarify those complicated concepts that they struggled with during class and to learn subject-specific terminology. Students are also able to compare the English and Afrikaans podcasts to clarify their understanding while also improving their linguistic abilities. The provision of the podcasts gives students more control over their own learning experience, thereby reducing learning stress and anxiety.

The Afrikaans podcasting project was built on the back of the existing lecture-recording (podcasting) project. A task team comprising several role players was established. The task team decided to select the Chemistry module for first-year students as a pilot study, and the project began at the start of the academic year in 2016. The project management and research were carried out by the Head of the Unit for Learning Technologies.

It was decided to work with an interpreter who would be present in class and who would translate the presented Chemistry lectures into Afrikaans. The interpreter received the lecture material in advance so that he/she could prepare. During lectures, the interpreter sat in front and used the whisper method to interpret (Pienaar 2006) so as not to disturb the students in the class. The interpreted speech was recorded with a digital voice recorder and a mobile phone to make sure the sessions were recorded. At the same time, the English lectures were being recorded in the standard way using TechSmith Relay. The lecturer’s voice was recorded alongside the PowerPoint slides he or she was presenting. The English recordings were automatically sent to a technical assistant who edited them while the interpreter would deliver the recordings on a USB drive or via email.

Once the English recordings were processed, the assistant replaced the English track with the Afrikaans recording. It was then edited to make sure that the synchronisation between the voice and presentation slides is correct. Students then accessed the podcasts through the faculty website and could download or listen to it online. A complete explanation of this process is given by Walsh and De Villiers (2015). Figure 1 provides a visual representation of the process. Students were informed of the project beforehand and during lectures. Emails were sent with guidance employing screenshots on how to access the Afrikaans podcasts.

The researchers used a nested mixed-method approach where the qualitative and quantitative data were collected simultaneously. The primary data is qualitative, and the nested data is quantitative – observing user behaviour through Google Analytics. The entire group of students (487 students) was asked to participate in the study and to complete the survey. However, only Afrikaans-speaking students (152 students) were expected to participate. The study was submitted to the FMHS Ethics Committee and to the SU Institutional Research Committee for consideration, and was approved. The study was considered a low-risk study, and the ethics number assigned to the study was S12/01/022. Qualitative feedback was obtained through a survey with open-ended questions as well as some Likert scale questions. Quantitative data was collected using Google Analytics to track students’ viewing behaviour.

From the data analysis it can be inferred that, in an ideal world, students would prefer instruction in their home or first language but, as students indicated, since most learning resources, such as textbooks, YouTube videos, journal articles and websites are in English, it involved more work to study in Afrikaans.

The study has shown, however, that creating podcasts in Afrikaans is not a necessity for students at the FMHS, since students realised that they needed to make a switch from Afrikaans to English to be successful in their studies. The research is inconclusive on whether it is a needed resource as students have indicated that it enhances their learning experience.

In their first year, students need to acclimatise to the university environment. They need to learn subject-specific terminology and a whole range of new concepts in a second, or sometimes a third, language. Therefore, podcasting in Afrikaans or any other additional language can serve as a scaffold to support students while they adapt to their new environment and develop the confidence and competence to make the transition to learning in English. It can, therefore, be useful to record students’ first-semester subjects in their home language. It could be useful especially for at-risk students or students who are not as confident in learning in English. Using this approach to create podcasts in Afrikaans, Xhosa, Zulu and Sotho can serve as a possible solution to promote multilingualism. The study can also be replicated for different faculties, as well as for supporting different languages. A final consideration could be to see whether this learning resource has a positive impact on student performance and attrition.

The preference for English as medium of instruction seems to be largely based on the perception of the importance of English to “succeed” in life and work rather than the actual dominant use of English by a majority of the population.

My lesings is in Engels. 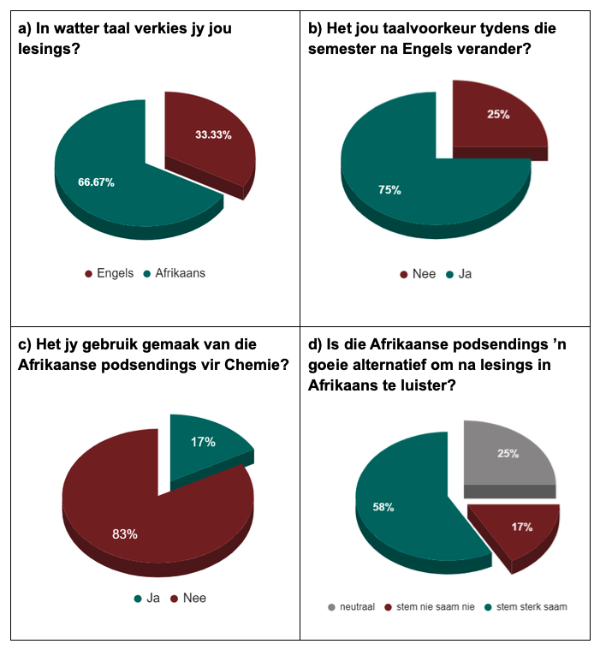 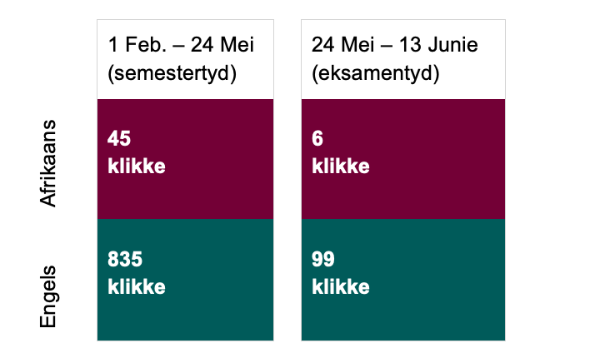 I think it was easier to study in English because I could use online resources like Khan Academy on YouTube but it was very difficult to adapt after doing chemistry in Afrikaans (student A).

I am finding that this semester is easier to study in English because I'm starting to think in English. I'm glad that I made the switch in the first semester when the workload was less (student B).

Brooks, C., C.D. Epp, G. Logan en J. Greer. 2011. The who, what, when, and why of lecture capture. Proceedings of the 1st International Conference on Learning Analytics and Knowledge, ble. 86–92.

Hall, G. en A. Ivaldi. 2017. A qualitative approach to understanding the role of lecture capture in student learning experiences. Technology, Pedagogy and Education, 26(4):383–94.

Paxton, M.I.J. 2009. “It’s easy to learn when you using your home language but with English you need to start learning language before you get to the concept”: Bilingual concept development in an English medium university in South Africa. Journal of Multilingual and Multicultural Development, 30(4):345–59.