The digital revolution created a cyberworld in which especially people in more affluent countries on all continents have access to news. Through interactive news websites and social media platforms such as Facebook and Twitter the general public can now voice their opinions and generate news. Newspapers’ declining circulation figures have led to smaller newsrooms where a handful of journalists often, at greater speeds, have to produce news for online platforms while catering to the expectations of increasingly involved audiences and maintaining high-quality output.

This qualitative exploratory study focused on the challenges journalists in satellite offices of mainstream dailies in South Africa face while managing a technologically strenuous environment. Satellite journalists offer an excellent research opportunity because they mostly work independently from head office and often act as their own news editors. Their tasks are comprehensive, including as they do every aspect of news management, unlike the situation at head office, where the news editor is mainly responsible for managing the daily news budget. Satellite journalists therefore do not only have to have news management skills to ensure quality reporting, but also have to be excellent in the practical application of journalistic tasks.

The research question relevant in this article was: How should satellite journalists manage their environments to ensure quality journalistic outputs?

To answer this question the researchers aimed to determine which processes the satellite journalists of selected South African daily newspapers should implement to manage the quality of news output within the daily challenges in their organisations as well as the broader environment in which they work. The study further endeavoured to identify patterns in the subjective work methods of individual journalists to formulate practical guidelines for the process-based management of a satellite office that could promote effective and efficient management without compromising quality. Note that the aim was not to evaluate the quality of journalistic output. The researchers worked on the assumption that quality should be an outcome if certain processes and guidelines are followed.

The combination of skills and tasks was investigated within the framework of systems theory by analysing the management challenges and functional tasks of journalists in satellite offices following a systems-and-process-based approach. A systems-and-process-based approach is particularly suitable to investigate media management. The approach recognises the relationship between the news organisation and the external environments, and identifies and investigates all the components that influence one another in the process of generating the outcome (i.e. quality news). The systems theory was therefore also relevant in this study about the processes in a satellite office. These offices function in the bigger system of their respective news organisations, as well as in the bigger societal context in which the newspapers and their websites operate. Diverse aspects linked to the daily working methods of satellite journalists within the context of the systems theory were identified by means of an intensive literature study. Further investigation involved using questionnaires and follow-up telephonic/e-mail interviews with participants to identify the relevant processes followed in managing a satellite office.

Two semi-structured, qualitative questionnaires with a total of 84 questions were compiled to gather data about the complex working methods of satellite journalists. The aim was to test/verify the theory about the elements and components necessary to ensure quality reporting and to identify similarities and differences between theory and practice. The researchers first identified five core tasks from the general literature, the key performance areas applicable to satellite journalists at the media conglomerate Media24, as well as preliminary interviews with selected participants. These core tasks (used as concepts and constructs in the data analysis) are self-management, creating a contact list, news generation, writing news, and sustained communication with the news editor. Guided by the theoretical assumption that processes are conducted within a system to reach specific goals, and that the processes consist of inputs transformed into specific outputs, the researchers subsequently identified the processes and sub-processes of the core tasks. The inputs were identified in the literature study and include resources, the individual and the environment. The questionnaire thus included questions about determining and reaching goals, planning, productivity, perspective and personality. Concerning the work environment, questions concentrated on demographic information, the economy, politics and the environment. The data was analysed using the concepts and constructs (tasks) identified and formulated. The researchers verified the theory in general, but added several processes/principles that the satellite journalists implement in practice.

In general, the researchers found that participants seem to pay attention to all aspects necessary for efficient management, but often fail to execute these effectively.

Under self-management, the researchers explored the processes satellite journalists should follow to deliver quality outputs (i.e. the news product). Aspects such as prioritising, planning, productivity, perspective and personality were investigated. The findings show that personal and professional goals are often intertwined, which could lead to burnout. Participants do reach news deadlines, but lack time-management capabilities and have trouble prioritising. Planning, which is part of the transformation phase in the self-management process, involves the amount of time spent on planning, method of prioritising (according to news values); allotting time to tasks. Participants tend to write about news where information is more readily available, e.g. on social media platforms. Most time is spent on news gathering (as a core task of a satellite journalist). Deficiencies identified include a lack of consultation with the news editor to help with planning and prioritising, and little pre-planning. This increases work stress and the ability to manage time effectively.

The management of production aspects forms part of the transformation phase in the process of self-management. Responses show that interruptions frustrate participants, but in general they are able to manage this through reprioritising, postponing or delegating. Participants are able to distinguish between relevant methods of communication and apply these effectively. Deficiencies include effective office administration due to time and work pressures. Participants feel overwhelmed due to the volume of work resulting from the often large geographic areas they are expected to cover. They do know what standard of work is expected and when they do or don’t reach the standards, but most were vague in their responses about how to improve. Findings show that participants can control planning and prioritising, and the extent to which they are informed about what is happening in the environment. They rely on previous experience, but seldom ask for advice from the news editor. Although participants are assertive to a lesser or greater extent, they struggle with saying no, and look for validation from others.

Where compiling a contact list is concerned, all participants recognise the importance of this core task, and have extensive contact lists and keep these up to date. Most use cell phones and computers to store the information. The researchers found that participants rely heavily on traditional official news sources, but supplement by, e.g., using social media. News gathering takes place reactively, meaning that participants rely on what other media report on, and search for stories on social media platforms. Less than half the participants find unique stories by observing what is happening in their environment and paying attention to what people are talking about. Few also attend functions with the aim of finding unique stories. This indicates that exclusivity has become less important when it comes to news generation.

News gathering starts where the process of news selection ends. Other inputs necessary for news gathering include physical resources such as a vehicle, computer and camera, and video equipment. The researchers found that participants have adequate equipment, and still use traditional methods to gather news, supplemented by new methods such as social media. All participants use technology, especially to gather visual material for stories. When writing stories, participants use different methods to structure information, and apply various story formats to the story type and platform. However, time constraints due to the 24/7 news cycle influence the extent to which stories are rewritten and polished, which has an influence on the quality of news output.

Communication, especially with line managers, was identified as a problem area. Sustained communication with the news editor helps journalists to set goals, plan and re-evaluate the news process. Questions related to the frequency and nature of communication. Most participants indicated that they talk to news editors about the news budget, prioritising and developments regarding stories. Most make independent decisions about visual elements and which stories will be offered for which platforms. Stumbling blocks include a lack of time to discuss content and story angles, which could also influence quality.

Another concern is a lack of solid knowledge/understanding regarding the geographical environment within which satellite journalists function. This includes demographic, political, economic and social knowledge and understanding. Most participants are well-informed about race and language in their communities, have reasonable knowledge of economic aspects such as income level and unemployment, but only superficial knowledge of aspects such as age and access to services. None of the participants had constructed an environmental profile of their regions and wider audience. They do, however, agree with the literature that audience needs and expectations have to be taken into account when taking news decisions. However, scant knowledge of the environment will have a negative influence on journalists’ ability to meet the needs and expectations effectively. 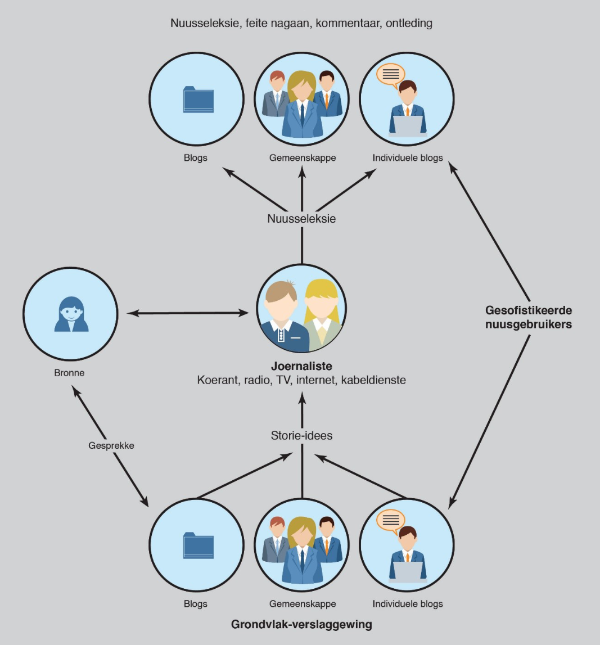 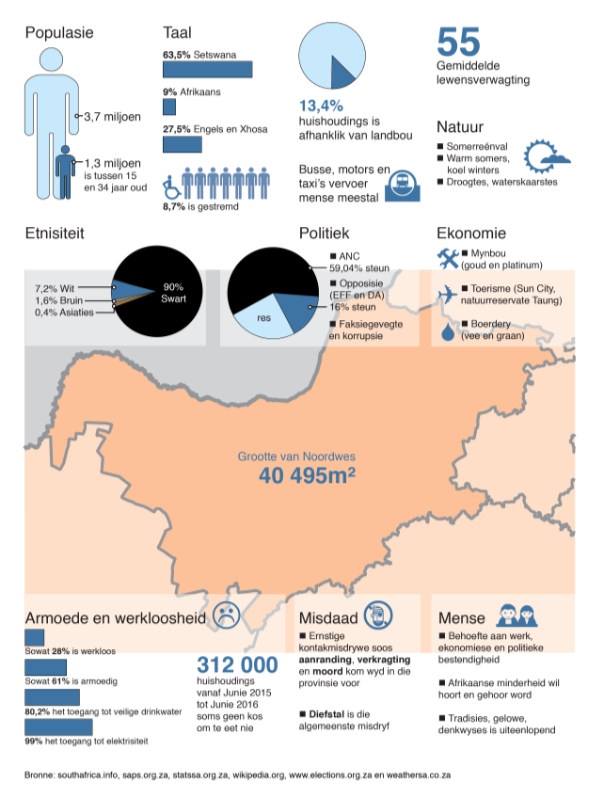 Botma, G.J. 2016: Cultural citizenship in the digital future(s): In search of a new code of praxis for South African journalism education and training. Critical Arts, 30(1):102–6.

Deuze, M. 2005. What is journalism? Professional identity and ideology of journalists reconsidered. Journalism, 6(4):442–64.

McNair, B. 2013. Trust, truth and objectivity: Sustaining quality journalism in the era of the content generating user. In Broersma en Peters (reds.) 2013.

Nowotny, H. 2005. The increase of complexity and its reduction: Emergent interfaces between the natural sciences, humanities and social sciences. Theory, Culture & Society, 22(5):15–31.

Raffoni, M. 2005. Fundamental strategies for managing your time. Be sure you're spending your time in the right places. Harvard Business School.