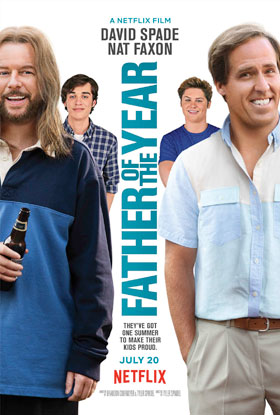 When a drunken debate between two recent college graduates about whose father would win in a fight is taken seriously by their idiot dads, jobs are lost, relationships ruined and futures destroyed, and best friends come of age as they come to grips with who their fathers really are.

Why Netflix invested money in this objectionable film, no one knows. The first red flag is the production company, Happy Madison Productions, Adam Sandler’s company. The other films he has produced for Netflix include The do-over (5%), The ridiculous 6 (0%) and Sandy Wexler (29%). Need I say more?

The second red flag is David Spade. When last was he funny? When last did he make a good movie? His profile on Rotten Tomatoes is a long list of rotten green tomatoes, with Father of the Year scoring a whole 0%. Why is he still making movies? Why is he still being paid to do so? He basically has one character he plays in all his films: revolting, ageing redneck with a mullet, a drinking habit and a penchant for lame, vile jokes.

The film is abhorrent. The jokes around young children being found sexually attractive, and Spade’s instant boobs due to an allergic reaction, are especially repugnant. I could stomach a whole 40 minutes of it before feeling physically ill.

Avoid at all costs.