From the earliest days of #RhodesMustFall to the more recent #FeesMustFall protests, social media have been flooded with bewildered, middle-class onlookers unable to understand why the students can’t be more restrained in their protests. It started with Chumani Maxwele smearing faeces on the statue of Cecil John Rhodes at UCT. Commenters were instantly outraged at the form his protest had taken, as though this scatological response were somehow inappropriate as a response to the large-scale crime against humanity that was colonialism. 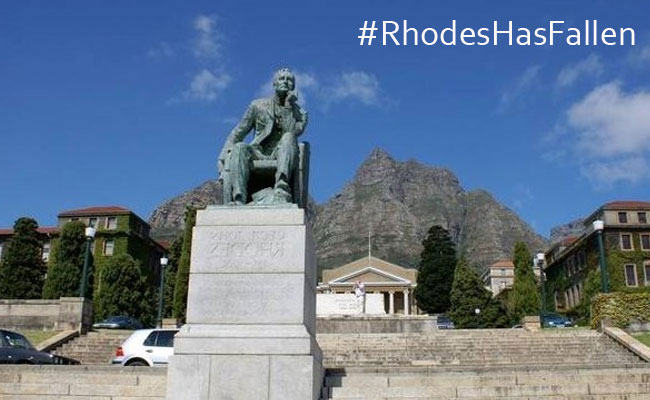 After months of sustained protest the statue of Rhodes was finally removed from the campus. Many expected that the students would be happy now. After all, they had achieved what they had set out to achieve. Rhodes had been toppled. There was a collective sense of indignation when the protests continued and the students declared their intention to decolonise tertiary education as a whole. The toppling of the Rhodes statue was merely a symbolic beginning for them.

Then an across-the-board increase in university fees of around 10% was announced and students took to the streets again. Already staggering under the weight of debt and the threat of financial exclusion, they demanded a zero percent increase for 2016. 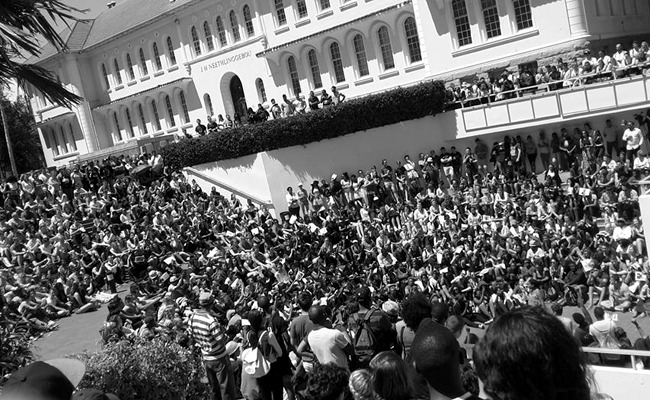 #feesmustfall protest at the University of Stellenbosch (Photo: Naomi Bruwer)

Once again, every action they took was deemed to be excessive and unnecessary. Whether it was blocking the flow of traffic, disrupting lectures or boycotting exams, it was all wrong. Then certain universities invited the police and armed security guards on to campus and the situation deteriorated predictably. In response to the water canons, rubber bullets, and beatings from the police, levels of violence escalated.

Now the calls for students to moderate their actions really got underway. An older generation of activists even offered to give the students lessons in how to protest without violence. Apparently, the students should just have asked nicely for an end to financial exclusion.

Literature is one of the most gentlemanly ways of “asking nicely”

To many, the student protests appeared to have come out of nowhere. Very little had been heard about student poverty, hunger, and homelessness. It was easy to believe the problem didn’t exist at all before 2015. This just goes to show how invisible you become when you “ask nicely”. Because students had been asking nicely for years and had been summarily ignored.

Literature is one of the most gentlemanly ways of asking nicely. Student grievances have been the subject of some of the best post-apartheid novels. These are not books that appeared briefly in print, sold a few hundred copies and disappeared without trace. They have been prescribed for school and university, reprinted many times, and translated into different languages. All are still in print today. 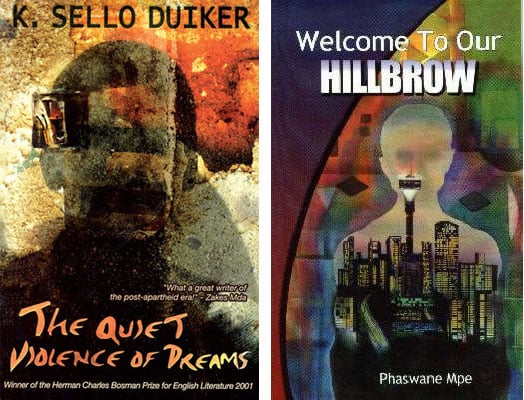 2001 saw the appearance of K Sello Duiker’s The quiet violence of dreams and Phaswane Mpe’s Welcome to our Hillbrow. Duiker’s protagonist, Tshepo, is one of the earliest and most iconic disaffected students to appear in post-apartheid fiction. He struggles to negotiate his privileged surroundings while attempting to make sense of a traumatic past in a violent country. The neo-colonial institution of Rhodes University can offer him no solace and he soon finds himself at a far more rigid institution – the Valkenberg mental facility.

Welcome to our Hillbrow is one of the first examples of a particular kind of episodic narrative that characterises much black post-apartheid fiction. The story resembles a series of thematically linked short stories rather than a single linear narrative. This mode of storytelling has come under fire from white critics, who have described it as incoherent and lacking in careful editing. Another way of looking at it is that it represents a successful attempt to decolonise black literature from the imperative of Western linear narrative. The beating heart of Mpe’s novel is Hillbrow itself, but several of his characters have been chewed up and spat out by tertiary institutions both in South Africa and abroad. Academia is depicted as a hostile place – one in which black South Africans struggle to feel at home. Economic insecurity stalks these characters throughout their lives. 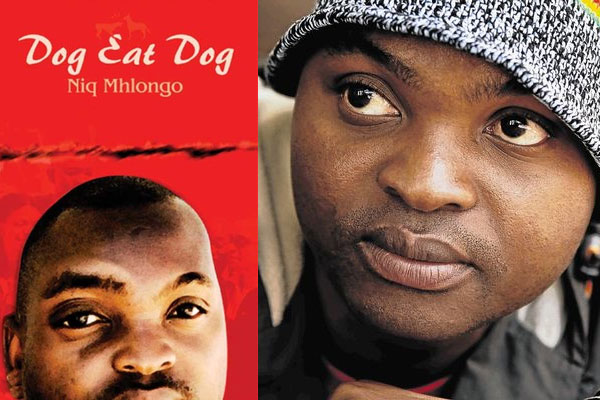 2004 was enlivened by the publication of Niq Mhlongo’s Dog eat dog. Based on Mhlongo’s own experiences as a student at Wits University and UCT, Dog eat dog follows the escapades of Dingz, a student who is constantly in danger of losing his place at university. Mhlongo has spoken publicly about his own experiences of being homeless at UCT – of trying to find an open building to sleep in at night on campus, and of battling constant hunger. The cheerful and irrepressible Dingz is at least 50 percent responsible for the various misfortunes that befall him, but it’s a dog eat dog world out there and he learns to negotiate it with good humour and a sprinkling of trickery. Perhaps the biggest dog of all is the university, which threatens to expel him until he learns to play it at its own game by self-consciously pulling out the “race card” to persuade the bursar to part with more scholarship money. 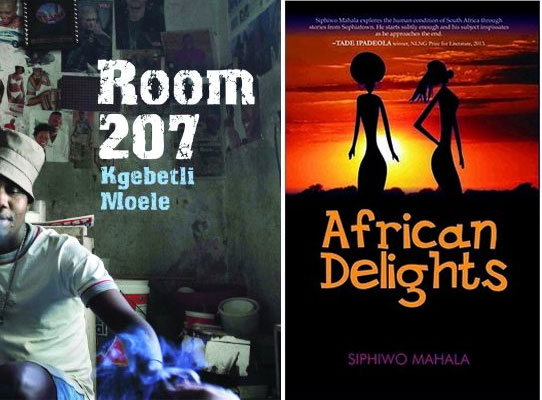 Room 207 by Kgebetli Moeli appeared in 2006. It is also set in Hillbrow and tells the loosely interlinked stories of six young men who have been rejected one way or another by the University of the Witwatersrand. From time to time they all inhabit room 207, and have learned the hard lesson that intellectual accomplishment and hard work are not enough to get you through university when you are poor and black in South Africa. Financial exclusion is the bugbear that kept most of them from following their dream of getting a tertiary education. From that moment on their lives spiral out of control as they fall victim to the many other challenges of this hostile urban landscape.

Siphiwo Mahala brought out African delights in 2011. The ironic title encapsulates various cycles of thematically linked short stories. One of the most compelling is “Hunger”, which opens memorably with these lines:

My stomach growled again. I turned to face the other side. I lay in a foetal position, pulling my knees up to my torso to suppress the pangs of hunger. They subsided for a while. Then there was a heavy traffic of wind-balls running up and down my stomach. I pressed my hand against my abdomen and released wind. The air filled with the smell of rotten eggs. I felt empty, nauseous and hungrier than before.

The protagonist, Sipho Mayekiso, is desperately trying to scrape up the funds to be admitted to Fort Hare University. He strikes up a relationship with a Danish girl, Kate, who works in the bursar’s office. But despite mutual liking and attraction they are unable to sustain a relationship due to her fundamental lack of ability to understand Sipho’s background and circumstances. He is nothing more than another tourist attraction for her to tick off on her list. It takes a shared cultural connection between Sipho’s grandmother and the registrar for the money to be forthcoming for him to pursue his studies. At the end of the story his grandmother optimistically declares, “Hunger is gone!” But everything that has gone before throws doubt on this statement. Hunger is not gone. It is merely in abeyance. 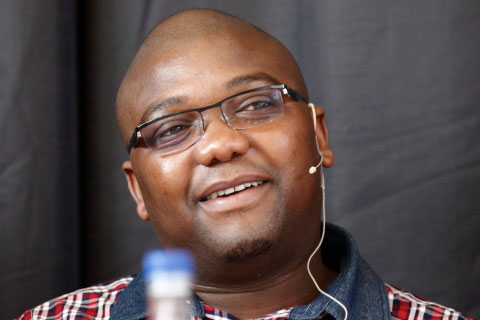 Most recently, in 2014, Thando Mgqolozana brought out his third novel, Unimportance. Hailed by his fellow writers as possibly the most important talent of his generation, Mgqolozana tackles the student crisis head-on. In inhabiting the persona of Zizi, who is the favourite to win an election for SRC president, Mgqolozana reveals an intimate knowledge of student politics and student grievances. On one level the novel functions as an allegory for party politics all over the world. But it is also tenderly, even lovingly, specific to South African students in the 21st century.

Mgqolozana has written and spoken about his own experiences as a student at the University of the Western Cape fighting to assist his fellow students in getting their registration fees reduced, and pulling every string possible to ward off financial exclusion. It is impossible to read Unimportance and remain unmoved or unaware of the plight of students in this country.

And yet this book and all its predecessors sparked no revolution, brought down no statues, and caused no fee increases to fall. Asking nicely – sadly enough – accomplished nothing.

So while these texts remain a seminal part of post-apartheid literature, and should be read by every student interested in fallism, it is the students themselves who have begun the process of decolonising our universities. And it is they who will see this project through to the end. The time for asking nicely is over. The future of tertiary education in South Africa lies in the hands of these young revolutionaries whom Mgqolozana has dubbed the “Beautiful ones”.