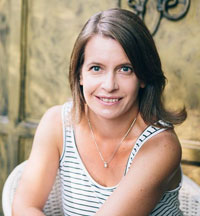 Fiona Snyckers is the author of the Trinity series of novels and the Sisterz series of mobile novels. She lives in Johannesburg.

An interview with Fiona Snyckers

"Most of my books deal with issues that affect women, and it’s hard to rank these in terms of importance."

Lacuna: an interview with Fiona Snyckers

"It is about a woman by the name of Lucy Lurie (clearly inspired by Coetzee’s character of the same name), who is trying to recover from a gang rape. What makes her situation more unbearable is that a male writer, John Coetzee, has written a bestselling book about her experience. She feels as though it was her story to tell."

"We all want our books to sell well and to reach the widest possible audience. Being invited to Franschhoek is an invaluable leg-up for any writer’s career. May the festival continue to go from strength to strength."

Student protests and books to protest by

"Student grievances have been the subject of some of the best post-apartheid novels. These are not books that appeared briefly in print, sold a few hundred copies and disappeared without trace. They have been prescribed for school and university, reprinted many times, and translated into different languages."

Fiona Snyckers 2015-01-12 "This is not to suggest that there is anything wrong with honouring the Charlie Hebdo dead, merely that our indifference to the deaths of people of colour in war-torn zones is shameful and needs to be challenged. No corpses are more sacred than others."