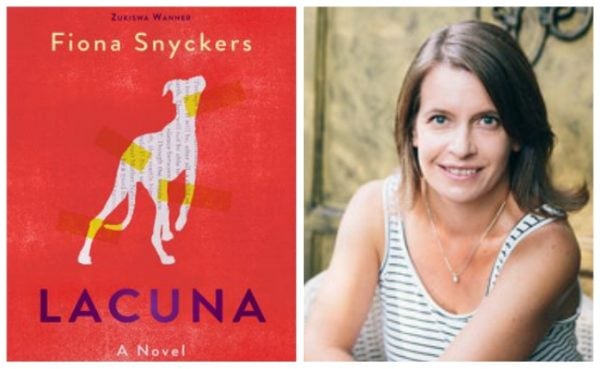 Fiona, congratulations on Lacuna. There are plenty of references to Disgrace: the author JM Coetzee, the dog on the cover, the references to rape. What is the story about?

It is about a woman by the name of Lucy Lurie (clearly inspired by Coetzee’s character of the same name), who is trying to recover from a gang rape. What makes her situation more unbearable is that a male writer, John Coetzee, has written a bestselling book about her experience. She feels as though it was her story to tell. She begins to fixate all her anger and resentment on him.

On the back of the book, I read: “Her rape is not a metaphor. This is her story.” Please elaborate.

In Disgrace, JM Coetzee uses the rape of Lucy Lurie as a kind of metaphor or allegory for the process whereby black people took South Africa back from white rule. I have two problems with this. On one hand, I believe that rape should only be used as a metaphor sparingly, if at all. And, on the other, the metaphor doesn’t work. White people in South Africa are not objects of pity. They are flourishing now, more than ever before. The transfer of power happened in the most gracious and forgiving way possible. It is not in any way analogous to a gang rape.

What inspired you to write the story?

Disgrace has bothered me for the last 20 years – ever since I first read it in 1999. I felt as though the portrayal of Lucy Lurie was more akin to a male fantasy than to a real woman. It seemed unlikely that any woman would be so acquiescent in the face of sexual assault – and so willing to take the sins of her forefathers upon her own flesh. She refuses to name her assailants. She decides to keep the child that has resulted from the rape. And she invites her attackers to come and live with her, so they can all farm the land together. It’s a neat fantasy, but one that bears little resemblance to reality.

Do you think the female perspective (versus the male perspective) is often perceived as angry, over-emotional and hysterical? And, if you agree, why do you think this is the case? Why is it macho and strong and in order for a man to be angry, but when a woman is angry, she is overreacting?

That’s a good way of putting it. This extends even further in the case of women who have suffered sexual assault. They are perceived as over-emotional and inherently unreliable. Their stories are automatically greeted with scepticism. I chose to push this perception to its limits, by portraying Lucy as the ultimate unreliable narrator. She revels in the power she has to make the reader uneasy, to disrupt their sense of certainty and “reality”. Lucy knows that she is the only access the reader has to the narrative, and she uses that power to force the reader to confront their own preconceptions.

Tell me about your main character.

I changed several details about JM Coetzee’s original character. My Lucy is in her late twenties. She is not gay, and she works as an academic. The only thing she has in common with the original Lucy Lurie is that they have both been gang-raped. The original Lucy is a calm, self-possessed person. My Lucy describes herself as a rage-filled harpy.

A woman who enjoys a glass of wine, the company of black men and also group sex. It all sounds quite compromising. Should it? Is your book about the double standards regarding young men and women in this country?

Your description comes from a scene in the book in which Lucy imagines herself having to testify in court against her rapists. She has heard about how the justice system relies on victim-blaming and stereotyping to discredit woman rape complainants. She imagines all the intrusive, prurient and insulting questions she might be asked if her matter ever went to court. It is not a pretty picture.

Who is your ideal reader?

Someone who is as open to the humour and satire in the book as they are to the weightier elements.

Do you have a writing routine?

My children are at school during the morning, so I use that time to be as productive as possible. Once they get home, my life becomes a blur of mom’s taxi, homework and cooking dinner.

Do you have writing advice for an aspiring author?

Read widely and frequently, both within your chosen genre and without. Take a writing course early on in your career, so you don’t waste time making the kind of beginner mistakes that I did as an aspiring writer.

Why do you write?

I write because I have a compulsive need to tell stories. My mind is full of “What if?” questions. I can’t rest until I get them down on paper.