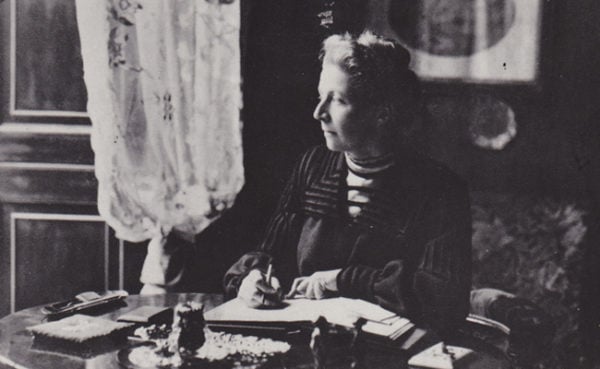 On the train between Bloemfontein and Kimberley, South Africa

To the Member of Parliament for North East Somerset

Today marks three months since I arrived at the first concentration camp in Bloemfontein. I have seen these downtrodden women, spoken to them, held them and their dying children in my arms – these truckloads of women and children, unsheltered and unfed, bereft of home, bearing the vivid recollection of their possessions in the flames.

And, the mass of the sweepings of a wide military drive – flocks and herds of frightened animals bellowing and baaing for food and drink, tangled up with wagons and vehicles of all sorts, and a dense crowd of human beings – combined to give a picture of war in all its destructiveness, cruelty, stupidity and nakedness, such as not even the misery of the camps, with their external appearance of order, could do.

Could you and your household try living for, say, a month on the rations given here in the camps? Cooking must be done outside using animal dung, for there is no wood or coal available. Or milk, or candles, or soap.

You should all live in a military bell tent. Water is limited to two buckets for eight people – for drinking, washing and cooking. Sir, you are allowed this:

It is such a curious position – hollow and rotten to the heart’s core – to have made, all over the state, large uncomfortable communities of people whom you call refugees and say you are protecting, but who call themselves prisoners of war, compulsorily detained and detesting your protection. The whole object, of course, is to enable Joseph Chamberlain to say in parliament that the country is settled.

The line is, generally, to speak of “refugee camps” and make out that the people are glad of your protection. It is absolutely false. They are compelled to come, and are wholly prisoners.

I was called to see a sick baby. So many, many times have I witnessed the same these painful, helpless months. The mother sat on her trunk with the child across her knee.

She had nothing to give him, and he was sinking fast. I thought a few drops of brandy might save him, but tho’ I had money, there was none to be had. I thought of the superintendent of the camp – a mile off – and sent a hasty message to ask him to let me have some. The reply was that the supply was only for his camp.

There was nothing to be done, and we watched the child draw his last breath in reverent silence.

The mother neither moved nor wept. It was her only child. Dry-eyed but deathly white, she sat there motionless, looking not at the child, but far, far away into depths of grief beyond all tears. A friend stood behind her and called upon heaven to witness this tragedy, and others crouching on the ground around her wept freely.

The scene made an indelible impression upon me. The leading elements in the great tragedy working itself out in this country seemed to have gathered under that old bit of sailcloth, whose tattered sides hardly kept off sun, wind or rain.

I can’t, in a letter, make you understand a bit what it is like when your whole sense of justice and right is offended at every turn.

I thought Lord Kitchener was considered such a great organiser, but is it good organising to have so little forethought, and make so little preparation, that thousands of people find themselves dumped down in strange places where there is nothing ready for their reception? It is hollow and rotten to the heart’s core.

Crass male ignorance, stupidity, helplessness and muddling. If only the English people would try to exercise a little imagination – picture the whole miserable scene, and answer how long such a cruelty is to be tolerated. Is England afraid of losing her prestige? Well, that’s gone.

Daily, children are dying. Will nothing be done? Will no prompt measures be taken to deal with this terrible evil? I survived to tell this tale to the world. Lived to sum up governments as poor things more careful of their own prestige than of justice and right – and, always, when the conduct of war is in question, devoid of conscience.

For the men of either side, I say nothing. They have chosen their part and must abide by it. For the women, also, I do not now plead; they are always strong to endure. But, I do ask in the name of the innocent and helpless children, that England’s humanity may triumph over policy, so that the sacrifice of the children may be acknowledged.

As a devoted pacifist, my belief is that war brings material destruction, bodily suffering and mortality. Still, the worst feature of war is the moral morass that degenerates and defiles.

In war, you can no longer be an individual; you are one of a herd, and that herd preserves itself by the reversal of the principles of virtue. Untruth, lies, hatred, inhumanity, destructiveness, spying, treachery, meanness immeasurable, suspicion, contempt, unfair dealings and illegality of every kind flourish and become, as it were, the “virtues of war”.

The atmosphere thus created is a moral miasma.

I implore you to change and listen to your conscience, as a fellow English patriot. To be brave. To admit the truth about this atrocity. For the sake of history.