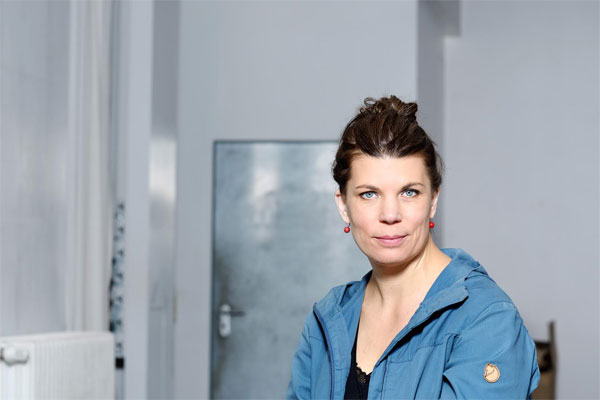 Helgard, tell us more about your work and your interest in the 100% project.

What if statistics had faces? What if we tried to get a whole city on a stage! These were the starting questions of the 100% project! What would we face if Stellenbosch was represented by a cross section of 100 people? How many of them want the cars out of town, and how many of them are students? How many have a private borehole, how many speak isiXhosa at home and how many of them have saved a life ...

Initially – 10 years ago – we were working on a set of rules for a process that would lead to a rather spontaneous event on the occasion of celebrating 100 years of the Hebbel Theatre in Berlin. We imagined inviting 100 Berliners to participate on stage to represent their city – the majority of them being far from seeing themselves on a theatre stage before and, perhaps, after. This project integrates a vast variety of different people in terms of age, background, experiences, population group, taste, etc.

In the beginning, the show was not intended to be a touring project. And, to the first invitations, we replied, “No, sorry”; but, the interest in touring this concept was growing, and the cities that invited us were very interesting, so, finally, we realised the potential of “working locally but comparing globally” – and we have enjoyed the journey that we started. Up to now, we have been to 34 different cities. 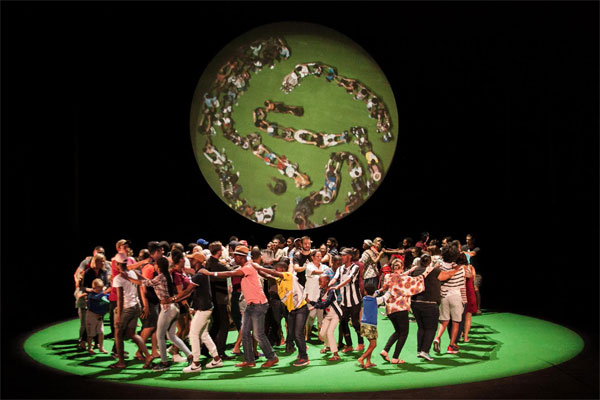 The 100% project is a global project with 34 participating cities. Why these cities and why Stellenbosch?

We created 100% shows at some cities in Europe (including London, Vienna, Oslo, Athens ...) and four cities in Australia, and in Asia we directed the show in Japan, Malaysia, Indonesia and South Korea; we also went to Canada and the USA and to Brazil!

Stellenbosch is the first city on the continent of Africa. We are very happy about this!

We accept invitations; we never apply. But, cities on the continent of Africa are definitely on our wish list – as much as Jerusalem, as an “impossible city”, where you would never manage to get all the different groups of society onto one stage.

The more segregated a city or society is, the more fascinating and interesting to watch how we co-exist!

The next show will take place in June in Voronezh, a city in Russia! 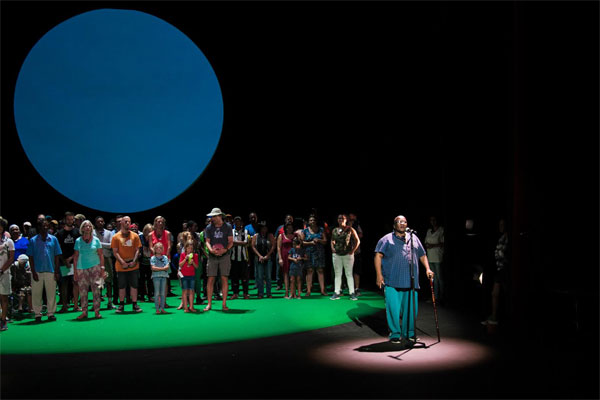 How and why were the specific 100 participants chosen?

The first step, apart from generating a local team, is always to contact the authorities and ask them for their latest numbers in the census, and to try to find out who of the authorities that issue those numbers would be willing and best suited to represent this position exactly. So, in a couple of cases, it has been the head of the statistics bureau – for instance, in Zurich, in Kraków and in Riga. And, sometimes, the first person in the cast is somebody either who is closely connected to the ongoing process of updating and generating statistic numbers, or who uses them for academics, like in Stellenbosch. This first person in the cast then starts off a snowball reaction of inviting the next and the next and the next, etc. But, within the framework of the grid of statistic numbers, every participant has to fit in individually.

In Stellenbosch, we chose to start three different chains, because it was obvious that the segregation is so extreme that we would never be able to create one connected chain. This is why we started a parallel process in three different areas.

At first, this casting process was easy. But, with each passing day, the stakes increased. As the various statistical categories began to fill up, the chances of finding people who could occupy the remaining categories became more remote. Gaps had to be filled, new connections established; some people could only be found through the help of others and their networks.

Any challenges working with such a diverse group of people, such as language differences?

Your view of Stellenbosch may vary widely, depending on what neighbourhood you live in, how much money you make, what skin colour you have and which language you speak. The town means radically different things to different people because of how they experience it – beliefs, politics and concerns are often the result of people's isolated experiences.

Here, in Stellenbosch, we are working in three different languages. During the rehearsal, this is slowing things down, but it is very important to get everybody in the boat. And, as we have all age groups on stage, it is also a challenge to explain everything to a 96-year-old lady and to a kid of two or three … It is starting to get beautiful as the 100 are realising that they need to help one another! 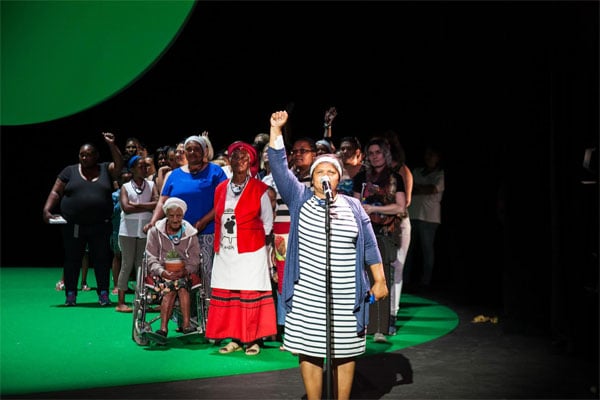 How would you describe the 100% event at the US Woordfees? Is this a happening, or a theatre show? How would this work, practically, on a stage?

By our definition, it is a theatre show that could ideally also happen in a market square! The audience is represented by the 100 on stage and, often, it is a very loud and lively situation – not one where the audience stays in the dark and is only consuming a show. But, the main part of the show consists of questions, and you see the answers of the cast, but I think every audience member is constantly busy with reflecting how they would answer the question, and which would be the group they belong to.

The idea and structure of the show is very simple. What makes it compelling is the meticulousness with which this theatre has been visualised and prepared. Most of the action occurs on a plain round revolve, which is projected simultaneously with an overhead shot backstage. Like in a Petri dish, you can look at how the individuals are moving and forming majorities and minorities.

There is a cumulative emotional power in this show: it’s often comic, sometimes deeply moving, always interesting, and, finally, celebratory. The final questions are about death: for all our differences, what we all have in common is that we will die. By the end of the show, this is far from a banal observation: it's profoundly present – in the way that all these breathing bodies are present on stage, and in our own presence as audience members. And, in the best and most subversive sense, this is deeply human.

What is the aim of the production? What do you hope to achieve? For example, are you hoping to challenge preconceived ideas about Stellenbosch?

Together, these 100 people represent a demographic profile of Stellenbosch – a series of statistical groupings enacted onstage, like a giant pie chart brought to life, a mass that embodies the city, a choir that hasn't studied any songs, a survey construction that is continually reconfigured into new group situations, ephemeral portraits of belonging and antagonism, a parliament of residents, a geometric body with 100 heads on 100m² of stage.

Reflecting the variety in this town and seeing all the diversity is the first step – understanding and tolerance might follow! So, in our experience, after the show, many people stay in touch and create a community, and it has a strong impact!

During the preparation stages of this production, have you made any interesting discoveries? For example, have you learnt anything new about Stellenbosch and its people?

As we come from Berlin, everything is new and exciting here in Stellenbosch, but I think that for the cast and the audience, too, this show will reveal a lot of things that you would normally ignore. This town has many different faces, and one can totally live in a very isolated bubble. During the casting process and the rehearsals, we also discovered that there is a lot of shame on all sides – shame about the history and the past; it almost seems impossible to form one unity that might be called a nation … 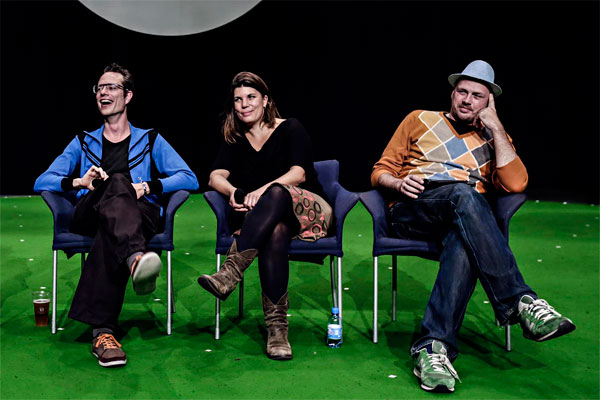 Helgard Haug, Stefan Kaegi and Daniel Wetzel have formed a team of author-directors since 2000. Their works in the realm of theatre, sound and radio plays, film and installation emerge in constellations of two or three, and solo as well. Since 2002, all their works have been written collectively under the label Rimini Protokoll. At the focus of their work is the continual development of the tools of the theatre to allow unusual perspectives on our reality.

For example, Haug/Kaegi/Wetzel have declared a Daimler shareholder meeting to be a piece of theatre. In Berlin and Dresden, they developed accessible Stasi installations / sound plays, in which the observation protocols could be listened to on android phones. In Hamburg, they staged “Weltklimakonferenz”, a simulation of the UN conference on climate change. At the moment, they are creating the tetralogy “Staat 1–4”, and focus on post-democratic phenomena.

They have been awarded the NRW Impulse Preis for “Shooting Bourbaki” (2003); “Deadline” (2004), “Wallenstein – eine dokumentarische Inszenierung” (2006) and “Situation rooms” (2014) were invited to the Berliner Theatertreffen. “Schwarzenbergplatz” was nominated for the Austrian theatre prize Nestroy in 2005. “Mnemopark” was awarded the Jury Prize at the festival Politik Im Freien Theater in Berlin in 2005, as was, in 2007, “Karl Marx: Das Kapital”. “Erster Band” (Haug/Wetzel) won both the audience prize at Festival Stücke in 2007 and the Mülheimer Dramatiker Preis that same year.

Rimini Protokoll was awarded the Faust Theatre Prize in 2007, the European Prize for New Theatre Forms in 2008, and, in 2011, the Silver Lion of the Biennale for Performing Arts in Venice. The multiplayer video installation “Situation rooms”, about the weapons industry, received the Excellence Award of the 17th Japan Media Festival. In 2014, Helgard Haug und Daniel Wetzel were awarded the Deutscher Hörspielpreis der ARD, and received the Deutscher Hörbuchpreis der ARD in 2015. And, in 2015, Stefan Kaegi and Rimini Protokoll got the Grand Prix Theatre / Hans Reinhart Ring.

Rimini Protokoll has been based at HAU, Berlin, since 2003.