Yonder is Lien Botha's latest exhibition at the The Barnard Gallery, Cape Town. (Read more details of the exhibition here.) The title indicates distance. It implies that something is being pointed out, in the direction indicated, but that it is "over there", beyond our direct reach or view. Botha asks her audience to mentally join the dots, to attempt to make sense of what we see much as we might try to make sense of our own lives which come to us in fragments of encounters, part of a larger whole which we cannot quite discern.

Naomi Meyer asked Lien Botha to explain the creative process behind a particularly evocative photograph of an outdoor play structure in an open field. This was her answer. 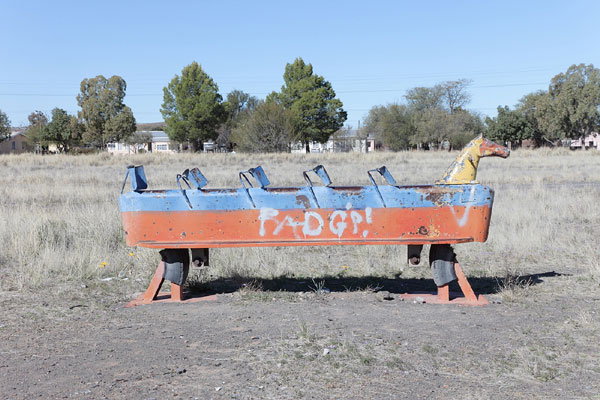 Small by comparison in the country without prose.

There are other stories about children before democracy, but these are the new stories; the ones which should not be, because it was so immense to get from A to D.

We perplex ourselves into this emergence which makes violence such a brutal “performance piece”.

We observe headlines and we have discussions about the latest atrocity:  “Brave boy walks home with baby after rapes.”

If you were to stop living here (as if this were possible), how would you nightmare it across an ocean?

Would you not forever harbour – somewhere – the image of the public squat, the mute fear, the smallest being so diminished in a country of fists?

Violence against women and children in South Africa is extreme. Of the 54 225 crimes against children reported to the South African Police in 2010/2011, over 50 per cent were sexual offences. (UNICEF)

Departing the farm where the veld healers live, we pass a children’s park. There is little left of it, the iron rocking-horse with all the signs of hardground’s incision – a printmaker going for the jugular. But that outcome heralds a price at an auction. This one, the one where children are poor and powerless, has no equity in the world. That is why the last swing is also broken and why there are no children playing here today. Or are they at school somewhere, in classrooms without windows?