Responsible filmmaking: ethics and spectatorship through the lens of Michael Haneke’s Amour

An established theme in the films of Michael Haneke is the role, influence and ubiquity of the media in modern society. Before a screening of Benny’s video in 1995, Haneke (2010:579) explained how the sheer mass of media has resulted in a situation where the “absolute equivalency of all the contents stripped of their reality ensures the universal fictionality of anything shown”, turning the spectator into “spineless consumer[s] of empty, interchangeable forms”. In a world oversaturated with various forms of media, Haneke addresses the responsibility of the filmmaker:

How does Haneke’s position influence his own approach to filmmaking, especially when the film in question, Amour, is based on the real pain and suffering of one of Haneke’s own family members? Is there not a danger of appropriating the real suffering of another for entertainment’s sake?

In response to Haneke’s address and the problem of representing violence, this article is guided by two broad questions in order to explore and formulate the responsibility of the filmmaker. Firstly, in the context of the ubiquity of the media, why is it important to make films responsibly and, secondly, how does Haneke assume his responsibility as a filmmaker for both his subject matter and his audience? Guided by the work of Stanley Cavell, Emmanuel Levinas and Judith Butler, I use Haneke’s film Amour as a lens through which to address these two broad questions, after which I return to Haneke’s call to give the viewer the chance to “recognize” what is shown. I illustrate how Haneke’s responsibility as a filmmaker enables the audience to recognise the opacity of someone else’s pain and suffering, which, in effect, enables them to respond to Anne’s suffering on their own terms and become responsible for the viewing situation.

To answer the first question, I focus on two specific scenes in Amour to illustrate, firstly, the invisible position of the spectator and, secondly, how the spectator’s invisibility relieves him or her of responsibility during the act of viewing. I explore the ontology of film by drawing from the work of Stanley Cavell, who theorises that a photograph is not a replica, copy, surface or handmade version of reality, but rather that a photograph is manufactured, and that what is manufactured is “an image of the world” (1979:20). If film, according to Cavell (1979:72), is “a succession of automatic world projections”, how does the manufacturedness of film, which presents an image of the world (instead of the world itself), influence or position its audience? After the opening scene of Amour, when the police break into the Laurents’ apartment and find Anne’s decomposing body, Haneke holds a long shot of a filling auditorium as spectators settle down for a piano recital. This reflexive scene reflects our own, the film audience’s, position. Similar to the audience watching a piano recital, we, too, are going to watch a production: we are going to watch a film that will show how the woman from the previous scene died. There is, however, a great difference between us and the audience of the piano recital. The piano player is in the presence of the audience and vice versa. While the world of the film is present to us, however, we, as the audience of Amour, are not present to it – the world of the film does not know that we are watching it. In other words, as Cavell (1979:24) says, the film “screens [us] from the world it holds – that is, makes [us] invisible”. By permitting us to view the world unseen, Cavell (1979:40) argues that the act of viewing satisfies a deep, modern desire, which is “not a wish for power over creation, [...] but a wish not to need power, not to have to bear its burdens”.

If the act of viewing relieves us of responsibility, then I argue that, on the contrary, we cannot wish not to bear the burdens of another, because we are responsible for one another. In keeping with Cavell’s revisionist approach, I turn to Emmanuel Levinas, who argues that ethics is the “calling into question of my spontaneity by the presence of the Other” (1969:43), which, for him, is signalled by the approach of the face. When Georges and Anne have breakfast the next morning, Anne becomes unresponsive and suffers a stroke. Georges tries to get her attention, takes her face into his hands and draws her closer. The approach of the face, for Levinas (in Kearney 1986:23–4), is “the most basic mode of responsibility”, which signifies that we are endlessly and boundlessly responsible for one another. I use Georges’s responsibility towards Anne as a metaphor of Haneke’s responsibility towards his audience, since both take responsibility for her: Georges in the ways in which he takes care of her and Haneke by way of representation. Since our responsibility for one another is, according to Levinas, formed pre-ontologically, I argue that we usurp the place of the Other when we watch films that are generated at the cost of real, horrific and violent experiences that provide material for our viewing pleasure. If our responsibility for one another is formed pre-ontologically, then our responsibility cannot be suspended during the act of viewing. How does Haneke assume responsibility for both the representation of Anne’s suffering and his (invisible) audience and, by implication, make his audience responsible in return?

To answer the broad second question, I draw from Haneke’s own article in which he outlines his approach to filmmaking in terms of editing, image and sound, and from the work of Judith Butler. Butler argues that a theory of subject formation that “acknowledges the limits of self-knowledge can serve a conception of ethics and, indeed, responsibility” (2005:19). Since an acknowledgement of the opacity of a subject is a prerequisite for responsibility, how does Haneke, through his use of editing, image and sound, imbue Anne’s suffering with opacity and, thereby, admit that he cannot represent Anne’s suffering in its totality? Haneke’s approach to editing and images departs from standard Hollywood practices or, as Mark Cousins terms it, closed romantic realism. With average shot lengths that are up to ten times longer than those of mainstream films, and with Anne’s slow deterioration being shown in fragments, interspersed with pauses and rests, Haneke eschews clarity and lucidity and, instead, opts for an opaque representation. Furthermore, while most films use music to prescribe the audience with specific emotions, Haneke avoids a non-diegetic soundtrack. When he uses diegetic music, however, Haneke ruptures the music mid-note. In addition, his use of silences and off-screen spaces enables the audience to imagine Anne’s suffering for themselves. All of these aspects imbue her suffering with opacity and, in effect, encourage the audience to take a part in the film’s meaning-making process.

After I have explored the two broad questions, I return to Haneke’s question of how to let the audience recognise that which is shown. Through his fragmentary and opaque approach to editing, image and sound, I argue that Haneke admits that he will never be able to represent Anne's suffering in its totality. He therefore offers his audience an ethical position in the film, since they are put in relation with a film that does not provide easy or quick answers. The ethical position enables the audience to confer recognition on her experience, which admits that even though they will never be able to fully comprehend what she is going through, the audience will continue to learn and strain towards a possible answer. As the film progresses, however, Georges’s actions complicates Levinas’s notions of responsibility. Is Georges not usurping Anne’s life for his own sake? When he eventually smothers his wife, Haneke neither condones nor judges his actions and, instead, leaves his audience to decide for themselves.

I conclude the essay by arguing that when pain and suffering is depicted as a knowable and understandable totality, or, even, as entertainment, we usurp the place of those who suffered such horror in real life. In refusing to represent Anne’s slow deterioration in its totality, nor explaining Georges’s decision to smother her, Haneke confronts his audience with the opacity of their experience. The audience’s ethical position, therefore, ruptures their invisibility, enables them to respond to the film on their own terms and encourages them to take responsibility, not only for themselves, but also for those family members, friends and others closest to them who will, inevitably, have to go through the irrecoverable pain and suffering of old age. How will you cope with the suffering of a loved one? Haneke suggests that, after watching Amour, you answer that question yourself. 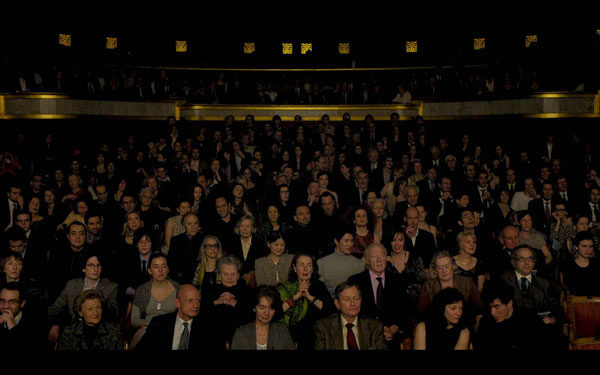 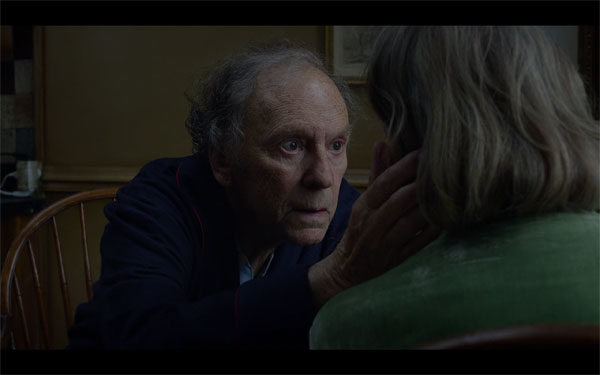 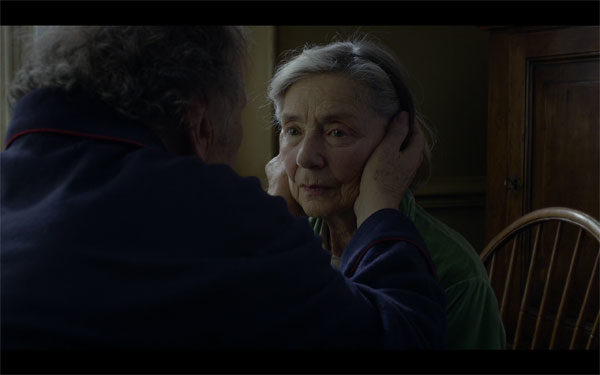 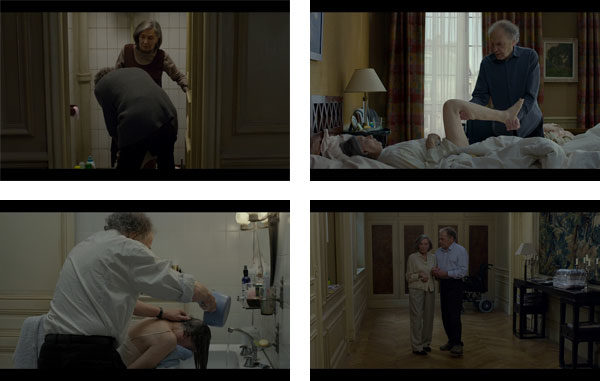 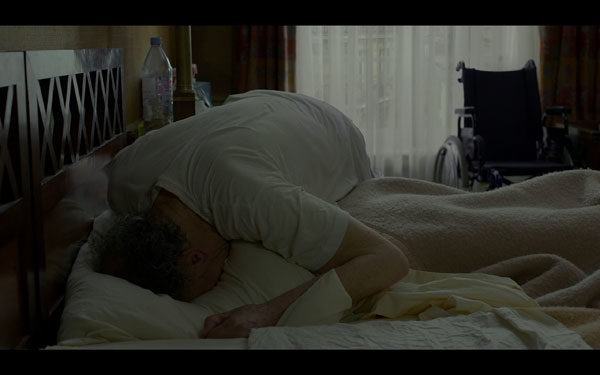 Klinger, B. 2006. Beyond the multiplex: Cinema, new technologies, and the home. Berkeley en Los Angeles: University of California Press.

Away from her. 2006. Regie Sarah Polley. Kanada: Foundry films.

4 “Onverhaalbaar” is my voorkeurvertaling vir “irrecoverable”. Die Oxford Dictionary verklaar die woord as “not able to be recovered, regained, or remedied”. Butler (2005:20) gebruik die woord byvoorbeeld so in Giving an account of oneself: “Moments of unknowingness about oneself tend to emerge in the context of relations to others, suggesting that these relations call upon primary forms of relationality that are not always available to explicit and reflective thematization. If we are formed in the context of relations that become partially irrecoverable to us, then that opacity seems built into our formation and follows from our status as beings who are formed in relations of dependency”. Ek gebruik “onverhaalbaar” in hierdie artikel om dieselfde gedagte te weerspieël: filmmakers kan nie die pyn en lyding van iemand verhaal, herroep of terugkry wanneer hulle dit ten volle probeer uitbeeld nie. Die “onverhaalbaarheid” van iemand anders se swaarkry sluit dus die “onvoorstelbaarheid” en “onvertelbaarheid” daarvan in.

5 “Ethics is back in literary studies, as it is in philosophy and political theory, and indeed the very critiques of universal man and the autonomous human subject that had initially produced a resistance to ethics have now generated a crossover among these various disciplines that sees and does ethics ‘otherwise’. The decentering of the subject has brought about a recentering of the ethical.” (Garber, Hanssen en Walkowitz 2000:viii-ix)