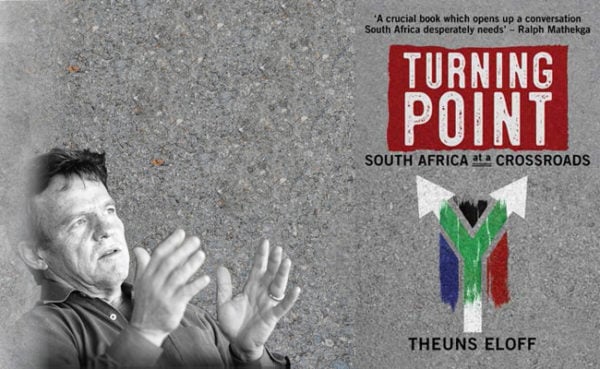 Theuns, earlier this year, you wrote a book called Turning point. Is this country still the same one about which you wrote this book? What has stayed the same and what has changed since the publication of your book?

The main trends outlined in the book have stayed the same. This includes sluggish economic growth, crime, state failure, state capture, the poor state of education, etc. My interpretation of what went wrong has also stayed the same, as has that of the trend with the approach of  the ANC elective conference in December 2018.

What has changed is the intensity of state capture, corruption and its consequences. This has been highlighted by, among others, the #Guptaleaks, Jacques Pauw's book, as well as that of Basson and Du Toit (Enemy of the people). Obviously, certain political events (such as the firing of Gordhan and Jonas) have also changed the landscape.

The country is at a crossroads, would you agree? What critical questions need to be addressed urgently, and which ones are the most important (I mention the ones on the cover): crime, unemployment, poverty, racism, state capture, unrest at our universities ...?

Yes, I agree (as my book’s title indicates). At a macro level, almost all (unfortunately) depends on the outcome of the leadership race of the ANC. A Ramaphosa presidency would have an entirely different outcome for the country to that which a Dlamini-Zuma one would have. No policy changes or nuances in policy implementation will be possible without a change in ANC leadership. If a Zuma remains at the helm, things will become worse. With Ramaphosa or another constitution-respecting president, some changes would be possible. But, it would take a long, long time and hard work to start the fight against state capture and corruption, build the economy again, attract investment and create jobs, fight crime, address racism and save the education system. There is no magic wand or silver bullet.

With regard to the transformation ideology of the ANC (the so-called 80-9-9-2 formula for all levels of society), I do not see that a Ramaphosa government (or, indeed, a DA coalition government in 2019) would deviate from that. Minorities cannot count on any political party to protect them from the reracialising of the whole of society in the name of "transformation". They have no one but themselves and the constitution to count on to take a stand and look after their interests. With a Dlamini-Zuma-led government, this would become worse, but any ANC government would stick to the ideology. The state would less and less protect diversity and the rights of minorities. The constitution would more and more be interpreted as if the equality clause of Section 9 trumps all other individual rights [such as Section 29(a)].

In your opinion, what can ordinary citizens do to make this country work?

Join the fight against state capture and corruption by speaking out and taking a public stand and joining public protests.

If you are part of a racial, cultural or language minority, start thinking outside the proverbial box and look out for yourselves.

Once you are satisfied that there is political and economic policy certainty, invest in your business and create as many jobs as possible.