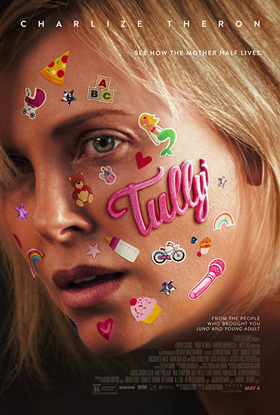 Marlo (Charlize Theron), a mother of three including a newborn, is gifted a night nanny by her brother (Mark Duplass). Hesitant at the extravagance at first, Marlo comes to form a unique bond with the thoughtful, surprising and sometimes challenging young nanny named Tully (Mackenzie Davis).

Tully is an honest, often very funny look at parenthood, at the lies parents tell themselves to stay sane, and at the reasons why they should perhaps start telling the truth. It also looks at the dangers of living for someone else, in this case one’s child, the dangers being slipping away and disintegrating.

Tully is the third outing for screenwriter Diablo Cody and director Jason Reitman, Juno and Young adult (also starring onse Charlize) being the first two very successful attempts and unconventional yet classic films. Tully is peppered with typical Cody dialogue. (“Your twenties are great, but then your thirties come around the corner like a garbage truck at five am.” “I don’t want a stranger in my house. That’s like a Lifetime movie where the nanny tries to kill the family and the mom survives and she has to walk with a cane at the end.”)

Reitman’s use of editing and sound design adds to the insanity the viewer feels. There’s a scene where Marlo’s son is throwing a screaming tantrum in the car, and kicking the back of her chair to top it off. You are trapped in this car with child and parent screaming at one another. Then, the scene cuts to an aerial shot of the car and cuts all audio. Goosebumps.

Charlize gives a scorching performance of a woman trapped in depression and spiralling towards destruction. It is not a glamorous affair. Marlo is overweight, frumpy, with dishevelled hair and a decidedly boring family car.

The film could be split into three parts. Part I is Marlo folding under the weight of raising three children. Marlo’s anguish is not noticed by her casually absent husband. She gets up, feeds the baby, changes the baby, burps the baby, soothes the baby, over and over again. The father plays video games. She deals with her daughter’s emotional growth and her seemingly autistic son’s outbursts. The father helps with homework, but mostly still plays video games.

Part II features a delightfully airy and bouncy Mackenzie Davis as the slightly odd night nanny called Tully. Over the course of a few nights, she reminds Marlo of the person she was, simply by seeing her, by noticing her distress. The two actresses have great chemistry, and Tully’s wonder and bounce counter Marlo’s exhaustion and depression.

Part III is the aftermath of the lies, the denial and the neglect. The surprise ending might not work for some. For others, its fairytale quality will pull together the film’s odd moments, its uncomfortableness and its understated beauty.