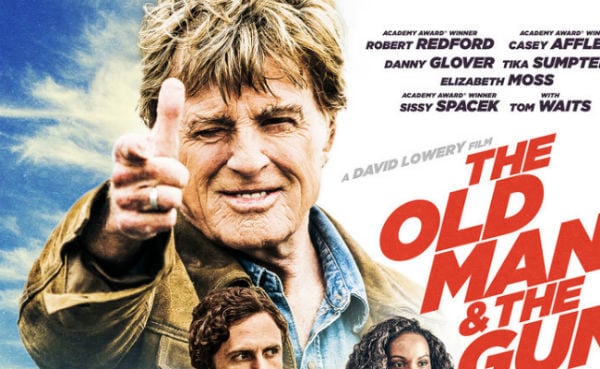 The old man & the gun is based on the true story of Forrest Tucker (Robert Redford), from his audacious escape from San Quentin at the age of 70 to an unprecedented string of heists that confounded authorities and enchanted the public. Wrapped up in the pursuit are detective John Hunt (Casey Affleck), who becomes captivated with Forrest's commitment to his craft, and a woman (Sissy Spacek), who loves him in spite of his chosen profession.

If this truly is Robert Redford’s last film as an actor, he is going out in style. The loss is therefore even more profound. Watching The old man & the gun is like sitting with your best friend on your back porch after a hard day and marvelling at life, at loss, and smiling at it all.

The pace is slow, but not boring. The film has an easy, lived-in feeling due to noteworthy performances, gentle humour, straightforward storytelling and wide, quiet shots.

The scenes between Sissy Spacek and Redford are perfection. Their wonderfully rambling conversations (kudos to the scriptwriter), their ease with one another and, obviously, their years and years of experience, are hypnotising. I could watch two hours of them just chewing the fat.

Casting Danny Glover and Tom Waits as Forrest’s sidekicks was pure genius. It is enough for them just to appear on screen. They bring so much charisma with them.

Casey Affleck, although his mumbling has gotten even worse, is endearing as a world-weary cop trying to catch Forrest. The bathroom scene between him and Redford, the only scene where they are together, will leave you in awe.

The old man & the gun does not demand too much; it does not aim to unsettle or shock. It tells a marvellous tale of a bank robber who simply loved robbing banks, got caught, broke out 17 times and returned to what he loved – robbing banks.

This film is also a showcase for a man who built up an astounding legacy as actor, director, environmentalist and founder of the Sundance Film Festival – a man who is, at the age of 82, at the height of his craft, bowing out. He will be missed.