The study on which this article is based was motivated by existing information on the discontinuity between home literacy practices and school literacy expectations of learners who typically speak a local variety of their mother tongue which, in various ways, is different from the standardised language of learning and teaching (LoLT). In this particular case the study refers to Afrikaans as a home language and language in education. The main concern is that these learners typically perform below par in standardised South African literacy tests such as the Annual National Assessment (ANA) and the Systemic Evaluation Test. They show slower achievement of literacy milestones, higher school drop-out rates and less achievement of access to higher-learning opportunities (Lahire 1995; Siegel 2007).

A considerable amount of scholarly attention has recently been dedicated to such apparent underperformance of young learners in literacy development assessment in South African schools (Donald and Condy 2005; Klop 2011; Marais 2012). A number of different instruments for the measurement of oral and writing skills have been discussed and evaluated; attention has also been given to possible explanations for the relatively low success rate in developing learners’ reading and writing skills, as well as to interventions that can improve experiences of success in early literacy development (Pretorius and Machet 2004; Olivier, Anthonissen and Southwood 2010; Murray, De Pascalis et al. 2016). While assessment of skills is useful in directing teaching and learning practices in classrooms, concerns remain about the rather uneasy connection between learners’ resources and curriculum goals.

This article refers to a qualitative study undertaken in grade 3 classrooms in two primary schools in rural Western Cape, where specific attention was given to the concept of language awareness and how it manifests as an underlying (and underutilised) resource in learners’ narrative development. Language awareness is an attribute recognised in New Literacy Studies which, according to Street (2003), relates to the fact that literacy is learnt in social contexts and not in isolation of such contexts. James and Garrett (1991) emphasise the fact that the ability to read, write and manipulate language is not merely a neutral, skills-based ability; it is, rather, an ability on which all social and cognitive functions depend. Such a perspective sees language awareness as a mental predisposition that a speaker develops consciously and unconsciously in sensitive response to his/her social and linguistic environment. It enables the speaker to pay attention to how languages work on an abstract and meta-cognitive level. A person who exhibits a good understanding of the rules and conventions of language use, both on a grammatical and on a communicative level, is said to have a well-developed language awareness. This ability extends beyond awareness of a speaker’s own first language to include other languages he/she may know.

For this study an extra-curricular programme, a so-called narrative enrichment programme, was developed and used in the first-language (or home language) lessons of three grade 3 classes in two different schools over a period of six months. It was aimed at stimulating and recognising typical features of the creative literacy development of the participating learners that would give information on the current state of their “language awareness”. We were interested in how language and communication competencies that learners develop in a home literacy and pre-literacy environment may be harnessed and utilised in developing educational literacy requirements. One of us gave attention to narrative forms that rely on learners’ language awareness, while also observing their ability to manipulate different registers and varieties of Afrikaans (including their own). An additional aim of the enrichment programme was to encourage learners’ general appreciation of spoken and written forms of language in narrative and in other everyday uses.

The narrative enrichment programme used during the first data collection term allocated contact time during the school day to the researcher for reading and discussing stories, then giving learners ample opportunity to write and illustrate their own stories in the form of “little books”. The use of little books as a means of literacy development was first introduced in the Ortnergasse school in Vienna as part of a programme devised to integrate minority language learners of migrancy background into the German LoLT system, while drawing on the existing language competencies of their home environment (Busch 2011; Pernes 2013). Another project on which this study was modelled is one undertaken among Sami L1 learners in a predominantly Finnish educational environment, where one of the aims was to enhance appreciation of a home language minimally used in school literacy practices (Pietikäinen and Pitkänen-Huhta 2013). The little books learners produced in our study were studied and analysed to gain insight into the learners’ understanding and use of the written genre of storytelling and of illustrating them in print. A whole range of other language development features can be observed in the same set of data.

The activities for the enrichment programme in the second data collection term were devised on the basis of specific grammatical, discursive and multimodal features that were found in learners’ little books. During this phase, using different kinds of picture cards (see Southwood and Van Dulm 2012 and the Next Up board game, 2013 version), learners’ difficulties in three kinds of narrative structuring skills were given specific attention. First, exercises of picture-sequencing tested learners’ awareness of the chronology of events and/or causality relations between one story element and a following one. Second, picture-sentence matching exercises were introduced to enhance learners’ grasp of the connection between verbal and visual elements of multimodal texts. Third, an exercise called Beginning, Middle and End was used to assess how learners recount the various components of a story presented to them in the form of a set of topically connected pictures, and in a longer narrative that was read to them. In the exercises focusing on learners’ ability to reflect on more and less meaningful ways of sequencing narrative elements we drew on work of Labov and Waletzky (1997) and De Fina and Georgakopoulou (2006).

Findings show that learners have a keen appreciation of the spoken form of language in that they listened keenly to the stories. One group showed special enthusiasm for retelling stories that they had heard at home. Another aspect of the programme to which learners responded enthusiastically was the activity of illustrating little books; this they appeared to enjoy more than writing them. Enthusiastic responses of learners are important because learning is much more likely to proceed successfully if learners enjoy the developmental activities. Learners’ levels of linguistic awareness regarding genre, register and grammatical aspects such as spelling differed considerably. In their little books they showed varying degrees of dependence on the already familiar genres of fables and fairy tales. Regarding writing conventions, they also showed varying degrees of awareness of, for example, appropriate punctuation. Interesting examples of regional language use which included phonological awareness of the spoken form occurred, as for example in spelling the word “broer” as “broeg”, reflecting sensitivity to local distribution of the rhotic (uvular fricative [R]), instead of the alveolar trill [r]. There were interesting findings regarding the influence that learners’ life experiences have on their narrative products. The picture sequencing activities reflected learners’ creative use of familiar everyday events and artefacts to make sense of elements unfamiliar to them. Quite a number of instances are recorded in which learners did not recognise particular images (such as a simplified and dated version of a rocket landing on the moon), or did not have access to information underlying a certain picture sequence (such as the development of a butterfly from a chrysalis). The ways in which learners put effort into making meaning of what was presented to them testifies to linguistic awareness that deserves to be recognised and rewarded.

The rich and varied data collected illustrates theoretical positions regarding the different kinds of habitus learners encounter, the ways in which educational systems privilege some linguistic resources above others, the connections between language and identity, and the ways in which new forms of literacy may assist in better facilitating learners’ emerging literacy and the learning that such literacy should facilitate. We find that there is indeed a mismatch in literacy practices of home and school which possibly results in learners’, as well as teachers’, not sufficiently recognising the skills that learners do have. Furthermore, we find evidence that learners’ linguistic creativity which demonstrates the working of their language awareness often goes unrecognised in school language classes. Such findings, we conclude, should be utilised as a basis for developing teaching practices that will assist in developing the kinds of literacies that school curricula typically exact.

Tabel 1.3. Opsomming: Graad 3 Sistemiese Evaluering in Skool A and Skool B 2013 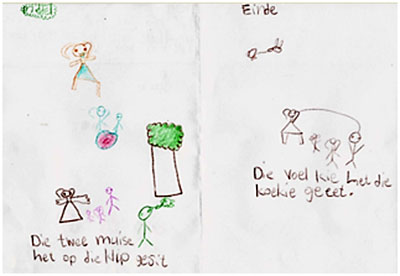 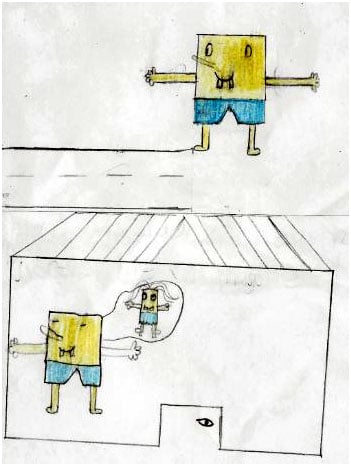 Busch, B. 2011. Building on heteroglossia and heterogeneity: The experience of a multilingual classroom. 3rd International Conference on Language, Education and Diversity (22–25 November).Auckland, Nieu-Seeland.

—. 2014. Building on heteroglossia and heterogeneity: The experience of a multilingual classroom. In Blackledge en Creese (reds.) 2014.

Pitkänen-Huhta, A. en S. Pietikäinen. 2014. From a school task to community effort: Children as authors of multilingual picture books in an endangered language context. In Helot e.a. (reds.) 2104.

5. Lees julle stories by die huis? / Do you read stories at home?

7. Lees julle koerante en/of tydskrifte by die huis? / Do you read newspapers and/or magazines at home?

9. Vertel jou familie vir mekaar en vir jou stories? / Do your family members tell each other, and you, stories?

10. Is daar ’n biblioteek naby jou huis of op die plaas waar jy bly? / Is there a library near your house or on the farm where you live?

12. Watter tipe boekies het hulle daar? / What kinds of books do they have at the library?

13. Is daar baie Afrikaanse boekies in die biblioteek? / Are there lots of Afrikaans books in the library?

16. Waaroor sal jy nog wil stories skryf? / What will you write about next?