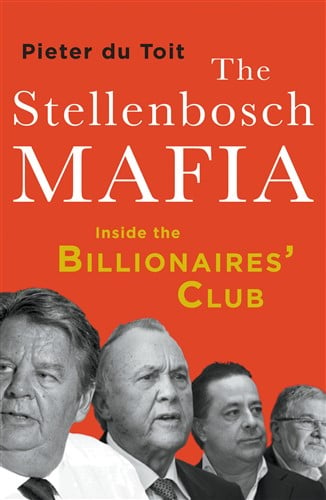 During the half century preceding the 2nd World War, an unsettling written work starts to do the rounds, setting out how

The Stellenbosch Mafia: Inside the Billionaires’ Club

During the half century preceding the 2nd World War, an unsettling written work starts to do the rounds, setting out how European and global Jewry secretly plans to achieve world domination. The document adapts according to political persuasion: varieties emerge declaring this “great Jewish coup” as the driving force behind an increasingly aggressive global capitalism; others warn that rising labour movements and associated radical politics evince the existence of malignant Jewish communists operating in the background.

However, on many an occasion since the document’s publication in Tsarist Russia in 1903, experts have succeeded in conclusively showing that this anti-Semitic work is a complete hoax.

This document is known as the Protocols of the elders of Zion, probably the most serious and far-reaching example of fake news in the modern era.

Despite the fact that so many experts have proven the Protocols to be an infamous lie, the famed industrialist and known anti-Semite Henry Ford paid for the publication and distribution of thousands of copies in the USA, and education mandarins in Nazi Germany declared the Protocols to be mandatory reading at school level.

By May 1945, approximately six million Jews had been murdered in Nazi death camps in Eastern Europe.

Du Toit’s Stellenbosch Mafia reminded me of the Protocols, not because the writer was conjuring a hoax of sorts about a secretive group of Afrikaner billionaires, but because of his attempt to assess the odd mixture of stories, anecdotes, legends, fake news and conspiracy theories that currently pervade the history of Afrikaner capital.

Under the circumstances, this book is a welcome development. South Africa is suffering under the unholy trinity of state capture, rampant crime and consistently disappointing economic growth, a perfect environment for violently divisive politicians to scapegoat entire groups of people for political gain. To vary a well-known Afrikaans adage slightly, when poverty enters by the front door, affinity with the truth flees by the back door. And, in the Information Age, with its accompanying social media overdose, only cleverly packaged fake news spreads more quickly than an Australian bush fire.

The “public relations” firm Bell Pottinger’s ruthless “white monopoly capital” project seriously divided South Africa and hijacked our public discourse. The Guptas and Jacob Zuma picked up the tab for a public debate primed by big money and corruption, instead of being guided by democratic dialogue and cooperation.

But Stellenbosch Mafia does not seek to straighten any records, nor does it read like a step-by-step refutation of a dangerous and hysterical hoax. It does contain an account of the history of (some of) Stellenbosch’s business indunas, but, overall, it does not live up to the standards of a historical heavyweight such as Hermann Giliomee’s magnum opus, The Afrikaners, or Tembeka Ngcukaitobi’s powerful The land is ours.

Stellenbosch Mafia’s problem is not that it diverges from the established principles of nonfiction writing. Rather, this book’s fundamental problem is that its goal and narrative execution are unclear.

The thin crimson book, with its sensational Siren-like title, reminds one in a very ironic manner of Karl Marx’s Communist manifesto, and the profiles of four great Afrikaner businessmen on the front page (from left, Johann Rupert, Christo Wiese, Markus Jooste and Jannie Mouton) seem to have been inspired by the ranked heads of Marx, Engels, Lenin and Stalin, which often appeared on propaganda posters from the Soviet era.

I couldn’t help but giggle at the subtleties of this, but luckily the similarities aren’t striking enough to generate the impression of some express bias.

Yet, this mischievous front page seems to be a leitmotiv for the unclarities that follow. The preface could potentially, with a little work, be considered a summary of the entire book, since Du Toit could not help but sing praises in nearly every subsequent chapter about “Stellenbosch [the] unique town, steeped in Afrikaner political and cultural history ... Its oak-lined streets and Cape Dutch architecture, girded by cobalt-blue mountains ... one of the prettiest towns in the country and an eminently desirable address” (xv).

Du Toit’s description could easily sit down and school an experienced writer from Getaway, but the notion of “Stellenbosch as the prettiest town” unfortunately becomes a filler due to so much unnecessary repetition, which makes one wonder whether the book belongs on the foyer table of a swanky Dorp Street real estate agency.

Du Toit concludes the preface with a mission statement (xvi): the book, he writes, intends to interrogate the merits of the claim that a “Stellenbosch Mafia” of sorts exists, and ascertain who the members are and from where they derive their wealth. The writer therefore discloses an investigative rationale early on. Given the high standards of investigative journalism set by contemporary sleuths such as Jacques Pauw and Pieter-Louis Myburgh, it is important to take note of Du Toit’s setting out of the extent of his purported research, even if he states it in the negative:

A study like this one, incomplete as it undoubtedly is, cannot rely solely on anecdotes about liquid lunches at the Decameron Restaurant or a billionaire importing luxury vehicles and giving them to friends. Nor can it only be about the vanity of Jooste and the inevitability of Steinhoff’s demise.

Unfortunately, the anecdotes mentioned here, if measured against the factual discussions in the book, are the sum total of Du Toit’s search for signs of a mafia. More than half of the book (that is, 105 out of 193 pages) is dominated by personal tales about the Rupert family and their corporate heritage (henceforth the “Rupert chapters”).

It makes sense, at least initially, that more than one chapter is reserved to explain the Rupert-related corporate empire. The story of Dr Anton Rupert was a central and formative moment in the socio-economic environment that followed the Anglo-Boer War, as well as during the Afrikaner-dominated South Africa of the previous century’s second half.

Rupert’s corporate baby, Rembrandt, is thoroughly discussed, and Du Toit succeeds in locating the company within the context of the earlier and later stages of National Party rule (“The first Afrikaner businessman”, 55). Du Toit also attends in a nuanced fashion to Rupert Jr’s role as a politically verligte Afrikaner businessman during apartheid, and as a disillusioned and disappointed figure within the unruly, inflamed political tectonics of the state capture era.

A core moment not captured in the “Rupert chapters”, or in the remaining parts of the book, is the 2008 financial crisis and its consequences for the South African political and economic environment. This geopolitical event did not merely shock some European nations into an era of austerity, but also exposed the structural weaknesses and even blatantly corrupt behaviour within the global financial sector. Since the crisis and its consequential epidemic of unemployment, homelessness and social decline, the world has entered a new era of protest politics and ideological extremism on all sides of the spectrum. For books such as Stellenbosch Mafia, with its initial aim to investigate the intricacies of Afrikaner capital, at least a few pages of contextualisation are crucial.

Moving on from the Rupert chapters, one expects the book to commence with a discussion on the various other faces of Afrikaner capital, as represented by a set of photos under the heading “Cast of Characters”, directly preceding the preface.

The reader will be disappointed. Barring a short intermission discussing Edwin Hertzog’s Mediclinic empire, based on an interview with the private healthcare mogul, the book steams ahead into a new section that seems to be dedicated entirely to the fall of Steinhoff and Markus Jooste. The “Markus chapters” would be impressive, had they not been beaten to our bookshelves by James-Brent Styan’s Steinhoff en die Stellenbosse boys and other in-depth related works.

What makes the Markus chapters even more out of place is the strikingly apparent contrast which they form with the Rupert chapters. Be it intentionally so or not, the impression is generated that the lion’s share of the book is a Rupert PR stunt, while the rest of the book is meant to kick Steinhoff’s corpse deeper into the gutter.

A final scanty appendix is chapter 13 (“Turning new money into old”, 181), which contains a few personal anecdotes and tales by Capitec headman Michiel le Roux and PSG man Jannie Mouton. This small chapter contains, much like the Rupert chapters, a set of mere dismissals of the notion of some secretive, puppetmastering Boer mafia.

The recurrent theme here is that of the distinction between so-called inkommers, with their new riches, and the originals with their older money. This is a juicy and slightly childish jot of sensation, but it probably serves the aim of trying to show the existence of internal divisions between those accused of being Afrikaner mafiosi. Unfortunately, this doesn’t do much, because conspiracy theorists such as the lads with the red berets will be quick to explain that these apparent divisions only illustrate the existence of two heads on the same secretive basilisk.

To conclude, Stellenbosch Mafia is a pleasant piece of research supplying a good dose of quick facts and insight into the world of South Africa’s richest Afrikaners. Du Toit can be praised for his attempt to clarify those pesky Boer mafia accusations in this era of dezinformatsiya.

Did he succeed? I doubt it. Bringing full clarity and consensus might be an impossible task. As renowned Afrikaans writer Etienne van Heerden’s beautiful and unsettling new novel, Die biblioteek aan die einde van die wêreld, illustrates, we are living in an era characterised by a total inability to engage in meaningful dialogue.

In the novel, the interactions of Van Heerden’s Afrikaner character, Ian Brand, and the staunch #FeesMustFall activist character, Thuli Khumalo, show how an unyielding and pig-headed wall divides political groups in our ethnically diverse and materially unequal society, where attempts to straighten the record, to deploy reason or to emphasise the facts are met from the outset with decolonial suspicion, before getting lost in a maelstrom of aggression and historical pain.

But, drawing upon the story of the Protocols, we must avoid misunderstanding history and allowing dangerous falsity, lies and hoaxes to take the lead of a critical mass of people. We must, accordingly, support fact-finding missions such as Stellenbosch Mafia, insofar as they advise caution and demand fealty to the truth.

At the same time, high-flyers such as our Afrikaner billionaires must understand that a charitable lifestyle does not relieve one of being questioned and challenged in our democratic society.

What will always worry me is that while a small band of Afrikaans speakers and language activists with meagre resources are fighting for indigenous multilingualism at Stellenbosch University, Du Toit’s book reveals how SU rector Prof Wim de Villiers – whose administration’s policy of doing nothing contributes to the erasure of Afrikaans as a functional academic language at the university – enjoys a luxurious lunch with the local set of Afrikaner billionaires at De Volkskombuis Restaurant (“Preface”, xi).

Their collective short-sighted elitism is shameless. I hope for the day when middle and working class Afrikaner and Afrikaans-speaking members of the populace, who are often derided by the more privileged Afrikaans establishment as “common” or “verkramp”, will step up and repudiate these untouchable gentlemen.

Read this review in Afrikaans: