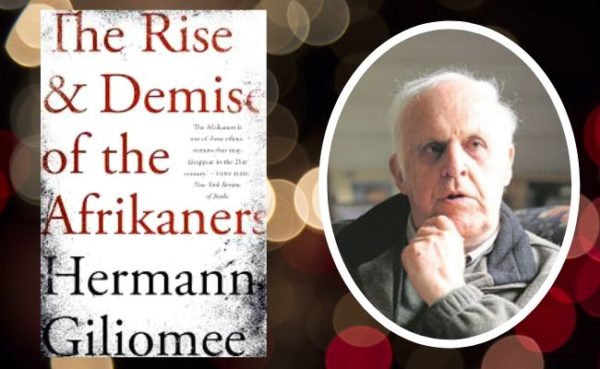 The rise and demise of the Afrikaners
Hermann Giliomee
NB Publishers
ISBN: 9780624086710

I was fooled into thinking that this latest publication by the academic Hermann Giliomee was a book of fresh research into an intriguing subject. However, The rise and demise of the Afrikaners contains 16 chapters, all of which has been published before, with the exception of one, which is an academic paper that was delivered at a conference. The rest of the chapters were published either in the media or in academic journals. This means that there is very little in this book that can considered to be newly published research.

In addition, I have found the title of the book a bit misleading. It is, perhaps, too broad a title. The book does not cover, for example, the history of the Boer republics of the 19th century. Section one under the title “The making of apartheid” starts in 1910, and the book steadily builds up to the election of 1948, wherein the National Party under Daniel Francois Malan (1874 — 1959) obtained power. Section two is titled “Attempting to share power without losing control”, with a big focus on the presidency of PW Botha. This section also contains a chapter on the Afrikaans poet Breyten Breytenbach, which also reflects on the Dakar conference. The last two chapters covers just around 70 pages of the book and is respectively titled “Losing power” and “An elite abandons its people”, the latter of which contains only two chapters, both of which focuses on the decline of Afrikaans as a language of tuition, in particular the developments at Stellenbosch University.

Make no mistake, “The rise and demise of the Afrikaners” contains wonderful insights, and the book is the result of many years of study. Giliomee’s narrative style is more than palatable to keep one’s attention. His arguments are well constructed and his history is scientifically composed, often supported by statistical evidence. It can be said that this volume is a wonderful collection of articles on the subject at hand. It is not, however, a systematic and comprehensive history of the rise and demise of the Afrikaners.

The argument for the demise of the Afrikaners, is built mainly on the argument that the Afrikaans language is disappearing as a language of tertiary tuition. There are no discussions on the role of Solidarity and Afriforum. The Afrikaner enclave of Orania is mentioned just in the passing, granted that Orania is a very small little town, with just about 1300 inhabitants, however the town does harbor strong symbolic significance. But then, the book also avoids definitions of the identity of Afrikaner. It seems to assume that by “the Afrikaners”, it is referring to white Afrikaans speaking people; however, in the final chapter Giliomee remarks that “The future of Afrikaans is literally in coloured hands, and so is the future of the Afrikaners” (324). Bear in mind that the word ‘coloured’ is also one with enough baggage to make one rather want to avoid the word. And if the future of Afrikaans is in the hands of “coloured” people, does that imply that Afrikaans was in the hands of whites in the past?

The biggest gap in the book for me is left by the fact that there is no concluding chapter. Giliomee does refer to agriculture in the book however, a more detailed discussion would have been fitting, particularly of the issues pertaining to expropriation of land without compensation. South Africa has seen a massive decline in commercial farmers since the dawn of the new democracy in 1994. Hundreds of thousands of jobs have been lost in the process. Although agriculture is not the bedrock of Afrikaner’s livelihood, the decline of agriculture and the mining sector poses a risk not just for one group in the country, but for the country as a whole, as particularly young South Africans are ever sinking into more and more unemployment.

Despite the ambitious title of this book, and the feeling it left of not being detailed enough, The rise and decline of the Afrikaners is still very much worth the read. The value of this book lies in the fact that it brings together sixteen well researched articles relating to the subject at hand. As the decline of the Afrikaners is a matter that is still underway, and not yet completed, this perhaps also impact on the book as the writing of contemporary history poses its own headaches, as the researcher has no hindsight view on which to reflect. For some, Giliomee’s discussions of Hendrik Frensch Verwoerd (1901 — 1966) might stir controversy, as Giliomee takes a much more nuanced view than many others, not only on Verwoerd, but also on PW Botha.