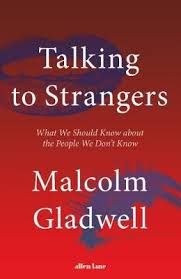 Talking to strangers – what we should know about the people we don’t know
Malcolm Gladwell
Publisher: Allen Lane
ISBN: 9780241351574

I was not eager to read this book. The issue of psychology is not my typical interest. However, once you get going, it is difficult to put down. What made this book such a wonderful read is al the fascinating examples that Gladwell makes use of to illustrate problems and suggest answers from a psychological perspective. What becomes clear very early on is that humans overestimate their abilities to judge others. We make very poor judgments. Even the most educated people, such as judges, very often make very poor judgments. One must understand the far-reaching implications of this. A lot of gender-based violence happens precisely because of poor judgment. Dangerous and violent criminals fool the corrective services into thinking that they have been rehabilitated, only to stand trial again very soon after being released. Even computers are better at making these kinds of judgments than humans.

But it does not only pertain to judges. The art of judging people has many other applications as well. For example, law enforcement, diplomacy, and interrogations. In this regard, Gladwell has a wonderful chapter on Cuban spies in the United States of America. The reason why some spies are so successful, he writes, is not because the spies are so good, but because the people whom they fooled were so poor with judgment. Other examples employed in the book are what happened in the run-up to the Second World War. After meetings held with Adolf Hitler, the British Prime Minister Neville Chamberlain assured his nation that Hitler and Germany is no threat to the rest of the world. This as opposed to Winston Churchill, who never met Hitler, but maintained the threat of the Nazi’s.

Gladwell examines various court cases in the book, ranging from murder cases to sexual molestation. There are also examples taken from the world of business, where accounting irregularities and investment scandals cost people millions of dollars. We have had similar examples closer to home, in South Africa, which also comes to mind, and might also have featured well in a case study. All these examples drive home the point that Maxwell continues to try and make – that we must be very careful and rather reserve our judgment of strangers. What is also clear from this book, is that there might be people that are by nature better at judging strangers. But society tends to ignore these people and to see them as too skeptical, but the average person would do well not to judge too easily, and to remain skeptical. There are also other elements at play, where people will sometimes refuse to believe the truth, despite overwhelming evidence.

Talking to strangers made me realise yet again that one cannot separate one field of study from the other. History and psychology go hand in hand. The implications of our poor judgments as humans are enormous, sometimes even global, as in the case of a world war. We must be more alert to the cultural differences amongst people because what seems like a giveaway in one culture can mean something completely else in another. While it is impossible for us not to judge, it is good to reserve our judgments. Perhaps we judge others so poorly because we struggle even to make sound judgments of ourselves and our prejudices. The essence of the scientific method is, after all, to re-examine, re-evaluate, to think critically and to question everything, even our own beliefs.