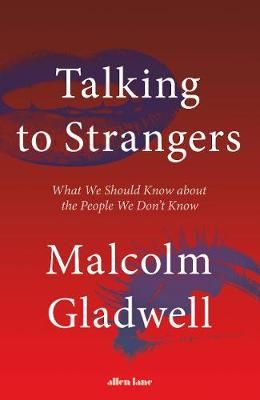 Talking to strangers – what we should know about the people we don’t know
Malcolm Gladwell
Publisher: Allen Lane
ISBN: 9780241351574

Most avid readers will be familiar with the name of Malcolm Gladwell. If you haven’t heard of his international bestsellers like The tipping point, Blink and Outliers, then perhaps you’ve encountered the 10 000-hour rule, his estimate on the time it takes to achieve success in a field. His latest book, Talking to strangers, has just been released.

I haven’t read any of Gladwell’s previous work, but I was certainly intrigued by his reputation as an entertaining writer with a level of insight and access cultivated over years as a journalist. I discovered after only a few pages that what little I knew of him, was accurate.

Which, by the argument he makes in this book, may be a fact in itself that can be regarded as a rare achievement. Evidently, through the career he has made talking to strangers, he began to realise how inaccurate our assumptions can be – and, as he so brilliantly illustrates throughout, how utterly destructive this trait can be.

The subhead to the cover title declares this to be a book about “what we should know about the people we don’t know”. What this is, exactly, he proceeds to tell us – incrementally – through several seemingly unrelated cautionary tales.

He is a journalist, after all, and stories are his stock-in-trade. His chosen few encompass a diverse collection, drawn from historical and contemporary events. It must be so, because Gladwell’s mission is to prove his opening statement, and, to achieve this, he must show us that even those with the best training in recognising deceit – from spies to investment specialists to psychologists – fail more often than expected.

The question, then, is, how solid are our own assumptions?

He tells of, among others, the spy nicknamed the Queen of Cuba, who seemed destined for leadership and managed to fool everyone; British prime minster Neville Chamberlain, who, in 1938, declared he’d figured Hitler; the hardened investigator who’d tried for years to raise the alarm about Bernie Madoff and the world’s biggest Ponzi scheme.

Throughout 348 pages, he demonstrates how things are never as simple as they seem, even in the complexities of policing crime hotspots and the trying of cases around sexual abuse.

The story of a random traffic stop is perhaps the most shocking – not because of the speed with which things escalate and end in tragedy, but because it appears so random. It is the one that begins and ends the book; it is a procedure most of us are familiar with.

The pace of the book is measured, because as simple as the task may appear, it takes hold of the slippery subtleties of human interaction. He references numerous studies (often only as a footnote) and his own interviews with many of the protagonists.

But this is not an exercise in the esoteric, written in an academic fashion. These are the stories of real people. They’re the stories that we enjoy most, and are, from their reading, those that Gladwell relishes compassionately too. He gives us granular context and light in an accessible way that is often missed in our warp-speed world.

It is essential insight for a world where our interactions with strangers seem to grow steadily worse, not better. Think of one emotion that sums up activity on your social media feeds, and you get the idea. The news is filled with talk of Trump’s wall, Brexit and immigrants. Asians are increasingly finding themselves marginalised because of racist associations with the coronavirus.

This is all about our interaction with strangers. Yet, ironically, we remain a positive lot, and, as Gladwell notes, that’s where it gets messy.

“To assume the best about another is a trait that has created modern society,” he writes. “Those occasions when our trusting nature gets violated are tragic. But the alternative – to abandon trust as a defence against predation and deception – is worse.”

Talking to strangers is a book that gives you stories you’ll enjoy and retell. It may well change the way you see the world.