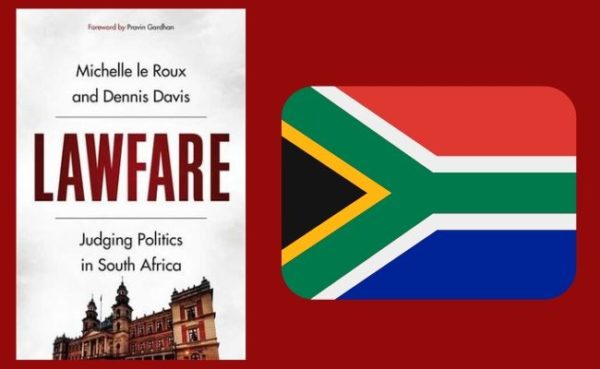 I have never heard of a word such as “lawfare” and was surprised to find it in online dictionaries. It is not, at least, difficult to understand this word, being clearly a combination of the words "law" and "warfare", where the two words morph, to form a new but related idea. The legal system is there to serve as a third party arbiter that is independent and hopefully also objective. The role of the courts is to settle civil disputes and make judgements in criminal cases. But lawfare is what happens when the court is used to settle all kinds of disputes normally considered to be outside of the parameters of the court. Otherwise as put by the authors: “The key question, which has been explored in this book, is the extent to which the judiciary is entitled to intervene in controversial social, economic and political disputes” (246).

South Africa had a system parliamentary democracy with limited franchise based on race, before it was replaced by a constitutional democracy with universal franchise in 1994. This means that decisions made by the majority can be overruled by the constitutional court. But even before 1994, the judiciary as an independent arbiter at times, was able to champion rights which were trampled on by the apartheid government. The complexity of this matter arises in the question of what is the exact role of the legislature as opposed to that of the judiciary: “when the judiciary decides cases of fraught, political, economic or social importance, the debate hinges on whether it has overstepped the boundary between its competence and that of the democratically elected legislature” (247). Thus, it is telling that in the same way that the National Party was critical of the judiciary during apartheid, much the same happened after apartheid.

The book explores cases from the apartheid era in four chapters, including that of the Rivonia trial and cases involving detention without trial. It would have perhaps been interesting if the Treason Trial of 1956 was also discussed (there are only references to this trial). The Treason Trial was a classic example of political battles being fought using the judiciary — one in which the government of the day suffered a crushing defeat. It is therefore clear from the onset that Lawfare is not a comprehensive book on the issue. However, comprehensiveness was certainly not the aim. What is most important in this book, is that the cases are presented in a palatable way, devoid of complicated legal jargon, and at the same time properly contextualised for the average reader.

The attention then shifts to seven chapters documenting cases in the post-apartheid South Africa. These include some of the bitterest battles fought since 1994. There is the Treatment Action Campaign and their leader Zackie Achmat, who challenged the government over HIV/AIDS treatments. The controversial stance of former president Thabo Mbeki and health minister Manto Tshabalala Msimang (1940 — 2009), will always remain a tragic chapter in the history of South Africa after apartheid. One short chapter in the book explores the legitimising of gay marriages. The controversial visit of Sudanese president Omar al-Basjir, as well as the security upgrades to former president Jacob Zuma, which was challenged by the Public Protector and resulted in a court case, is also covered.

It should be noted that there has been some strong criticism launched at Lawfare, in particular from one Professor Koos Malan from the department of Public Law at the University of Pretoria. In a review written for the newspaper Rapport in Afrikaans, Professor Malan describes the Constitutional Court as being politically prejudiced towards the ruling African National Congress. He also concludes that the book is not a complete reflection of all the relevant cases and note, amongst others, the case of Renate Barnard and the case surrounding the use of the Afrikaans language at the University of the Free State.1 Perhaps the book does briefly acknowledge the impartiality of the courts when it notes that “The dominant trajectory [of the court] will depend on the outcome of political and legal contest shaped by the prevailing political discourse, the legal traditions in the country and the available legal materials —being existing legal precedents, the facts of the particular dispute, the quality of the lawyering and the ideology of the judiciary” (302).

Despite the criticism that it received, Lawfare is one of the most interesting and stimulating books that I have read in a long time. It is a book that makes important legal cases from the past accessible in a language easy to understand for the average person. The book provides a wonderful window into the rich history of the judiciary, which forms an indispensable pillar of the South African democracy. The book is also an urgent call for an active citizenry. In the concluding chapter, the authors warn that despite the checks and balances build into the Constitution, these pillars have been weakened, if not destroyed. The courts continue to serve as independent arbiters, but “courts cannot do it alone”. The success of the judiciary to a large part depends on active citizens who must understand constitutional rights and actively participate in building a dignified and free society.