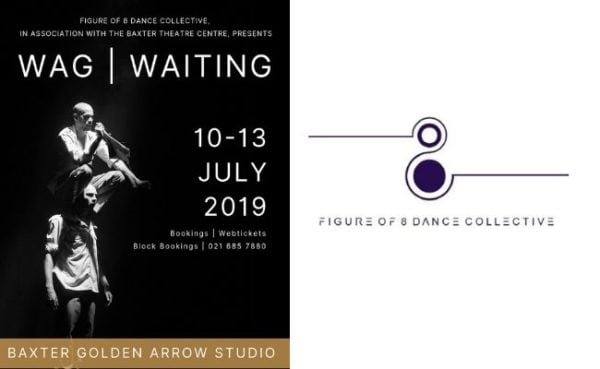 The award-winning dance and choreography duo Grant van Ster and Shaun Oelf, from Figure of 8 Dance Collective, will present their brand-new work Wag I Waiting, at the Baxter Golden Arrow Studio, for a short season, from 10 to 13 July at 20:15pm every night, and matinees on 11 July at 12:00 and 13 July at 15:00.

Figure of 8 Dance Collective, established in 2014, is the combined vision of artists Van Ster and Oelf. The Cape Town-based dance company has fast become respected for their work on the local and international dance scenes.

With this latest dance production, the company explores the concept of waiting and begs the questions: How long should one wait? What are we waiting for? And what happens with time as we wait?

“Each and every one of us are confronted by the various stages of waiting at some point in our lives,” explains Grant. “Different people handle situations differently and respond differently. In today’s fast-paced and highly charged world, waiting also teaches us patience and in some cases, tolerance. However, waiting can often lead to stress, a cartwheel of emotions and exhausting situations, that we bring upon us. If we stood still for a moment, waiting, we could also find joy.”

In recent years Van Ster has been responsible for the choreography of hit productions such as Marc Lottering’s Aunty Merle the Musical, Alistair Izobel’s Remembering the Lux and David Kramer’s Langarm, as well as being the resident choreographer on West Side Story. Oelf performed as dancer Marthinus Basson’s MISA, Lara Foot’s Fishers of Hope, Nadia Davids’ What Remains and West Side Story, amongst many other productions, as well as being the choreographer on the musical Calling us Home.

Figure of 8 Dance Collective highlights include Infecting the City Public Arts Festival, Afrovibes in Amsterdam, Cape Town Fringe Festival, Vrygrond Festival and US Woordfees. They have also been part of the Baxter Theatre Centre and Scenkonst Sörmland, Sweden’s hugely successful collaborations of I Hit the Ground Running in 2013, Struck Silent in 2014 and Adagio For A Hacked Life in 2016. The have also been part of the Baxter’s annual Dance Festival and Lara Foot's award-winning Fishers of Hope, with Oelf as a cast member and Van Ster as choreographer.

The Cape Times described their previous work as “performed with incredible tenderness and dexterity … this is another brave, boundary-pushing work by their Figure of Eight Dance Collective,” and Litnet called it “a phenomenal production by phenomenal artists.” Debbie Hathway for Bizcommunity said, "Grant and Shaun's connection is the kind that makes dance partnerships famous. Their performance magnetism goes deeper than pure technical ability."

This exciting new season will showcase theirs and other young talents and further expand the company’s repertoire, which they have managed to build up in a short space of time.

Dustin is based in Okiep, in the Namaqualand. He will be making a guest appearance, made possible by the kind permission of Dance Garage Ensemble headed by dance legends John Linden and Alfred Hinkel. Gabriela is from Vredenburg and a company dancer for Jazzart Dance Theatre.

Lighting design is done by Benever Arendse, set design by Carin Bester and the production manager is Marie Vogts. Bookings can be made online on Webtickets (www.webtickets.co.za) or at Pick and Pay. For discounted rates for corporate companies, schools, charities or fundraisers, or block-bookings, please contact one of the following people:
Sharon Ward: 021 680 3962 / sharon.ward@uct.ac.za
Carmen Kearns: 021 680 3993 / carmen.kearns@uct.ac.za
Marie Vogts:71 965 2870 / fo8dance@gmail.com

You can contact Marie Vogts for media enquiries, interview or picture requests.

Please note that the price for school block bookings is R50 pp.

What sets Figure of 8’s own creative work apart from others, is the truly original and innovative work they produce, especially in a ‘copy and paste’ and fast-paced world. The choreography they develop, combined with an astute theatrical understanding and evocative storytelling have moved audiences deeply over the years. The balance between addressing necessary and important issues, while entertaining and captivating an audience has always been a core component of their productions.

Figure of 8 Dance Collective seeks to inspire young adults through their work. They have worked collectively and independently with some of the most legendary and innovative South African and international choreographers and dance theatre companies. It is their strong belief that they can encourage the youth to become more self-aware, to rise above circumstances and have the freedom to dream through the language of dance and theatre

Grant van Ster (Choreographer and dancer)
Grant Van Ster is a Cape Town based professional teacher, dancer and choreographer. He graduated from the three-year Adult Training and Job Creation Programme at Jazzart Dance Theatre in 2005 under the directorship of Alfred Hinkel. He officially joined the Jazzart Theatre Company in 2006. He was a company member for eight years where he received extensive training and practical experience.

In 2014, he co-founded (with Shaun Oelf) the Cape Town based Figure of 8 Dance Collective (F08) which specializes in the development and presentation of innovative, exciting, thought provoking and aesthetically pleasing South African contemporary and theatre dance. FO8 won the Dance category at the 2016 Cultural Affair Awards. FO8 travelled to the Netherlands in 2015 and participated at the prestigious Afrovibes Festival in Amsterdam. Further FO8 performances include the Cape Town Fringe Festival, Infecting the City (Public Arts Festival), Dance Umbrella, Baxter Dance Festival, Vrygrond Festival and various collaborations with Youngblood Arts and Culture Development. He has extensive international dancing experience and has performed in the Seychelles, Namibia, Sweden, the Netherlands, Austria, Germany and South Korea. Van Ster regularly collaborates with an array of dance companies. He has worked with Jazzart Dance Theatre, Cape Dance Company, Free Flight Dance Theatre, Bovim Ballet and Dance Garage.

In 2011, Van Ster was commissioned by the Baxter Dance Festival where he subsequently created the acclaimed production Paradigm Shift – a work exploring the human body and its ability to move beyond its natural design.

Grant has been part of the Baxter Theatre/Sweden’s Scenkonst Sormland three-year collaboration since its inception. He danced in I Hit The Ground Running (2013), acted as assistant choreographer in Struck Silent (2014) and choreographed Adagio for a Hacked Life (2016).

In 2017, Grant took on the role as assistant director for the musical, Calling me Home, by Shy Music Productions that debuted in Johannesburg (Cape Town Season: 2018). Following up from that, he became head choreographer for the sold-out musical of Mark Lottering, Aunty Merle: The Musical hosted at the Baxter Theatre (2017/2018) as well as the choreographer for David Kramer’s Langarm (2018/2019) He has worked together with Alistair Izobell on a variety of performances including Remembering the Lux (2016), Kaapse Jol and Breaking Free (2017).

Shaun Oelf (Choreographer and dancer)
Shaun Oelf is a professional dancer, choreographer and teacher. Born in Johannesburg and raised in Knysna, he started dancing in 2006 when he joined the Jazzart Dance Theatre’s Young Adult Training and Job Creation Programme. After graduating from the programme, he joined Jazzart as a dancer.

Oelf has been the recipient of multiple awards and nominations as a dancer, actor and for his other creative endeavors. In 2014, he won the Baxter Theatre Artist of the Year Award and was nominated for a Naledi Theatre Award in 2015 as Best Supporting Actor in Lara Foot’s production of Fishes of Hope.

In 2014, he launched the Cape Town based Figure of Eight Dance Collective (FO8) with co-founder Grant Van Ster. FO8 specializes in the development and presentation of innovative, exciting, thought

He has worked together with Ina Wichterich on several occasions, including Work in progress (2016), a solo production, It’s Ok (2017) and MI(SA) (2019). In 2017, Shaun took on the role as choreographer for the musical, Calling Us Home, by Shy Music Productions that debuted in Johannesburg (Cape Town Season: 2018). In 2018 he choreographed Limitless Self for Jazzart Dance Theatre November 2018 Season. He also performed in MI(SA) directed by Marthinus Basson and choreographed by Ina Wichterich, that debuted at the US Woordfees 2019. At the US Woordfees 2019 Shaun Oelf also performed in an original Figure of 8 work, titled Couched. Couched was one of the only two dance productions at the festival and this was also the first year that there were fully fledged dance productions hosted at the festival.

Dustin Jannetjies (Dancer)
Guest artist by kind permission of Garage Dance Ensemble
Based in Okiep in the Namaqualand, Dustin Jannetjies studied dance as a school subject, under Dawn Langdown. He graduated O’kiep High School in 2015 after which he continued his training under the competent hands of John Linden and Alfred Hinkel. Productions that he has performed in for Garage since 2015 include: Garage annual community performances, 2016 Tour to Qatar, Sylvia Vollenhoven’s Keeper of the Kumm, directed by Basil Appollis (Grahamstown and Artscape), Pros and cons of hitch hiking by John Linden (Baxter Theatre), Water from an ancient Well by John Linden (Artscape), Bolero by Alfred Hinkel (Baxter Theatre), Mooi genoeg om Engels te praat by John Linden and Alfred Hinkel) (Northern Cape tour). He was also part of the following productions:
- Dans van die Dors Siel - Linden & Hinkel (2017)
- Art in the garden - Linden & Hinkel (2016 & 2017)
- Theatre in the backyard  and Die Onthulling - Mhlanguli George (2018)
- Mooi genoeg om Engels te praat (2019)

Gabriela Dirkse (Dancer)
For as long as Gabriela can remember, the young Gabriela always wanted to sing or dance on stage. Either one of them would have been just great but, dance is what stole her heart in 2013. She entered as a trainee at Dance for All (Athlone) in their one-year bridging programme under the mentorship of Philip Boyd and Allison Hendricks. She graduated from the programme with flying colours, even though it was the first time she ever had dance training.

After graduating she entered into a performing arts duo with Tanzley Jooste under the management of Bridgette Brukman. They ran under the name Lollipops on the Move. They did their first ever back up dance for Karin Kortjie at Alistair Izobell’s famous show Music a la Kaap and that’s where it all started. They performed together with Loukmaan Adams which also included artists, Karin Kortjie, Robin Peters, London Louw and Vincent.

Her journey with Jazzart consisted of working with Dane Hurst and the Brouhaha International Carnival in Liverpool, UK. She has done multiple corporate performances, choreographed by Gregory Maqoma, for companies such as Clicks Roadshow, Caltex, Old Mutual, SABS and many more.

Theatre performances include Time, In Motion, Our Women, Archives and Nexus. Further collaborations with people include Mandla Mbotwe, Martin Shaunberg and Sbonakaliso Ndaba. She was part of Grahamstown National Arts Festival in collaboration with Dane Hurst as well as Marthinus Basson’s MI(SA) that debuted at Woordfees 2019. In both cases she shared the stage with Shaun Oelf.