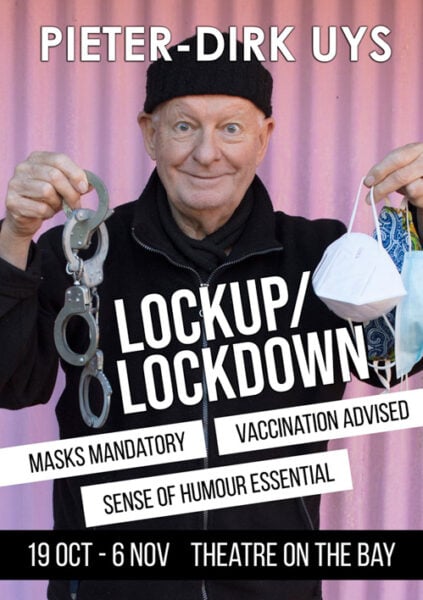 After 19 months of lockdown each of us has our own unique story to tell. Previous daily routines have been uprooted. Jobs have disappeared. Families have been disrupted. People we know have died.

In March 2020, I had just finished three productions at the Stellenbosch Woordfees. Then came the breaking and brittle news that a new virus was on the way from the other side of the planet. But this was Cape Town. Nothing that awful ever happens here, unless we do it to ourselves. Even as a child I remember whispers about the possible Third World War breaking out in nuclear mushrooms. But we believed it would be in the northern hemisphere and all we would see were toxic clouds!

My next five months of performances were booked and sorted out and I was ready. Starting with a three-week season at the Fugard; into April, with a four-week booking at Pieter Toerien’s Montecasino in Johannesburg; then off to London for four weeks at the Soho Theatre, taking me to the end of July. Sorted.

But within a few hours on that fateful Friday 13 March 2020, everything vanished. First the Fugard phoned and said: "Sorry, we’re closing down immediately. The virus is here!"  I tried to lighten the conversation. "Jan van Riebeeck took eleven months to bring his virus of colonialism to the Cape of Good Hope," but no one had time to laugh. The gogga needed just ten hours in a Boeing to get to our South African lungs.

A second call was to tell me my Johannesburg booking was indefinitely postponed. By the time I got home to Darling, my former full diary was blank. A first for me in almost 50 years. The Broadway Theatres were boarded up in New York; London’s West End and the Soho was closed. And my theatre in Darling, my beloved Perron, it too, now dark. It took me four days to realise that I was now in forced retirement.

I was not alone. Actors, directors, performers, musicians, singers and dancers, all shared a collective gasp of disbelief. We were all in the same boat, as the captain said on the Titanic, except in this case the iceberg was also in the boat. No audience, no income, zero, zilch.

Level 5 became a new way of life. Strange new words, pregnant with threat and menace, joined familiar old enemies. Lockdown was added to load-shedding, social distancing, co-morbidities. No handshakes, just a fist bash or a elbow tickle. Wear a mask at all times. Wash everything you’ve stocked up on: tins, bottles, packets and surfaces, because the experts have made it very clear: the virus can live on surfaces for days!

Every expert on earth was on television. The former Head of Viral Research said one thing. The former Surgeon-General said another. The former Professor of Pandemics pointed out that even once infected, one might not even know one had the virus. Infections could be carried from one person to the next without anyone knowing. A deadly, invisible enemy. At least we had a Minister of Health with an honest face – Dr Zweli Mkhize.

Weeks became months. Months have become nearly two years. Millions of people died. Home became sweet home. Every day felt like Tuesday. I discovered a tall tree in my garden that seemed to have appeared overnight. I became aware of so much bird song, not just the resident hadadas shrieking from vertigo. I had never made the time to look closely at all that lived and breathed around me. Rushing from one theatre booking to the next for month on end and only popping into my home for a brief hello and goodbye. My dogs thought I was a burglar. My cat was glad the butler was back.

I grew a beard because the woman in my life was in quarantine somewhere else – Evita Bezuidenhout and without a hairdresser. She soon discovered that every brown cloud has a silver lining. Boer maak ’n plan! She adapted and did not dye – ready to embrace the New Normal. But can anything ever be normal again? Covid is here to stay, maybe Covid-19 will make way for Covid-22.

Many lessons have been learned. We’ve come to realise how much we just took for granted. At least now, after what felt like a life of Tuesdays, I can start filling in my dairy – but in pencil, only to be inked-in 24 hours before the event, just in case! The elections are looming. Send in the clowns.  The theatres are open again. Political clowns. More material for me than I could ever have dreamed up myself.

For decades I had often said: if only I could take off a year. Something was listening!

Pieter-Dirk Uys presents "Lockup/Lockdown" at Theatre on the Bay from 19 October to 6 November. Book at Computicket