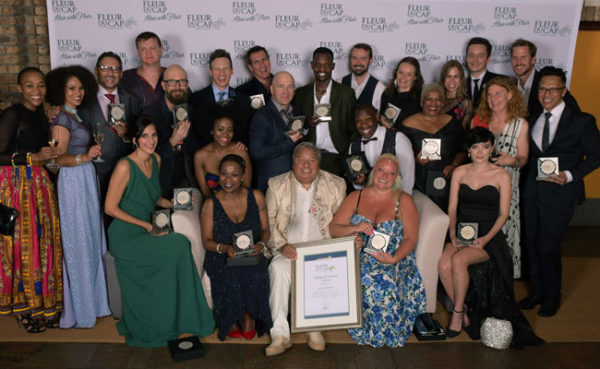 The winners of the 53rd annual Fleur du Cap Theatre Awards were announced on Sunday, 18 March 2018 at the Baxter Theatre in Cape Town.

For more than five decades the Fleur du Cap Theatre Awards together with Fleur du Cap Wines have been honouring excellence in theatre, at this theatrical spectacular that is a highlight of the Mother City's cultural calendar.

Winners are chosen from productions performed at professional theatre venues in and around Cape Town. Theatre practitioners are recognised for their acting, directing, staging and technical abilities. Category winners received R15 000 and a medallion.

A total of 115 productions from the year under review were eligible for consideration. The awards, considered in 26 different categories, include special awards for Lifetime Achievement which went to Alvon Collison, and the Award for Innovation in Theatre was shared by Imbewu Trust and Kunste Onbeperk.

Five MakuAsh Residency students from Makukhanye Art Room, as part of their training supported the backstage team and in the process received valuable experience.

The evening concluded in elegant style with guests enjoying a celebratory night cap and desserts.

Award for most promising student

What Remains by Nadia Davids

Jon Keevy for The Underground Library

Best performance by an ensemble

The Cast of What Remains

Best performance in a revue, cabaret or one-person show

Isabella Jane in Evita as The Mistress

David Dennis in Priscilla Queen of the Desert as Bernadette

Wilhelm Disbergen for What Remains

Greg King for Suddenly the Storm

Best performance in an opera – male

Lukhanyo Moyake in Rigoletto as The Duke of Mantua

Best performance in an opera – female

Award for innovation in theatre

Best performance by a supporting actor in a play

Best performance by a supporting actress in a play

Robyn Scott in Shakespeare in Love as Elizabeth I, Ensemble

Best performance by a lead actress in a play

Faniswa Yisa in What Remains as The Archeologist

Best performance by a lead actor in a play

Jay Pather for What Remains